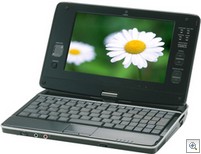 I’ve spent just under a week working with the Vye S37 UMPC. (See the InkShow on this here.) There are some things I really enjoy about this device and some things that need some attention. By and large, this could be a handy portable device for many, assuming you don’t need to do any Inking. I do. But if you’re mobile and need to quickly handle some email or work online, the performance of the device is more than enough to let you do so efficiently. Here’s a quick rundown of what my thinking is today.

With only 1GB of Ram the Vye S37 is running much snappier than I ever anticipated. I’m sure if I upgraded it to 2GB (it is an evaluation unit loaned from Dynamism, so I won’t be doing that) it would impress even more. Moving in and out of a sleep state is quicker than any device running Vista that I have seen. (Sorry, I don’t have any times here as it has been a busy week.) I’d highly recommend planning an upgrade to 2GB of memory for this device if you need to do any multi-tasking. If fact, I don’t recommend running Vista on any device unless you’ve got 2GB of memory under the hood. When going from AC-Mode to Power mode, the default power scheme will drop this UMPC from Aero Glass to the Vista Basic power scheme. That’s not a nit-pick, just an observation.

It has handled everything I’ve thrown at it reasonably well. I’ve experienced the occasional hiccup with sound and video playback, but nothing that I don’t see on other devices running Vista.

Without WiFi turned on in rehearsals, I’m getting easily over 5 hours consistently. I’m running a 6 cell battery. In the InkShow I mentioned that this battery felt a bit loose in the housing. It still does. It hasn’t gotten worse, but it makes me nervous about grabbing that battery as a handle. While I’m not sure using the battery as a handle was ever intended, the larger battery almost begs for you to do that.

This is a really bright screen, even when running its dimmest mode. I like that. I’m able to squeeze more juice out of the battery on the dimmer levels and not compromise viewability.

This is an annoying factor, and I’ve seen it on other devices as well. Occasionally, after returning from Sleep mode the touch screen doesn’t work at all, necessitating a reboot. After rebooting, I will have to recalibrate the screen. This has got to be a driver issue somewhere in Vista.

Try as I have, I haven’t been able to work efficiently with the small keyboard. My hands just don’t fit the form factor. Now, that is a personal issue, more than it is a problem with the keyboard. I’m sure others will find it suitable. The layout of the keyboard actually makes a good deal of sense for its small size.

I mentioned the spongy screen in the InkShow. It isn’t really a hindrance to operation, but it does give me pause. When I’m using a touchscreen I’m poking the screen quite hard at times. While I think it will hold up over the long run, it isn’t something that I find attractive. The shiny black case is a real fingerprint magnet and can look pretty greasy after a day’s worth of work. That said, while the screen picks up fingerprints and residue from my fingers, it isn’t nearly as annoying as I see on other screens. The spacer in the CF card reader slot (I don’t have any cards inserted) tends to pop out at the slightest touch.

Some Updates From the InkShow

I mentioned a couple of issues in the InkShow with rotation and the fan. The fan has two modes, quiet and normal. The default was ““quiet modeÃ¢â‚¬Â which as I reported left the unit running very hot after a slew of Windows Update. The issue with rotation turning off can be fixed as described below. Although it is interesting (and this isn’t an issue with just the Vye,) that updates break things that are working. After posting the InkShow, I heard from the folks at VyePC with the following:

Had a chance to look at your video and thought you may like to know a couple of things which may help.

1) https://www.vyeusa.com/support.php have a new bios update which defaults the unit to Ã¢â‚¬Ëœnormal’ mode fan on a reboot.

2) If the Intel video drivers have been upgraded beyond version 7.14.10.1272 (they are the defaults on the c: drive to be able to be reinstalled) then the rotation buttons will no longer work.