Would You Be Willing to View Ads on Your Phones In Exchange for Cheaper Phone or Service Price?

Amazon’s done it on company’s Kindle e-readers by offering consumers cheaper hardware pricing in exchange for displaying ads on the e-readers. Now, it looks like ads are coming to some Android smartphones by way of the OS’s notification drawer on Japanese carrier KDDI.

According to Engadget, the carrier bundles its own third-party app store known as au one Market, which is a replacement for Google’s native Android Market app store, and the third-party store can push ads to the Android system notification drawer. The problem here is that the pre-loaded carrier app store cannot be removed, and most average consumers wouldn’t want to root their devices to get rid of KDDI’s storefront to eliminate the display of ads. 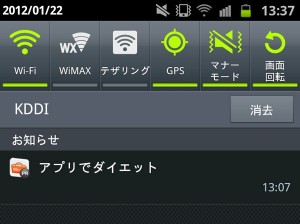 With ads potentially generating extra revenues for carriers in the competitive space, the possibility down the road may be akin to Amazon’s strategy of offering consumers cheaper hardware or discounted contract plan pricing. Would you be willing to have ads pushed to you in exchange for cheaper hardware?

Ads on smartphones, if done correctly, can be more relevant and useful to consumers thanks to the use of GPS, which could be integrated with location-based information for targeted ads, browsing data, and other information from a phone.

In the U.S., dueling factors make ads beneficial and detrimental to the consumer smartphone experience. On one hand, consumers value privacy, but on the other hand, American consumers–unlike their European and Asian counterparts–may not be willing to spend as much for hardware or plan pricing.