We still don’t have any idea what Google has up its sleeve for its next Nexus smartphone but that hasn’t stopped creative minds from dreaming up what a Nexus smartphone of the future could look like.

CNET UK has found a new Nexus concept, created by Dorian Lust, that might just be the Nexus smartphone of consumers dreams. Or nightmares, it depends.

The device is called the Nexus D and it’s Lust’s vision of a new Nexus smartphone of the future.

The Nexus D features a curved display and it also has a kickstand, something that is found on several Android smartphones, and something that would make watching TV shows and movies on the Nexus a lot easier. 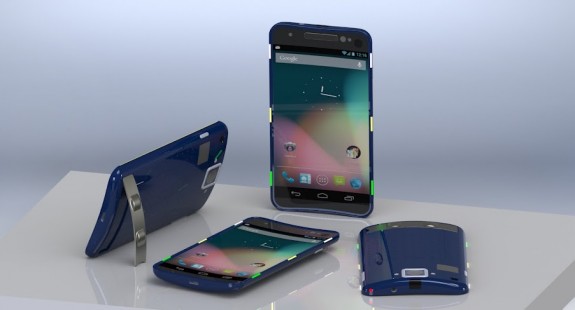 The Nexus D, by Dorian Lust, in all of its glory.

That’s not all either. The Nexus D apparently is powered by a quad-core 1.8GHz processor, 1.5GB of RAM, and comes in two variants. A 32GB model and a 64GB model. Those don’t seem too out of the realm of reality either. The next Nexus smartphone could very well feature a quad-core processor and the RAM and storage options are fairly down to earth.

Something else that the Nexus D has, that will likely appear in the next Nexus, is an NFC chip for use with mobile payment services like Google Wallet.

Other features include a shock resistant design, a fingerprint scanner, a laser pointer, and a cornea scanner for extra security.

As for the next Nexus itself, nothing is yet known about the device or devices that will replace the Samsung Galaxy Nexus as Google’s flagship Nexus smartphone.

We’ve already taken a look at what to expect from a device that will likely take on the iPhone 5 and Galaxy S III for smartphone supremacy.

Here is what we expect to arrive on the next Nexus:

Google has not yet said when it might release the device though it announced the Samsung Galaxy Nexus alongside Samsung at an event in October and was released in the United States in December and something similar could happen in 2012.

One thing that we do know is that it won’t be the Nexus D that gets unveiled.

Would you buy the Nexus D if it were to become the next Nexus smartphone?