Steve Wozniak, the Apple co-founder and friend of Steve Jobs talked with the Associated Press last night after learning of Jobs’ passing. He tearfully described his reaction to the news and reminisced about his early days with his friend as they worked together to change the world of technology. Probably my favorite line from the interview comes when he discussed working together to create the first Apple computer.

“We went into the garage as young people without any money …” and they emerged many years later as billionaires and probably more importantly birthing revolution that changed the lives of nearly every person in the developed world.

Theirs was a symbiotic relationship. Woz said, “He was always pushing me as an engineer…” asking him to add one more feature or change more thing to make it better. Some of what he asked seemed impossible but Woz pressed on and together they created something special.

Most poignantly, Woz described his friend saying, “The world lost a John Lennon” referring to the late Beatles singer and song writer who was killed in the seventies after changing rock and roll. 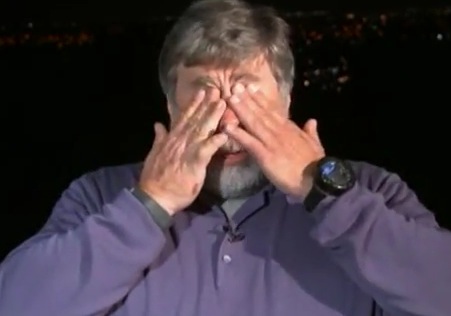 If you’d like to learn more about the early days of Apple, let me recommend a great read. iWoz by Steve Wozniak shows the man’s wide-eyed enthusiasm for technology and provides great insight into what makes him tick. I’m also looking forward to the forthcoming biography of Steve Jobs which will be released on October 24.