Tablet’s are definitely in the Army now!  In this article on DCMilitary.com, you can learn about the use of Tablet PC’s at the Walter Reed Army Medical (WRAMC).  As you will see from reading this story, they did have their challenges with security in an obviously “need to be secure environment”.  It would have been easy to blame the Tablet equipment, but as you will see, they persisted and discovered another culprit:

“The equipment, which was given to Walter Reed, worked perfectly — until technicians put it all on the same system. For four months, providers dutifully scribbled their patient notes on Tablet PCs, often losing data as it was transmitted to the server. Finally, the vendors met with each other to discuss a solution, deciding to conduct “sniffer traces” on the equipment devices with the idea that the network itself was at fault. 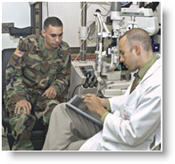 The vendors found that the multiple security systems were causing a network problem as both types of equipment required authentications, and a “handshake” between the two was not being made. To correct the problem Cisco had to rewrite the code that handled data transmission for the Wireless Area Network and DOIM engineers had to move one of the vendor systems behind the other to require only one level of security authentication. “Correcting the system took great coordination and a high level of troubleshooting from our DOIM engineers and the vendors involved,” said Arthur Doutt, TIAG, project mfor the DOIM.

The level of security offers enough complexity to detect unauthorized devices or users by triangulating among three wireless access points in the clinic, meeting the unique challenges imposed on a military hospital.

“The important thing is that neither side gave up,” McVeigh said. “We’d get frustrated with the situation but I reminded the staff that progress is painful.”

Hmmm, what kinda Tablet PC is that?