A few days into my quest to replace my iPad with the Google Nexus 7 Tablet and so far so good.

I don’t do a lot of writing on my iPad, but when I need it using the iPad and my Logitech Bluetooth Tablet Keyboard does the trick.

I wanted to test using the Google Nexus 7 Tablet for writing to see if I could get the same amount of work done on the Nexus 7 as I can on my iPad.

The short answer is Yes! I took a trip to my favorite local Wi-Fi Hotspot, ordered a bagel and tall cold Diet Coke and set up my keyboard with my Google Nexus 7 Tablet. It paired perfectly and worked great. I use the Logitech keyboard designed for the iPad, and it still works. The Logitech Android Tablet keyboard is available for $49.99 on Amazon.

I’m using Evernote and the keyboard to write this post. I find that the tablet works best in portrait mode. I turned it to landscape to do a little typing, but I prefer to use it the other way. 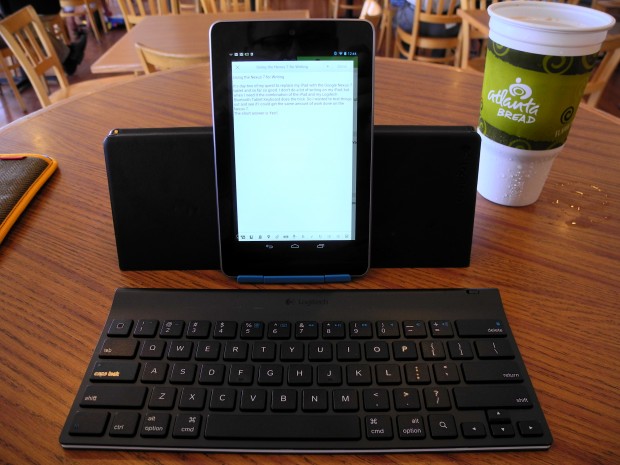 As I wrote in my first post about making the switch, I prefer the iWork apps on my iPad for writing. However, working in Evernote on the Google Nexus 7 Tablet works well and I can sync my missives back to my computer for final editing. For those who need more, look for either Documents to Go or QuickOffice, both of which work well on the Nexus 7.

The Google Nexus 7 Tablet suffers the same problem the iPad suffers. I still can’t find a good workflow for editing blog posts. I can type up the text and even upload it to WordPress using the Android WordPress app, but taking photos, editing them and then inserting them into posts still eludes me on a tablet of any kind. I can’t find an app that can insert photos easily into WordPress posts and WordPress doesn’t let you access the Photos gallery on a tablet yet. 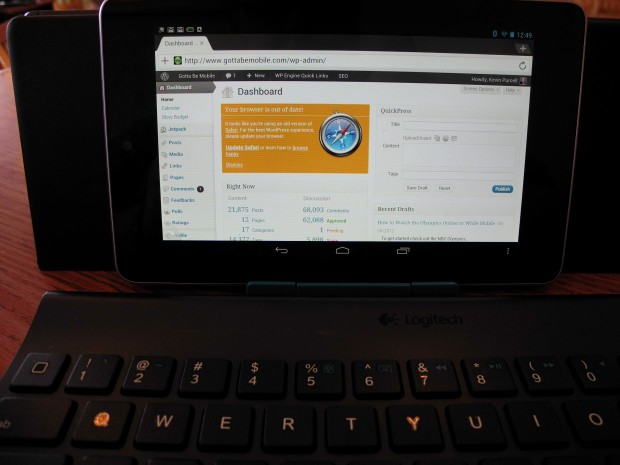 Finally, I find that interacting with the small screen while the Google Nexus 7 Tablet rests on the Logitech stand forces me to occasionally pick up the tablet. It’s awkward to touch the controls near the bottom of the screen while on the stand. That’s a minor issue and its the same on the iPad.

Can I use the Google Nexus 7 Tablet for writing? Sure! Just as effectively as I can the iPad, so the switch continues without an issue. The iPad and the Nexus 7 work fine as occasional editors or for simple text. Neither work well for formatting of Internet posts and I’m still looking for a good page layout tool on Android that works as well as Pages on the iPad.