Microsoft, makers of the Xbox One, is getting ahead of this week’s holiday in the United States by revealing the games users can expect through its Games With Gold program a bit earlier than it normally would have. New titles available at no additional charge for players in December include Thief for the Xbox One and Sacred 3 for the Xbox 360. 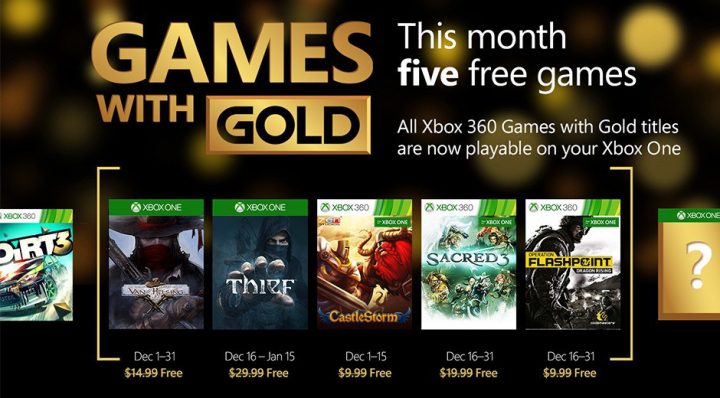 In December Xbox One owners will get roughly $45 in video games to add to their digital library. Thief is $29.99 and was a sufficiently high-profile launch for the Xbox One and Xbox 360 back in 2014. It was developed by Eidos and published by Square Enix. As the game’s title suggests, the game is all about stealing from the rich. Thief is completely a single player experience. The title won’t become available until December 16th. It’ll stay available until January 15th, overlapping with the Games with Gold titles coming next year.

Kicking off December is The Incredible Adventures of Van Helsing. It costs $14.99 through the Xbox Store. It’ll be available the entire month before it’s replaced by other games.

Microsoft said earlier this year that it had plans to give Xbox Live Gold users Games with Gold titles that would that would also be a part of the Xbox One Backwards Compatibility program. The idea is, that users who have an Xbox 360 can redeem these titles and then take them and their game saves to the Xbox One without having to pay for a game upgrade or any extras. Xbox 360 users can expect Castle Storm to be free from December 1st to December 15th and Sacred 3 to follow it from December 6th to December 31st. Flashpoint will join the other two games on December 16th and run until December 31st too.

Again, the Xbox 360 titles are free for Xbox 360 users to keep. All titles in the Games with Gold need to be downloaded directly from the Xbox Store. As such, users might want to keep the amount of data they’ve used in mind when redeeming them. Some internet providers are instituting caps on the amount of data that users can consume within a single month.

Xbox Live Games with Gold is Microsoft’s attempt at giving users some lasting value. Xbox Live Gold has long been required to play games online but Sony changed everything when it began giving gamers with a PlayStation Plus subscription game downloads at no additional charge. Microsoft introduced the program for the Xbox 360 before the launch of the Xbox One. Lovers of single-player games didn’t have a lot of reasons to keep their Xbox Live Gold subscription after Microsoft made installing and using entertainment apps free for everyone. With Games with Gold they do.

Xbox Live Gold costs $60 a year or $9.99 a month. For a limited time, Microsoft is offering users the opportunity to join Xbox Live for $1 for their first month. Users who take advantage of the sale get to play games online, take advantage of these free titles coming in December and get deeper discounts on games in Microsoft’s Xbox Black Friday 2015 sale.