Microsoft’s Xbox Music announced the deal earlier today, saying that it wanted to “show appreciation” for its users by giving them copies of the rap idol’s latest album. Users can download the album in explicit and edited versions at absolutely no charge, provided that they have one of the four platforms that allow users to purchase tracks from the Xbox Music Store, Windows RT, Windows 8.1 and Windows Phone 8.

Users who already own the album have reasons to rejoice as well. Microsoft has marked down all of Eminem’s previous albums to $.99 each. Users will need a device running one of Microsoft’s latest platforms to take advantage of this deal as well. 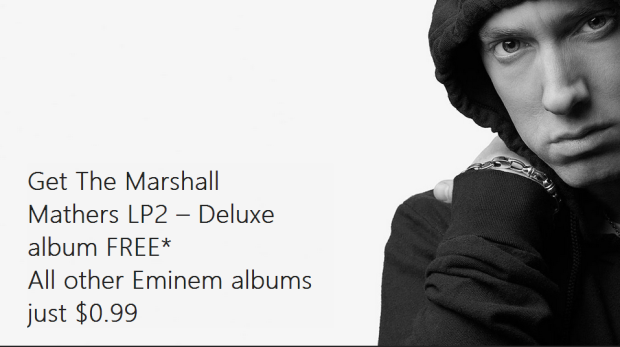 Microsoft is highlighting Xbox Music’s online-based equivalent too. All users can stream each of Eminem’s albums from Xbox.com at absolutely no charge. Normally, users would need a computer running Windows 8 to stream music without an Xbox Music Pass.

Though today’s deals are meant to highlight the breadth of Xbox Music, ironically, they also highlight the rather fractured nature of Microsoft’s entertainment experience. Microsoft allows Xbox Music Pass lovers to stream music on the Xbox One, Xbox 360, iOS, Android and Windows Phone.

Unfortunately, using any of these apps requires an Xbox Music Pass. That’s despite Microsoft offering free music streaming with advertisements to Windows 8, web and Windows RT users. Users can’t do something as simple as purchase a song through anything but the Xbox Music app for Windows 8 or Windows Phone 8 as well.

Users who meet the qualifications and want to grab to grab the free album or discounted past albums should definitely act fast. Microsoft says that the deal is only available “while supplies last,” indicating that the company plans to abandon the giveaway portion of the promotion after it hits a certain number of downloaded copies.

Only users in the United States can download The Marshall Mathers LP2 free.