Microsoft is in the midst of teasing what Xbox 360 games will be playable on the Xbox One when Xbox One Backwards Compatibility launches late next week. Meanwhile, what is described as a leak may have already ruined the surprise for gamers following reports about on the feature.

It was in a post on Twitter this week that Microsoft’s Mike Ybarra confirmed that the company plans to reveal what Xbox 360 games users will be able to play when the New Xbox One Experience launches on November 12th. Besides new apps and a revamped interface, the New Xbox One Experience includes an emulator that lets Xbox One users play their old games on Microsoft’s latest console. The company announced the feature to roaring cheers at this year’s Electronic Entertainment Expo.

Ybarra heads the engineering team behind Xbox. That includes the software that the Xbox One runs and the experiences for Windows 10. When asked on Twitter when we’d hear more about the titles included in Xbox One Backwards Compatibility at launch, Ybarra said, “For those asking we’ll announce the initial set of 100+ backward compatible titles on 11/9.”

For those asking we’ll announce the initial set of 100+ backward compatible titles on 11/9, a few days before our launch!

That’s where discussion would have stayed had it not been for recent rumors. Microsoft seems to have poured a lot of resources into getting Xbox One Backwards Compatibility up and running. The company is clearly hoping that teasing out information will keep users interested and convince them to purchase an Xbox One this holiday season.

Xbox Dynasty, a fan site for Xbox One fans, reports that it managed to get a list of every title included in Xbox One Backwards Compatibility at launch. Some we already expected, like Zuma and Trials HD. Others are very, very promising.

Every Halo game to ever be released on the Xbox One will be available through Xbox One Backwards Compatibility. So will Fable 2 and Fable 3. Every Assassin’s Creed game until Assassin’s Creed 3 will also be included in the program, the site alleges. Titles from the Far Cry, Forza, Rainbow Six, Bioshock, Splinter Cell and Bayonetta franchises are also coming. Unfortunately, Gotta Be Mobile isn’t able to confirm that this is indeed the list of games Microsoft plans to announce next week. That the list would mostly consist of titles published by Microsoft itself seems logical though.

Microsoft has confirmed that its working with Ubisoft, Bethesda, Disney, Majesco, Capcom, 2K, Square Enix, Sega, EA, Ubisoft and Warner Brothers to add titles to the library. The company also confirmed that it’ll add new games to the Xbox One Backwards Compatibility selection on an on-going basis. 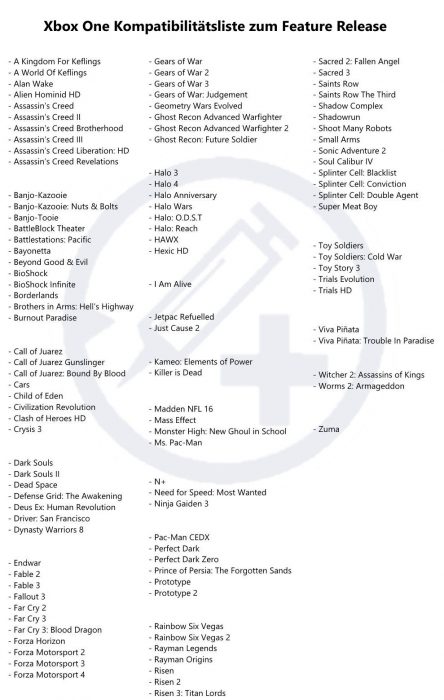 Titles said to be coming to the Xbox One with Backwards Compatibility, according to Xbox Dynasty.

Anyone who already has an Xbox 360 in their library won’t need to do much at all. Microsoft says that digital games in a user’s collection will simply show up in their Xbox One games library after the update. Users who have a compatible Xbox 360 game on disc will need to put that disc in their Xbox One to unlock a compatible digital download. Games in the program will behave as players expect; multiplayer is featured and so are parties and Xbox Live achievements. Users also get to stream and share game clips just like they would within an Xbox 360 game. Downloadable content for the games will need to be purchased online at Microsoft’s Xbox website as they won’t surface within the Xbox Store on Xbox One.

Xbox One Backwards Compatibility and the New Xbox One Experience updates won’t cost current or new Xbox One owners anything extra this holiday season if they already own the game. That’s a stark contrast when compared to PlayStation Now, which lets PS4 owners play PS3 games, but focuses on a monthly, daily or hourly subscription.