Make no mistake, holiday shopping seems to have kicked off early this year for those considering purchasing an Xbox One. New deals on Microsoft’s gaming and entertainment console are making it a terrific time to save in preparation for the holiday season.

It was Microsoft itself that kicked off this flurry of Xbox One deals. Late last week the company announced that users who purchased the Xbox One would get a free game with their purchase. The Xbox One deal, which effectively discounts the Xbox One upgrade experience by $60 only lasts this week. At the time, GottaBeMobile called it the best Destiny deal available since users could pick up an Xbox One for $399 and get the first-person shooter, which launches tomorrow on the Xbox One, Xbox 360, PS3 and PS4, at absolutely no charge. 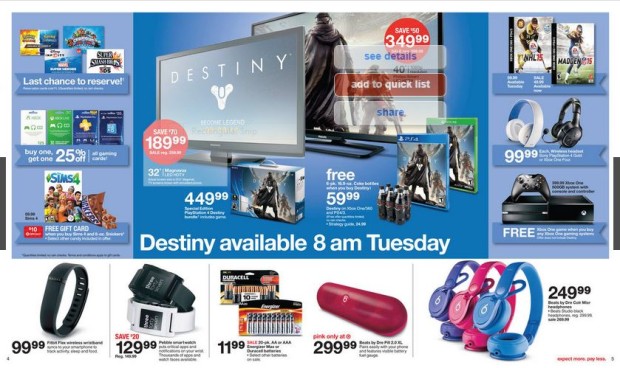 Target is building on that initial deal in a very interesting way. Online and in store, shoppers looking for an Xbox One deal can pick up the basic Xbox One for $399 and the Xbox One and Kinect bundle for $499. In addition to getting a free game with their purchase, Target shoppers can also save $20 on a subscription to Xbox Live and $10 on a controller. A subscription to Xbox Live normally costs $59.99 a year. A new Xbox One controller usually costs $59.99. The catch with this deal is that Target is limiting the free game that users get to just the two core Xbox One bundles. That means that users can’t purchase a Madden 15 Xbox One bundle and still get a free game like they can from other retailers, mainly the Microsoft Store. 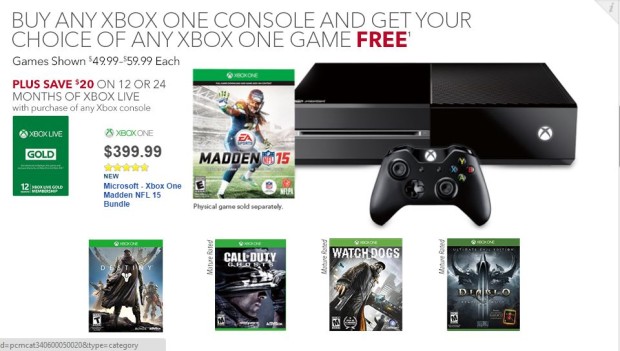 Whereas Target is passing on some savings on accessories as well as the free game the original Xbox One deal included, Best Buy is going all out to ensure that Xbox One buyers make their purchase with them. In addition to the free game, it’s handing out free memberships to its Games Club Unlocked service to all Xbox One and PS4 buyers. Users with memberships to Games Club Unlocked get 20% off new video games, see higher trade-in values on the games they trade in and a 10% discount on any used games they purchase. Like Target, Best Buy is also slashing the cost of Xbox Live Gold subscriptions by $20. Xbox Live Gold allows users to play games online against other Xbox One owners. Microsoft also gifts subscribers two free games a month. Unlike Target, Best Buy is perfectly content to let even those purchasing the Madden 15 Xbox One bundle get a free game.

Finally, Microsoft’s own retail chain is dropping huge deals of its own. Xbox One deal shoppers who purchase at the company’s stores on website stand to get a $50 Xbox Live gift card and a free game of their choice. Additionally, Microsoft is still letting users trade in their Xbox 360 or PS3. Those who do save a whopping $100 off the Xbox One as it is. The deals aren’t mutually exclusive and Microsoft is letting users take advantage of all three Xbox One deals at once. Buyers who take advantage of all three Microsoft Xbox One deals stand to save a $210 on games and extras. Effectively, users are getting an Xbox One without Kinect 2 sensor for $189 due to the $210 in free add-ons and discounts they’re getting.

Launched last fall, the Xbox One is Microsoft’s first revamped console in nearly a decade. In addition to playing games, the device supports entertainment apps like Netflix and Hulu Plus. The more expensive $499 Xbox One allows users to control their television set and cable box with their voice. Party and dance games can be played without a controller too.