We could see a PS4 or Xbox One GTA 5 release come before March 2015, as Rockstar confirmed that the company is working on a game for the new generation consoles in an earnings call with investors and analysts.

The GTA 5 release, and the GTA Online component which keeps the cash rolling, helped Rockstar pull in a record $2.35 billion in revenue for their 2014 fiscal year, and this continual flow of cash could help convince the company to deliver a PS4 or Xbox One GTA 5 release so that gamers can keep playing.

GTA 5 arrived in the fall of 2013, smashing sales records, and satisfying the demand for a beautiful open world game just weeks ahead of the PS4 and Xbox One release dates. Despite arriving at almost the same time there was no Xbox One or PS4 GTA 5 release in 2013, but with continual updates and additional GTA Online features Rockstar may be prepared to deliver a new version.

The Xbox One and PS4 are just about six months old and sales are still small compared to the number of PS3 and Xbox 360 consoles installed, so it makes sense that there is still no Xbox GTA 5 or PS4 GTA 5 option on the market. Even though Microsoft and Sony make the earlier consoles there is no backward compatibility so gamers need to keep the old console and keep it connected to a TV in order to play. 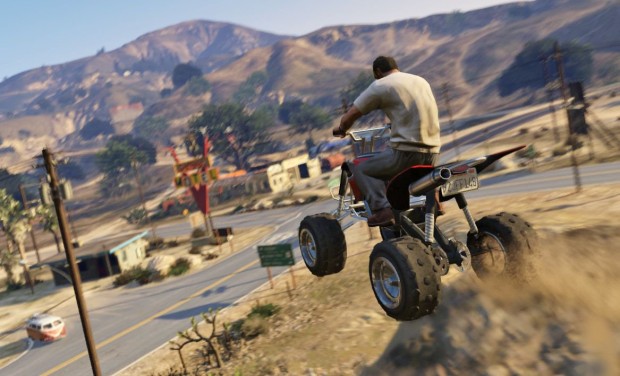 An Xbox One GTA 5 release and a PS4 version may arrive before March 2015.

If Rockstar does offer an Xbox One GTA 5 release it could drive additional sales of the games, as users will not likely get a free upgrade, especially if this updated GTA 5 requires a year-and-a-half of work. Watch Dogs delivers a new open world gaming experience to the Xbox One and PS4 on May 27th, which could draw some attention away from GTA 5.

During an earnings call with investors Strauss Zelnick, Take Two Interactive CEO, confirmed the company is working on a game for the Xbox One and the PS4 that will arrive before the end of March 2015. Zelnick said, “Rockstar Games is hard at work on their upcoming lineup, and we’re excited about what they have in store for the new generation of systems this fiscal year,”This fiscal year ends on March 31, 2015.

Overall this is a small confirmation, but it hints at the timing of the first Rockstar game for PS4 and Xbox One. It is possible that the game will come earlier than this date, and a fall release in time for the holiday shopping season is always a possibility. There is no mention of a PC GTA 5 release at this time, but recent reports and rumors suggest the company will deliver this near the Xbox One or PS4 release date.

The E3 2014 conference kicks off in June where Sony, Microsoft, Nintendo and a collection of other companies will talk about new games coming this year and in 2015. Rockstar is not normally at this event, but a rumor suggests Sony could announce the PS4 GTA 5 release on stage. It’s not clear how that announcement would factor into an Xbox One version, but Sony is working hard to lock in timed exclusives on games to tempt gamers to go PS4 when they upgrade.

An Xbox One price drop this month puts the price of the Xbox One at $399, the same as the PS4. This new cheaper Xbox One comes without a Kinect, but for users that simply want to play games like GTA and Watch Dogs this may not be a big deal. A cheaper Xbox One could spell trouble for Sony, which could lead to a big push to gain a timed GTA 5 exclusive for the PS4.

GTA 5 is an open world game where players can complete missions and roam the city to explore areas to discover secrets and easter eggs. In addition to completing the missions there are many small games to play. The GTA Online component is also full of missions and jobs that gamers can team up on, and even create. The online component is an area that gamers can play over and over again, and with $66 million in in-app purchases earned by February expect to see Rockstar look for a way to bring more gamers to GTA Online.