There are just  three weeks left until the official Holiday 2014 shopping season kicks off and savings on Microsoft’s Xbox One console are starting to stack up. Last week Microsoft announced it’d be discounting all Xbox One bundles by $50. A new Best Buy deal builds on that. Trading in an Xbox 360 with 250GB of storage or a PS3 Slim means users can upgrade to the Xbox One for just $200.

Best Buy quietly began letting shoppers trade-in their Xbox 360 and PS3s in for a deep discount on the Xbox One on November 2nd, according to details available on its website.

Those who trade-in a Xbox 360 with a 250GB hard drive or a PS3 slim are guaranteed $150 in credit towards the purchase of an Xbox One, making it the easiest its ever been to upgrade. Users can save more if they have an extra wireless controller. Best Buy is guaranteeing shoppers $10 for every one of those that they trade-in. $100 in the offer is the actual trade-in credit for the console. The other $50 is in the form of a coupon on the Xbox One itself. Buyers can use the $100 credit on anything they want, but the coupon is only good for the Xbox One.

Owners of those two consoles stand to get the Xbox One at just $200, before taxes, but those aren’t the only consoles Best Buy is accepting. It’ll give $50 in credit towards the Xbox 360 for any working Xbox 360 or PS3 regardless of capacity or design. 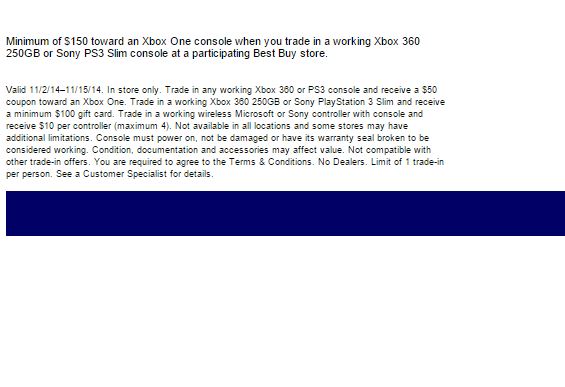 Xbox One shoppers have until November 15th to take advantage of this Xbox One trade-in deal. After that, the coupon will disappear and Best Buy will go back to only giving those who trade in the Xbox 360 with 250GB of storage and the PS3 Slim a flat $100 in credit.

Best Buy says not all of its stores are taking Xbox 360 trade-ins, but does provide a searchable database of the stores that are. Shoppers will want to avoid Best Buy Mobile locations and look for stores with a “Trade-In” logo on their homepage. Of course, calling your local store before heading out isn’t a terrible idea either.  Unfortunately, the extra coupon is only for those who trade-in at one of Best Buy’s retail locations.

With this latest deal, Best Buy shoppers stand to get the best deal on a video game console ever. Even before it announced a price cut Microsoft revealed three new holiday bundles that offer free copies of the season’s must-have cross-platform games.

Read: Xbox One Bundles: Which to Buy

Microsoft began selling the Xbox One with Kinect 2 sensor and no bundled games last year for $499. Clearly, waiting to pick up the console has worked in user’s favor.

Whether all of these discounts and the savings that stems from not having to purchase a game separately well help boost holiday sales isn’t up for debate. The question is whether it’ll be enough to propel the Xbox One to the top of the charts and ahead of Sony’s PS4 gaming console. It too launched last year, but cost buyers $349. It’s been leading the Xbox One in sales ever since.