A new video from AMD showcasing the power of its new A-series APUs also helps show the graphics capabilities of the upcoming Xbox One and PlayStation 4.

Both new video consoles use custom Jaguar processors from AMD, which use the same technology as the A-Series chipset the company produces for PCs. While this new video shows off the graphics of the A-Series line, it can also serve as an example of what console gamers can expect from their games if they buy an Xbox One or PlayStation 4 later this year.

The video, first spotted by BGR, called “Be Invincible” shows four soldiers with enhanced armor fighting what looks like an army of creatures made of energy. While the creatures themselves don’t have much detail, they do help show off how well the new chipset can handle lighting effects as they have many reflective surfaces on their body.

The humans in the video look much more impressive, as they have much more texture and detail. The video is likely pre-rendered so it’s not an example of what gameplay will look like, but that doesn’t make the facial expressions and realistic lighting of the commander in the trailer any less impressive.

As the human soldiers take to the battlefield the video shows off how many specific characters can appear onscreen at one time, and the fluid motion of each. The soldiers’ weapons also show off more of the lighting effects that are possible with multiple points of light interacting with objects in the environment. 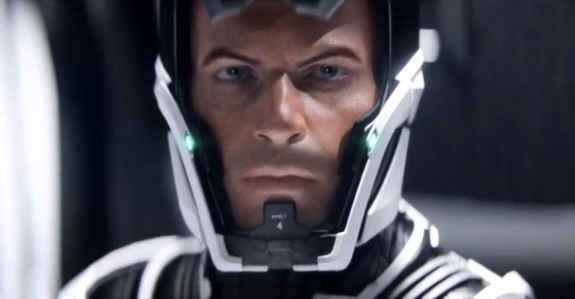 Actual gameplay of games on the Xbox One and PlayStation 4 may not look quite like the AMD trailer, but should still look better than what current consoles are capable of. Most trailers shown of next-generation games featured pre-rendered assets, so it’s hard to say what they’ll look like.

Sony showed a few minutes of gameplay of Killzone: Shadow Fall at the PlayStation 4 launch event, but Microsoft hasn’t shown gameplay footage of any game for the Xbox One yet. That should change at E3, however, as both companies will want to show off what their new consoles can do.