Xbox One Price Cut Arrives with PS3 Trade in Deal

Users aren’t exactly hurting for PS3 trade in deals but that isn’t stopping Microsoft from adding to the confusion with a deal of its own. Reports indicate that Microsoft is offering a PS3 trade in deal worth $100 – provided that users use the money towards its Xbox One gaming console.

Microsoft revealed the PS3 trade in deal in emails sent directly to users today. A post on gaming forum NeoGaf was among the first post pictures of the email being sent out to users. That email invites users to “ditch your PS3 and get $100 [in] store credit towards Xbox One.” It goes on to invite users to let Microsoft “recycle [their] PS3 and get $100 of store credit towards the purchase of a new Xbox One.”

That Microsoft would directly go to users and offer store credit for PS3 trade ins is certainly a new development in the now decade and a half-long battle between it and Sony. The two have steadily been attempting to top each other’s messaging and offerings since announcing the now released Xbox One and PS4 last year. The war between the two has only gotten more intense since each console’s release this past November. 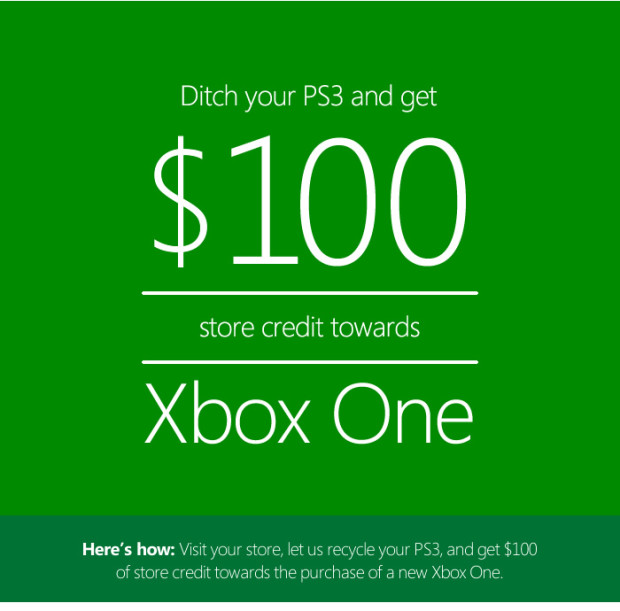 A screenshot of the email sent to a member of NeoGaf.

Ironically, this PS3 trade in offer isn’t clearly a good or a bad deal.

Recent sales of PS3 consoles on eBay, an online marketplace that connects sellers directly with buyers and then allows them to bid on items, recently wrapped up with PS3 consoles selling for around $125. If users are already planning to sell their PS3 certainly trading it in for $100 and not having to go through the hassle of finding a buyer online or on Craigslist is a good thing. Historically, users have shown that their willing to part with their last generation gaming console at a reasonable price — as long as they don’t have to do the dirty work involved in finding someone to purchase it.

It’s also worth noting that Microsoft’s PS3 trade in deal is better than what Best Buy is currently offering users. Users who trade in a slim PS3 with 120GB of storage will only receive $75 in store credit if it’s in “good” condition.

Of course, the difference here is that Microsoft is forcing users to take that credit and spend it for an Xbox One. So far the deal hasn’t surfaced on the Microsoft Store’s website. As such, users who received the email should contact the nearest Microsoft Store for more information. Details posted with the email announcing the PS3 trade in deal do confirm that the console needs to turn on to be eligible for trade-in.

The Xbox One currently sells for $499. As such, users who take advantage of the PS3 trade in deal will still need to pay $399 for just the console itself.