A hundred or so very lucky users will receive their Xbox One two weeks before the console is set to actually go on sale.

A few users who placed pre-orders for the standard edition Xbox One console with Target began receiving their shipments on Friday. While it seems many users kept the early arrival to themselves, one enterprising college student with the Twitter handle Moonlightswami took to YouTube to fully detail his unboxing experience and give users a look at the Xbox One Dashboard software. A video and screenshots posted to Twitter also detailed the download sizes for all the Xbox One’s digital titles.

Unfortunately, Microsoft worked to get the YouTube video pulled over the weekend. Then followed that up by placing a ban on Moonlightswami’s Xbox One. In a statement posted to the MajorNelson  blog, Microsoft confirmed that it’d banned the console saying, “given we are still putting the finishing touches on our games, UI and online services, as well as confidential partner and media agreements, these consoles units will be restricted from connecting to Xbox Live until closer to our launch date.” Microsoft also confirmed that “a very small” amount of Xbox Ones shipped early, however it didn’t elaborate on which partner made the mistake and how it happened. Target later owned up to the mistake 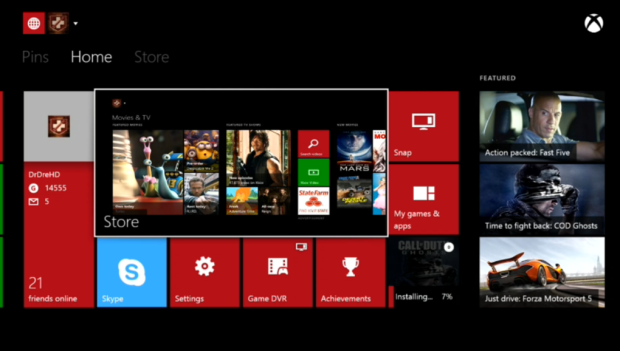 Screenshots of the Xbox One Dashboard captured by Moonlightswami

In a statement to Kotaku, Target confirmed that it was responsible for the issue and elaborated on what exactly happened saying, “Due to a systems error, Target shipped a small number of video game consoles prior to the street date.”

Moonlightswami has confirmed that the ban Microsoft placed on his console is only temporary and that the company has assured him it will remove the ban on the leaked console and his YouTube videos will be lifted shortly before launch. As console bans only keep a user from accessing Xbox LIVE, he can still enjoy single player experiences that don’t connect to Microsoft’s servers. That includes the copy of Call of Duty: Ghosts that was sold to him by a local GameStop.

For its part, Shuhei Yoshida, President of Worldwide Studios at Sony Computer Entertainment, confirmed that the company wouldn’t ban PlayStation 4 users if they were to end up in a similar situation.