After just announcing a slew of new software upgrades at this week’s Gamescom 2014 trade show in Germany, Microsoft is already updating the consoles of users who joined its Xbox One Update Preview Program with new features and extras.

Microsoft started deploying the new update to some Xbox One users late last night, and with it comes many of the social and media changes that it shared during its Gamescom 2014 Xbox Media Briefing, according to Xbox Wire.

Following the update, users will find that the Parties app has received makeover. With this new Party app Xbox One owners playing together in a group will be able to choose a leader and let them make all the necessary changes like sending invitations and booting people from the party if they aren’t being as friendly as they should be. This new Party app has also been reorganized so that it’s easier to do tasks like silencing someone whose mic is picking up too much background noise and more. 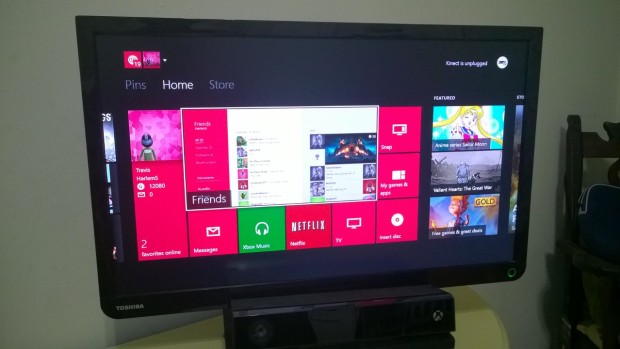 The Party app definitely needed some help, but the first thing users are going to notice in this update is the new Friends area on their Xbox One’s home screen. Last month, Microsoft began rolling out a new Friends area that allows users to see who is online and check leaderboards without having to deep dive into the Xbox One’s Friends app. Microsoft isn’t  rolling out the new up-front Friends area to every member of the Xbox One Preview Program just yet, but more users should find it available on their consoles.

There are some large media changes coming to Xbox One users too. Microsoft is adding a new digital Media Player app to supplement the options that are already available through the Xbox Music and Xbox Video apps on the Xbox One. Initially, users will be able to load different types of media onto a flash drive from a laptop, desktop or tablet and watch it on their console. That’s big since today, getting your own media onto the Xbox One requires a network and a Windows PC that supports Microsoft’s own Play To media streaming. Sometime down the road Microsoft plans to add support for streaming music and video directly to the Xbox One with DLNA technology. It’s just not there today.

Internationally, these update should provide support for streaming live television to the Xbox One’s SmartGlass apps, but that entirely depends on the Xbox One Digital TV Tuner, which isn’t available on store shelves just yet.

Dozens of small but good to have fixes fill this latest Xbox One update too. Xbox One’s SmartGlass app has picked up the ability to comment and interact with the Activity Feed that Microsoft added to the app in a previous update. Game clips can be commented on and shared too. The threaded messages that Microsoft showed off for the Xbox One itself, are available in the SmartGlass app, making reading messages and having conversations over Xbox Live simpler.

“Xbox on,” the command that allows users to turn on their Xbox One without a controller if they have a Kinect 2 senso,r has been added for Australia, Canada, Italy, Spain, Mexico and Brazil. A few settings have been moved around, and a new Bandwidth Usage meter now lets users track how much bandwidth their Xbox One has consumed in the past month or so. That’s great for Xbox One owners who find themselves routinely being admonished by their cable provider for consuming to much data.

Xbox One owners participating in the Xbox One Update Preview Program should head to their console’s Settings and check for the new update. If they have the console’s low-power mode turned on than the update will download and apply itself when ready.

This new Xbox One update should roll out to all Xbox One users sometime next month if Microsoft stays true to form.