The biggest question in gaming is still “Xbox One vs PS4, which one is better?” We’ll try to answer that question by talking about seven key areas where shoppers need to compare the two consoles and Xbox One and PS4 deals that you can count on through the rest of 2014.

Both of these consoles are just over a year old and now offer a large library of games making them more attractive than last year, plus there are a lot of deals that include several games and better prices than in 2013.

For many users, this is the year they plan to buy a new console or to ask for one for Christmas. It is no longer hard to find an Xbox One or PS4 in stock and with the deals and bigger variety of games at cheaper prices. There are even subscription services that let you digitally rent a game or play full games for a small monthly or annual fee.

Check out our Xbox One vs PS4 comparison to make your decision.

Here’s a closer look at how these two new consoles compare from someone who owns the PS4 and the Xbox One and plays both weekly. The good news is that both consoles offer most of the same games with some special bonuses that are limited to the one console or the other. There are still exclusives like The Last of Us Remastered and Halo: The Master Chief Collection, but overall you can play most of the best new games on both consoles.

Xbox One vs PS4 Price & Deals

The Xbox One and PS4 prices are closer than last year. Originally the Xbox One price arrived at $499 with Kinect, but now there is a Xbox One without Kinect that starts at $399 before any deals. For the rest of 2014 Microsoft cut the price of the Xbox One $50 leaving us with the following prices.

Sony is not cutting the price of the PS4, which works out for most consumers considering it was already $100 cheaper than the initial Xbox One. We are seeing new Black Friday deals and bundles that add values to both of these consoles increasing the value.

Count on an extra $60 for a second controller and $30 to get a stereo headset adapter for the Xbox One if you wan to play with a headset. You should also budget at least $20 for an older game and $60 for a new game on both consoles. At this point you should look at bundles that include a free digital game.

For Black Friday you can find a PS4 deal that includes GTA 5 and The Last of Us Remastered for $399. There are Xbox One deals dropping the console to $329 and including a $30 gift card and Halo: The Master Chief Collection.

There are some exclusive’s but overall the top games arrive on both consoles.

All of the top games come out on both the Xbox One and PS4. This includes Call of Duty: Advanced Warfare, Assassin’s Creed Unity and many others like the GTA 5 re-release.

If there are specific games you want to play, you should double-check that it is available on the PS4 or Xbox One before you buy. There are some important titles only available on select consoles.

Baseball fans will certainly want to go with the PS4 to get MLB the Show, which is not on the Xbox One and really is the only baseball simulator worth playing. The PS4 also offers The Last of Us Remastered, a wonderful survival game that you can only play on PlayStation. There are others like Killzone, Let it Die, Infamous First Light and DriveClub, so check these out before you buy.

On the Xbox One, you get access to Halo 5, Halo The Master Chief Collection, Sunset Overdrive, Scalebound, Fable Legends, Crackdown 3, Forza Horizon 2, and others.

Though there aren’t many, you’ll want to figure out what games matter to you most or check with the person you’re buying this for as a gift.

There are many features that the consoles share, and that help set them apart. Here’s a fast look at some of the most important features on the Xbox One and PS4.

PS Share – You can share a game from the PS4, allowing a friend to play or watch you play even if they don’t own the game. Unfortunately developers can turn this option off.

Digital Games – You can buy games digitally on PS4 and Xbox One and the release times are finally most often tied to midnight on the east coast and you can pre-load the game before the release.

Kinect vs PS4 Camera – These two devices allow for voice control and interactive control over some games. Overall the Kinect is a better value, but some of the cheaper Xbox One consoles do not include it.

PS Now – You can rent games digitally on the PS4, but the rates are not that great.

Use the Xbox One to control your HDTV.

TV – There is a HDMI connection on the back of the Xbox 360 that lets you connect your HDTV service to it and then watch TV using your Xbox One as a guide and controller.

Apps – We finally have HBO Go on the Xbox One, but it is still missing on the PS4. Check out the PS4 apps and the Xbox One apps to make sure your services are available. 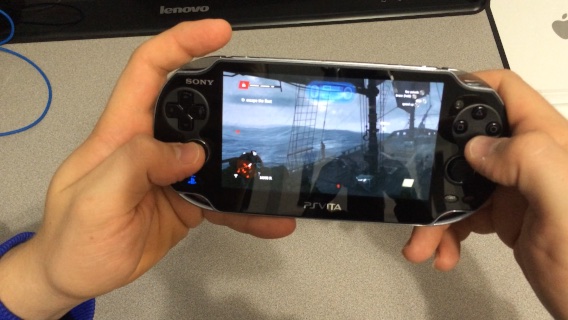 Play PS4 games on your PS Vita or select phones.

PS4 Remote Play – You can use the PS Vita or some Android phones to remote play PS4 games on a mobile device. This sometimes includes support for the PS4 controller.

Both controllers are better than last gen, but the PS4 is slightly better out of the box.

The new PS4 controller is vastly better than the PS3 controller, so don’t stick to the Xbox just because you never like the old PlayStation controllers.

The Xbox One controller is an improvement from the Xbox 360, but you still need a special adapter to use headphones with it. There is no fast share option, but if you have a Kinect you can use audio commands to record game video, but there is no easy option to share it to social media.

You can play games online on both consoles with PS Plus or Xbox Live Gold. PS Plus is $49.99 for a year and Xbox Live is $59.99 or a year. You need these to use the consoles to the fullest. Both consoles are suffering some downtime recently, but the Xbox Live experience is dramatically worse than a year ago.

There are evenings where we’ve wasted over an hour trying to join a single game with a friend on the Xbox One. This is worse when new games arrive with Xbox Live falling apart almost every Tuesday in November and staying in shambles for days. The PS4 is not without problems, but the experience feels better than on the Xbox One throughout the last three months. You no longer need Xbox Live Gold to stream Netflix.

There are bonuses with each service, including free play weekends for some games on the Xbox One and discounts of 10-50% off digital downloads of recent games. Gamers can also enjoy some free arcade-style or indie games.

On PS Plus there are similar offers including free indie games and it works across the PS3 and PS Vita as well as on your PS4. This membership also includes 3GB of online game saves.

Both consoles are not immune to problems. Common Xbox One problems include the Kinect not responding, slow game installations and downloads and other odd behavior, Unplugging the Xbox One for five minutes is enough to fix some of these issues.

The PS4 recently tried to keep ejecting a disc and for a while it would randomly lock up, but recent software updates fixed the locking issue.

Controllers for both consoles are not incredibly durable. Gotta Be Mobile editor Adam Mills replaced his Xbox One controller this month after it wore down from a year of use and there are reports of widespread R2 problems with the PS4 controller.

As we mentioned, both Xbox Live and PSN are experiencing more downtime than a year ago as the services struggle to meet demand for new games and as hackers test the services.

Which Should I Buy? PS4 or Xbox One?

Both of these consoles offer a lot to the user. Unless we meet up for coffee and listen to your exact use case it’s impossible to tell you which console you should buy.

But, you can use the comparison above to figure out which console delivers the best games and features for the way you play games. You should also check out which consoles your friends are buying or using. You cannot play against a PS4 player from the Xbox One, even if you both own the same game.

Related Topics:MicrosoftPS4SonyXbox OneXbox One vs PS4