The Xbox One is nearly impossible to find at retail or online after selling out the day it launched (Nov. 22). Xbox One pre-orders were even difficult t0 come by in the days and weeks leading up to  the XBox One release. As we noted earlier today, the only major retailer to have the XBox One in stock and ready for immediate delivery is GameStop, though that company is selling the XBox One as part of a $739.99 bundle that includes a trio of games that isn’t right for everyone.

The XBox One bundle Walmart is selling today includes the console itself and a choice of two other items. Buyers can opt for either two XBox One games or an extra controller and a single game. Unlike GameStop, Walmart is allowing XBox One buyers to choose from any of the 13 XBox One launch titles. 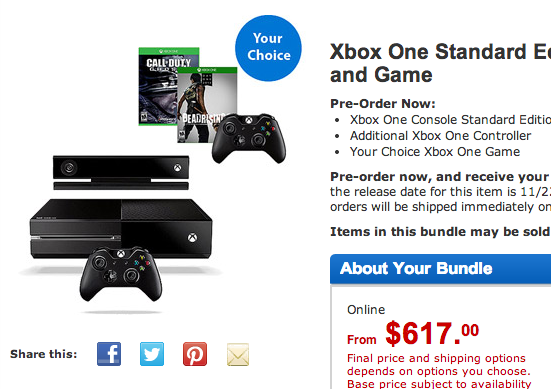 This XBox One bundle doesn’t offer any sort of discount for those opting for two games plus the console. In a weird twist, Walmart is actually overcharging customers by $10 that opt for a single game and an extra controller. That’s because the games sell for $59, while the controller retails for $49. We recommend opting for two games and worrying about the second controller later.

In a press release, a Walmart executive said he expects most of its customers that shopped in its stores on Black Friday to shop at Walmart.com on Cyber Monday.

“More than two-thirds of people who plan to shop in our stores on Black Friday also plan to shop Cyber Monday,” said Joel Anderson, president and CEO, Walmart.com U.S.