XCOM: Enemy Unknown Coming to iPad and iPhone This Year

This summer 2K Games will bring XCOM: Enemy Unknown, the most recent entry in the popular sci-fi tactics series, to the iPhone and iPad.

XCOM Lead developer Jake Solomon told Polygon the team at 2K China will port the entire AAA game to iOS devices. Gamers who play the game on the iPad and iPhone will play the same game that PC and console gamers received late last year. It seems probable that XCOM: Enemy Unknown on iOS devices won’t look as nice as it would on a high-end gaming PC, however.

As Solomon shows in a video demonstrating the game, XCOM should work very well on a touchscreen device. The game has players moving soldiers around a battlefield to hunt down aliens.The game is turn-based, and characters move on a grid like in other strategy RPGs like Final Fantasy Tactics and Nintendo’s Fire Emblem series.

With touch controls players can just tap on the spaces they want their soldiers to move to. Users can also change their view of the battlefield with simple gestures. The PC and console game works well with controllers, but the game’s menus and grid-based combat begged for touch controls, which iOS gamers will now get. 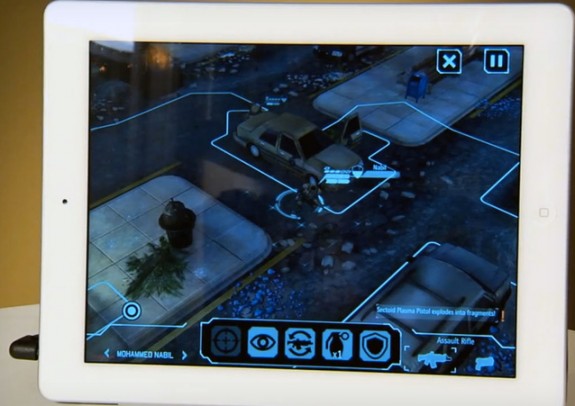 2K only showed the game running on an iPad, though it says the game will work on Apple’s smartphone as well. Gamers may want to play the game with the larger screen of the iPad however, if only so they can see more of each battle. If the game supports iCloud syncing, however, users with both and iPhone and iPad can play the same campaign on both devices and not have to choose one device over another.

There’s no word on an exact release date for XCOM: Enemy Unknown on iPhone and iPad, nor did 2K announce a price for the game. The company did say the game will be a “a premium-priced app,” however.