Searching for a point of interest in a car in dash system is about as useful as using an old-fashioned GPS unit with 3-year-old maps, but Chrysler has a solution for this problem.

The Uconnect in dash system includes Uconnect Access which in addition to letting users remote start the vehicle with their phone from anywhere the vehicle and the phone have service includes access to Yelp for point of interest searches.

This means if there is a business listing in Yelp, the user can search for it with their voice while driving using the on-screen and steering wheel controls and be sure they are getting the most accurate and latest information. The video below shows how the Uconnect Yelp service works.

It is really nice that it can find the most recent information about points of interest in a specific area, and provide the rating information that many users will want before picking a restaurant in an unknown area. 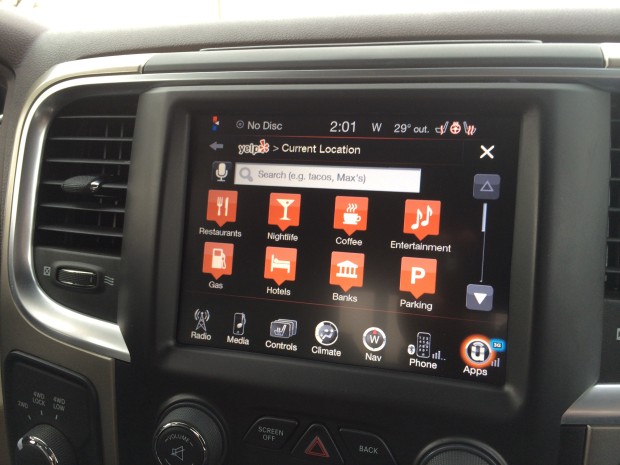 The system shows the hours, the reviews, price range and phone number for a point of interest and allows users to call or get directions with a tap on the in dash touchscreen. The service is  integrated so calls will go over the car’s speakers and the go here will use the built-in Uconnect map service.

From a usability standpoint this is a very nice way to keep the ned user up to date with the right information. For comparison, the MyFord Touch system in the 2013 Ford Fusion often has trouble identifying some points of interest, such as an Apple Store in Ann Arbor. With Yelp integration the Chrysler Uconnect system can essentially find any place a smartphone can.

While we know Yelp best for restaurants and bars, the service also includes Gas stations, mechanics, drugstores, shopping, hotels and many other categories that are handy while on the road.

In addition to using voice to control the Yelp search, the system offers voice input for directions and a voice to text service that use the  vehicle’s built-in 3G connection to perform the conversion from speech to text in the cloud. The 3G connection can also turn the Ram 3500 into a hotspot on wheels. 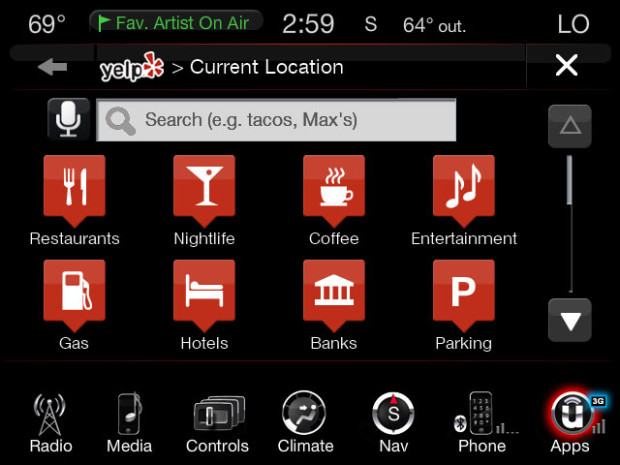 Here’s a closer look at the Uconnect system with Yelp.

We take a closer look at the Uconnect system in the 2014 Ram 2500 at AutoGeeks where we look at the other features of the system and a better look at how the Ram 2500 uses two cameras to simplify hooking up a trailer to a fifth wheel hitch.