The mobile revolution and human evolution came full circle today, with Google’s announcement that its search algorithms would now rank content that contains one word and one picture higher than it would more wordy posts. Google’s announcement puts the punctuation on one of the fastest adoptions of social change ever recorded in human history that followed the adoption of the mobile App: Yo. The news follows an announcement from the developer of Yo that it would soon be releasing a Yo smartphone that featured only the signature App and a camera. 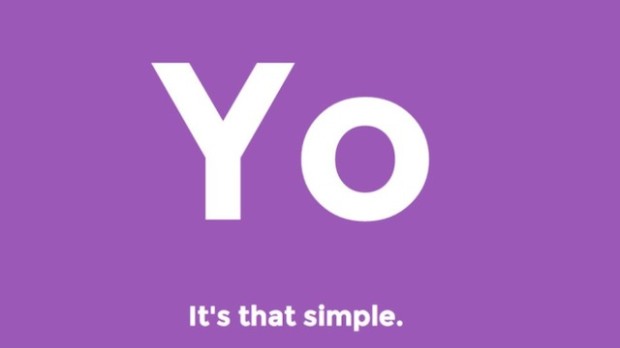 Yo began its unprecedented impact on human society in April 2014 as an App that featured a simple way of human communication. By tapping the one button in the App a user could send a simple message, “Yo” to another user. After suffering a hack by college students one month after launch, Yo quickly righted itself. While initially derided and scorned by many, the developer of Yo seemed to have uncannily tapped into the trend in human nature and mobile computing that saw the desire to simplify the act of communication. Saying that context was all that was needed to make the single word “Yo” work in any circumstance, the developer was proved right as more and more mobile device users led what became a stampede away from complex communication methods and structures to a more simpler way of human expression.

“Yo, simply put, took us back to our simple roots as humans when one syllable utterances were all we need to communicate our thoughts and feelings within any context. Complex languages followed when humans mistakenly thought they needed more thorough human communication structures. And sadly, while most humans adopted these new, and often confusing languages, languages became a way for humans who could master the complexities of any language to control other humans who were less skilled. Languages became borders. Languages became the provence of the elite. Once methods for writing and then printing led to the necessity of learning to read in order to survive in an evolving world, the human race began what looked like a journey to enlightenment. But sadly, as we now know, those methods devolved into a misuse and abuse of language that obscured the real intent behind most communication. We’ve been heading to this in so many parts of our culture for decades now.”

“With Yo, the borders created by language have been erased and human understanding has actually increased, erasing many of the roots of the world’s problems. Though it has lead to economic and political disruption, even in those circumstances Yo is proving that less is more, once humans strip away the unnatural language barriers and begin solving those issues.”

Google’s announcement of its search algorithm change was met with a chorus of “Yo’s” from many watchers. According to Google CEO Larry Page:

“Yo proved we were right all along with Google Glass. All we need to communicate with each other is one word and a picture to provide context. While we resisted Yo when it first came on the scene as a threat to our advertising business, we quickly realized that Yo could could help us help consumers do away with the manipulation of language structures and deception that the advertising business is built on, to deliver more relevant results. When we abandoned AdWords and began adopting a Yo-friendly method of advertising our revenue went up dramatically. We’re only sorry that we abandoned Google Glass after its rocky introduction but are pleased to say that after re-engaging production we can’t keep up with demand as consumers realize that simply snapping a picture and saying ‘Yo’ allows them to become the advertisers of tomorrow.”

The creators of Yo were unable to trademark, copyright, patent, or otherwise protect the word “Yo,” but that led to an even quicker adoption of the word and concept behind it without those usual legal restrictions.

Po is correct about the economic disruption brought about by Yo. Industries that include journalism, online publishing, advertising, entertainment, telecommunications, and academia have all suffered a drastic reshuffling in the wake of Yo. Some have seen impressive new gains, while some have practically ceased to exist.

Print journalism, already in decline, has ceased to exist. With users receiving their news from online sources that include a picture and the word “Yo,” easily and quickly explaining most events or topics, those who clung to their daily newspapers became such a minority that the industry became no longer viable.

Online publishing, while initially flourishing with the advent of Yo, has also suffered as it became difficult for advertisers to compete with the thousands of Yo streams from everyday humans. Advertising agencies have essentially ceased to exist.

The entertainment industry has tossed thousands of writers, performers, and technicians out of work with a return to an age that almost resembles the silent film industry of long ago. Images accompanied by the word “Yo” became the most lucrative film and television viewing experiences ever. Although companies like Netflix that feature older movies and TV series saw a boost in users who preferred what many are calling “Talkies,” in a nod to the past.

Sports programming has seen an increase in viewership now that announcers can only say “Yo” after allowing viewers to watch game play uninterrupted.

Universities and colleges the world over have begun downsizing and going out of business following trends that see job markets requiring less educated workers. Although academic institutions that specialize in some professions that still require the use of complicated language structures (legal, medical, etc..) see slower declines in enrollment.

The telecommunications industry has changed drastically. Trends in less phone calling and more text based messaging accelerated quickly. Consumers did not require smartphones that featured radios for voice calls once Yo began being adopted in large numbers by mobile users. This led to lower cost devices, the ending of subsidized pricing in the U.S. and declining revenues. With the Federal Communications Commission turning cellular and cable based broadband carriers into public utilities, familiar mobile giants like AT&T and Verizon quickly changed their business models.

Social network services such as Twitter and Facebook that were already on the decline saw some initial hope by following Yo’s trends. Twitter tightened its 140 character limit, only accepting posts with two characters and a picture. Facebook floundered as its users left to cleaner and leaner services that didn’t include so many online games featuring the word “Yo.” When Facebook partnered with Yo, turning the Like button into a Yo button, customers initially responded positively, but quickly found simpler solutions that didn’t involve such difficult methods of setting privacy controls. Meanwhile geo-location services that featured check-ins thrived as all that was required was a “Yo” attached to any location based check-in.

The mobile and computing industries continue to suffer, searching for a way to stay relevant. Microsoft has discontinued its once vaunted Microsoft Office suite. Smartphone and computer makers no longer include full keyboards, virtual or otherwise on their devices. Apple, though hampered, continues to succeed through its music business, with outgoing CEO Tim Cook claiming that the move to acquire Beats audio was prescient, as customers only cared about the music with lyric content becoming increasingly irrelevant with most music now accompanied by video or pictures.

Yo’s move to create its own simplified smartphone comes just months after news that Amazon’s Fire Phone outpaced all other mobile device makers. With its multiple front facing cameras along with multiple rear facing cameras recording constant audio and video of what a consumer was seeing or listening to, Amazon had simplified the interface with a one button “Yo” on the side of the phone. Pressing that button once recommended the product. Pressing it twice purchased the product and had it delivered.

“We used to think a picture was worth a thousand words. Now, we know that a picture accompanied with one word tells us more than we could ever want to know.”

When asked about the new smartphone initiative and its implications going forward the creators of Yo replied,