The Yoobao Executive Genuine Leather Case V2 for iPad 2 is easily the best iPad 2 case I’ve seen yet. It is a nice low-profile leather folio style case that protects the iPad 2, feels good in your hands and incorporates the magnetic on/off sleep feature that Apple included in their Smart Cover.

Unlike the Smart Cover, this case covers your iPad on all sides and the sum of the parts combine to make this case a winner. I had to really look hard for something to put on the con side of my pros/cons list. 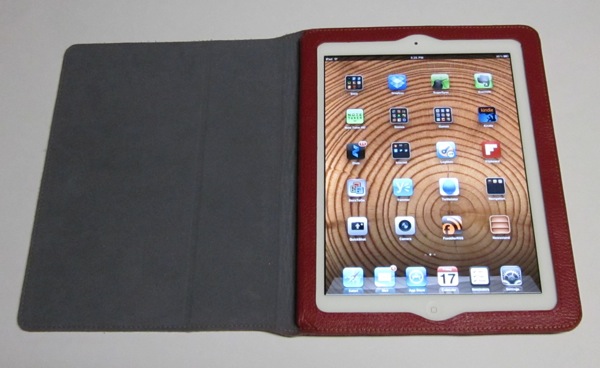 The genuine leather feels nice in your hands. It reminds me of a high-quality soft leather basketballs that even small-handed people can grip with only one hand. That means this case is not only comfortable to hold, but has a nice soft grip that won’t easily slip out of your hands as you carry it around. 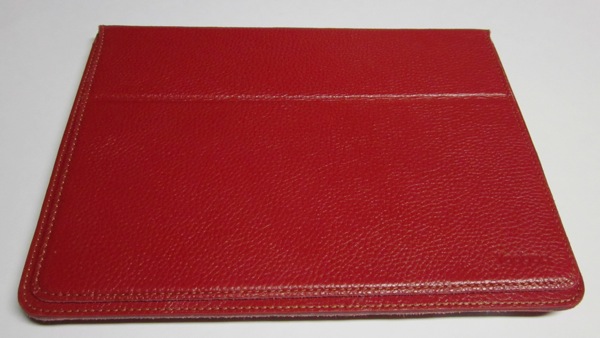 Three colors are available – black, red, brown. I was given a red case to review and while I don’t normally like bright colors on cases like these, preferring professional subdued colors, I really like the combination of the white iPad 2 and the red case. 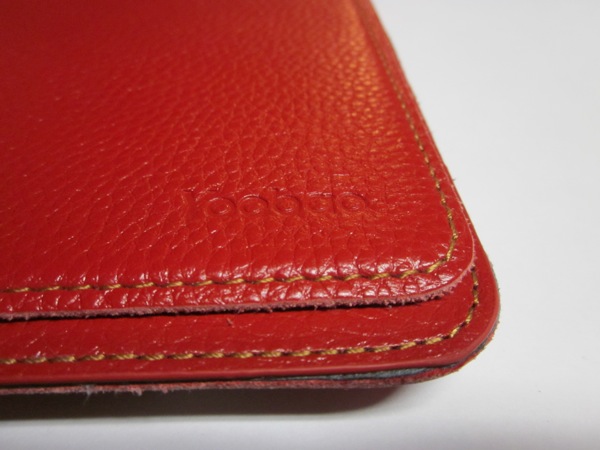 The case is tight around my iPad 2. The device doesn’t slide in and out easily, which is only a problem if you want to remove it a lot. I consider this a good thing. In some iPad cases that I’ve used the iPad slides around a bit. There is a flap that folds over the long edge of the case so that every side and corner of the case is covered and protected. 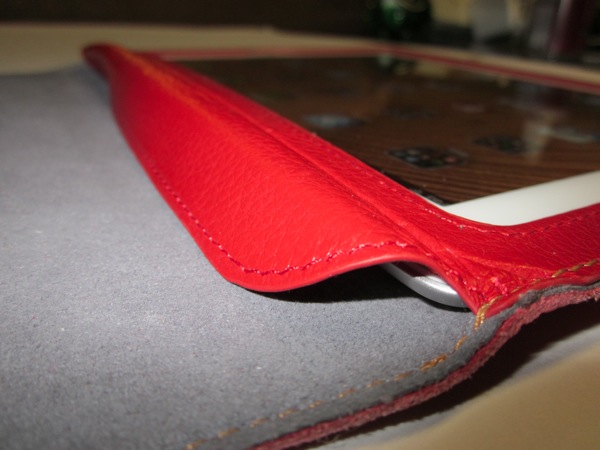 The leather is thin and hugs the iPad 2 so that it doesn’t add very much bulk or weight to the case. The case only adds 6.3 oz. to the iPad 2. It is not so thin that it won’t protect against bumps and dings. I wouldn’t trust it for drops from high places, but it is not designed as a rugged case. I dropped the iPad a few feet and the case did its job. 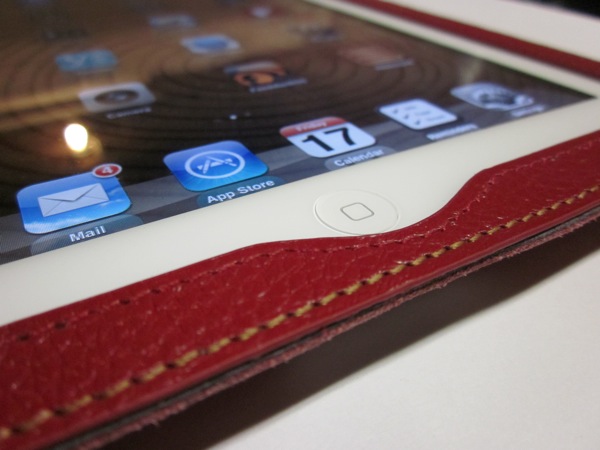 The folio cover protects the screen of the iPad 2 and puts the iPad 2 to sleep just like Apple’s Smart Cover. The magnets in the cover flap are not as strong as those on the Apple Smart Cover which causes it to occasionally allow the screen to turn on when the flap is covering the screen. This doesn’t happen a lot but I was concerned about the battery draining too fast, so I made sure that I set my iPad 2 to turn off after a few minutes just in case the flap was not engaging the sleep function when I wanted it to, like when it was in my computer bag. If I have to pick between having the back of my iPad 2 unprotected and having a cover that keeps the screen turned off 100% of the time when the flap is covering it, then I’d pick having the back protected. The issue of slipping magnets has also been reported on with the SmartCover, so it’s not unique to this case. 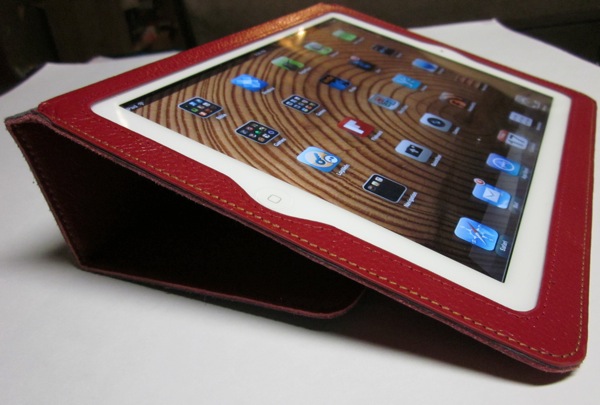 The case also has a stand feature which you use by slipping the front cover into a small flap on the back of the case. This gives you a nice typing angle or will hold up the iPad for video viewing or showing off pictures to friends.

As you would expect, all the ports, buttons and the cameras are accessible. When you hold the cover over the back it does cover the back camera making it necessary to hold the iPad 2 in an awkward way to get pictures from the camera. I haven’t seen a folio style case that has a cutout for the camera in the cover so that the camera is not covered when the folio case cover is folded over the back. 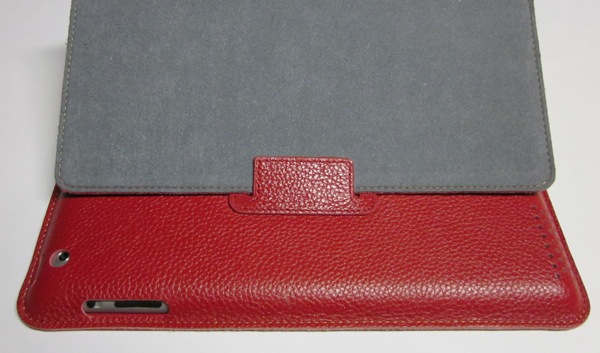 The Yoobao Executive Genuine Leather Case V2 for iPad 2 is a great product made of very nice soft leather. As I said above it feels great in the hand and the stitching is nice and tight. I’ve been carrying it around for a few weeks now and it hasn’t show any signs of wear. That is not enough time to really gauge how much it will wear over a year, but I mention it because some of the cases that I’ve reviewed do show signs of wear in that short a time. 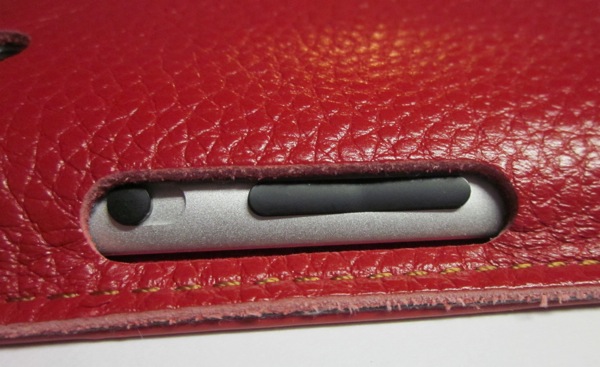 Fine attention to detail is noticeable. Some cases will have openings for the ports and buttons but they will be slightly misaligned so that it is hard to access them. The only problem I’ve had with the Yoobao case is the leather around the dock connector makes it a little bit hard to connect. The iPad 2 has a problem making it hard to connect the dock connector with or without any case, but the leather on one side and the front is a little too close to the connector. I had to push it aside to connect. However, the other ports and buttons are easily accessible. 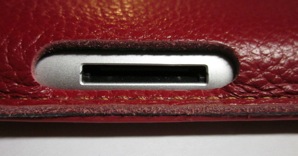 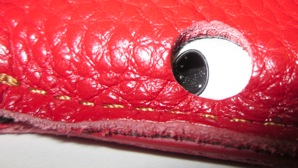 The case’s stand feature which holds the iPad 2 upright for viewing movies or showing off pictures to a friend is not as stable as it should be. Since I seldom use my iPad this way, I consider this a minor flaw. I think this is a result of the softness of the leather, which adds to the feel and grip while holding the iPad in the case. This is another tradeoff that I am willing to make for a softer feel and better grip.

The angle and stability of the iPad 2 when it is in typing mode is great and offers no problems at all. 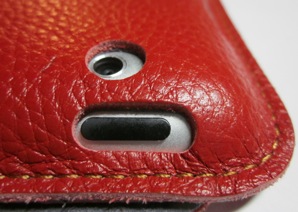 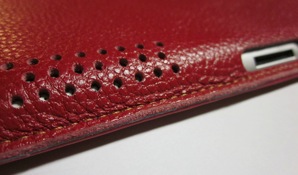 The Yoobao is easily the nicest case I’ve tested for the the iPad 2. Last year I couldn’t find a case better than the one from Scosche for the original iPad. This year Yoobao unseats Schoshe easily on the iPad 2. For a case of this quality that looks and feels this good, you would expect to pay $50-$70. Fortunatley, the case will only set you back $39.99 at their official distributor xenGadget. That is a bargain compared to other iPad 2 cases of this quality. Don’t consider buying this one if you don’t like folio cases. However, if you are like me and prefer this style, stop what you are doing and go buy it right now because it is easily the best iPad 2 case I’ve seen yet.