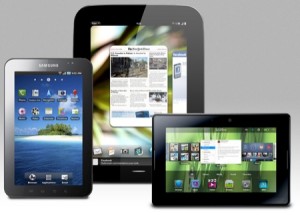 Om Malik of the eponymous GigaOM put into words a topic that’s been on my mind recently. Actually, it’s been on my mind since last year, but it continues to linger as companies rush to show off their iPad competitors, only to schedule their actual launches around Apple’s agenda. That, beyond all other factors, is why they won’t beat the iPad.

In his post, “You — Not Your Competitors — Define Your Destiny“, Om lays out a simple insight: if you follow your competitor’s rules, you probably won’t win. As an example, he points to the current tablet wars.

Let’s take this year’s big news: tablets, or rather, rivals of Apple’s iPad. HP announced its WebOS-based TouchPad. Motorola announced Xoom, which is powered by Google’s Honeycomb tablet-oriented Android OS. There are scores of others that have been announced and/or are waiting in the wings. They all have one thing in common: They are desperately trying to be the iPad. HP couldn’t resist using “pad” in the name. Others may not have the name, but are essentially trying to beat iPad on what was known in the PC world as “feeds and speeds.”

This is more true for some than others. While I think building on the basic iPad design was a good approach, it clearly pegs the HP TouchPad as an iPad wannabe. Less so for the Motorola Xoom and other tablets running Android 3.0, but as we look at the convoluted launch of the Xoom, it becomes apparent that even if they’re not trying to be the iPad, they’re still playing by Apple’s rules.

At last year’s CES, we saw a dozen vendors showing off a dozen tablets, including the infamous HP Slate on stage with Steve Ballmer. It was enough for many to declare 2010 the Year of the Tablet. Yet, I left the show with the distinct impression that everyone was going to wait and see how the Apple tablet rumors pan out. Aside from small independents, that’s pretty much what the big boys did. Maddeningly, the coverage of this year’s CES showed much of the same.

Big companies are breaking out with their own events, but doing little to improve the situation. Launch dates remain vague. Prices cannot be nailed down. Reporters aren’t allowed to touch the debuting product. Why? Because they’re rushing in to show up the current iPad, then holding back in fear of the next one, which is baffling since there’s no profit margin on products that are shown but not sold.

The BlackBerry Playbook is possibly the best (meaning worst) example of this. RIM debuted the Playbook months ago, yet we still have no definitive info on price and availability, nor has it been made available to anyone for a full hands-on review. The Playbook might beat the current iPad in several respects, but those points are completely irrelevant if you can’t get one.

On the other end of the spectrum, the Motorola Xoom is actually hitting the market promptly, but it’s doing so with what I and others wonder is a rush job. Reviewers are already talking about updates for Android 3.0 and regretting the inadequate timeframe for developers to provide tablet-optimized apps. Despite claims of Flash support, the Xoom will ship without it with Adobe Flash 10.2 being made available later. A promised 4G upgrade will not be available for months and then will require shipping it out for a week. I don’t see any reason to launch the Xoom in this state, unnecessarily risking unsatisfactory early user experiences, except to shove it out before the next iPad.

Whether they’re waiting to see what Apple does next or rushing a seemingly unfinished product to market ahead of it, both approaches are wrong because they’re built around a competitor’s schedule. To paraphrase Om, you can’t be a leader if someone else is setting your agenda. These are good companies with good products, but they should be chasing greatness, not chasing the iPad.