With iOS 7 beta 5 your iPhone knows where you live, your favorite restaurants and even when you get to work late — and it’s awesome.

iPhone location tracking isn’t new, and it’s something users agree to when setting up the iPhone, but it can be a surprise to see the nitty-gritty details of where you’ve been.

With the upcoming iOS 7 release Apple is leveraging location information to help users know when to leave to get to work on time and to deliver other personalized location information. Apple also allows users to opt in to improving Apple Maps by linking up their home address with locations on a map.

Apple came under fire in 2011 for storing information about your location, but now that iOS 7 can deliver useful information like how long it takes to drive home or to work, consumers may be more open to the idea.

When Google started correlating searches and locations with Google Now in late 2012, pundits called the service creepy, which is certainly how some users may feel about the IOS 7 frequent locations feature, but if Apple leverages it right it’s going to be pretty awesome. 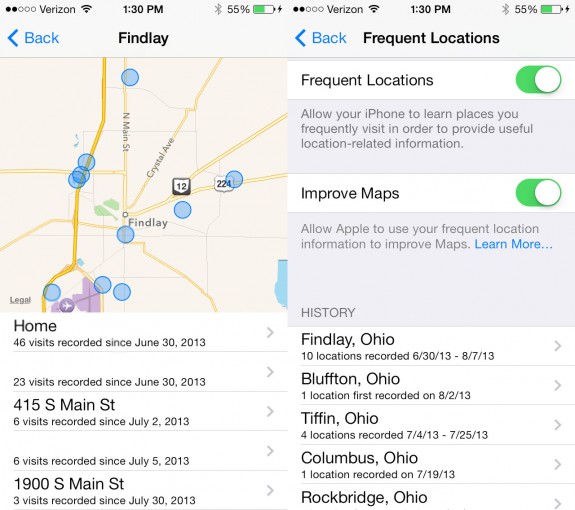 Take a look at your frequent locations in iOS 7 beta 5.

Here’s a quick look at what my iPhone knows about me, base on location information.

At this point, the iPhone shows locations, dates and times, but because Apple Maps isn’t up to date with the latest business information in many cases it can’t tell that I am at a coffee shop or a Mexican restaurant. If Apple could piece that together we could hear more talk about a creepy service but it could also help point me to similar places while I am traveling.

I already see information about how long it takes to drive to home and to my in-laws, and if I worked somewhere else IOS 7 would include that as well. I’m hoping we can see connections that Google Now delivers. The best use of Google Now personally was searching for a wedding reception location on an Android smartphone early in the day, and getting a pop up on my Nexus 7 with the location and directions 30 minutes before it started, even though I never entered a time on any devices or the location on the Nexus 7. 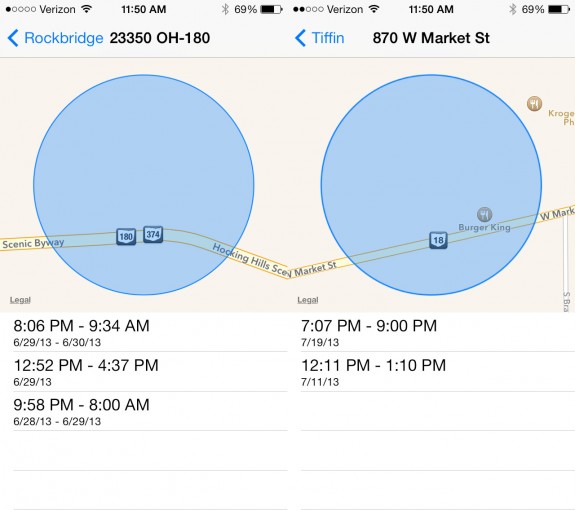 My iPhone knows where i was on vacation and where the Mexican restaurant we frequent is.

Hopefully Apple can correlate my home address with the fact that the latest version of Apple maps removes my street and runs an alley directly through my yard and a neighbor’s pool. Something they fixed last year after I submitted a correction.

Yes, some users may be concerned about the ability of someone who gets their phone to immediately see their schedule and home address, but that’s what a passcode lock is for. And it’s also easy to look at contacts or ask Siri for directions to home, even without this information stored in the Frequent Locations area of settings.

Keep in mind this is the iOS 7 beta 5 release, not a final version of iOS 7 so we could see this settings option disappear before the final version this fall. Even if the ability is there, expect an option to turn it off and limit location tracking.