It’s June. And those in the Northern Hemisphere are getting ready to officially greet summer this month. Some of those folks are hopeful that the excercising they’ve been doing has helped them shed winter weight and put them in trim for summer fun on the beach. Perhaps they’ve been monitoring progress on their mobile wearable devices. And maybe those mobile devices are contributing to less weight loss than they were hoping for.  A new study says our iPhones, iPads and other mobile devices might be making us fatter. Yep, you read that right. Your iPhone may be keeping you from being as trim as you want to be. 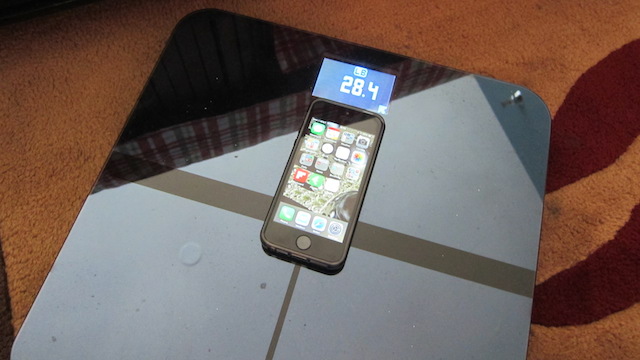 The study was published in the science journal Sleep, and presented on June 3 at Sleep 2014, the 28th annual meeting of the Associated Professional Sleep Societies. The study was conducted at Northwestern Univeristy in Evanston, Illinois. The focus is on how blue light emitted from smartphones can increase the risk of putting on unnecessary weight by affecting our metabolism.

According to the study, those who use devices before or after the evening meal saw their appetite and sleep affected. Those exposed to blue light experienced an increase in hunger that began 15 minutes after being exposed to the light and that hunger increase was still present almost two hours after the meal. Essentially the study is saying that blue light emissions can keep you feeling hungry even after completing a satisfying evening meal.

It was very interesting to observe that a single three-hour exposure to blue-enriched light in the evening acutely impacted hunger and glucose metabolism,” said study co-author Ivy Cheung, a doctoral candidate in the Interdepartmental Neuroscience program at Northwestern University in Chicago, Illinois. “These results are important because they suggest that manipulating environmental light exposure for humans may represent a novel approach of influencing food intake patterns and metabolism.

But don’t go looking for a smartphone or tablet that doesn’t emit some form of blue light just yet. While the study seems to have the proper academic credentials behind it, Ivy Cheung, a doctoral candidate in the Interdepartmental Neuroscience program at Northwestern University notes that more research is needed. Given that the study was performed over a 4 day period on only 10 students that would probably be a good assumption to make.

The study group comprised 10 healthy adults with regular sleep and eating schedules who received identical carbohydrate-rich isocaloric meals. They completed a four-day protocol under dim light conditions, which involved exposure to less than 20 lux during 16 hours awake and less than 3 lux during eight hours of sleep. On day three they were exposed to three hours of 260 lux, blue-enriched light starting 10.5 hours after waking up, and the effects were compared with dim light exposure on day two.

There have been other studies and warnings about mobile device use and weight gain in the past. Those earlier studies primarily focused on the fact that excessive daily mobile device usage can lead to a more sedentary lifestyle. Apparently even texting while walking slows you down enough to have an some sort of effect. That puts our mobile device lifestyle in competition with the couch potato cliché for television viewers.

Given the apparent fitness trends that have mobile device makers and App developers breathlessly chasing each other to offer health and fitness monitoring solutions, it will be interesting to see if any data from this blue light study has an impact. Perhaps we’ll see new smartphones advertised with “less blue-light emissions” as a selling point. Or a fitness tracking App that warns users that they should turn off their device at certain points during the day/evening to help control their metabolism. There’s some irony in there somewhere.