That sugar rush  you get when you eat sweet foods can also give your favorite gadgets a major power boost as well it turns out.

Researchers are Virginia Tech University are expecting that batteries made from sugary foods–including potatoes–will hit the market within three years. These batteries will not only be safer, more eco-friendly, but will also have the ability to offer tech consumers longer lasting smartphones and tablets. 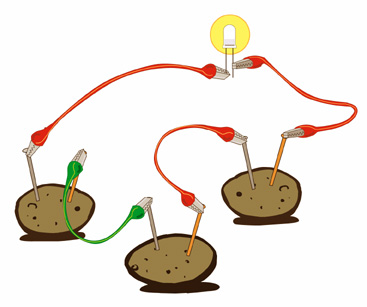 Image via University of Helsinki

These batteries have more power in more compact footprints than comparable lithium-ion batteries. Researchers say that the engineered bio-batteries derived from sugars store as much as ten times the amount of energy that’s in a similar sized battery found on the market today. Potentially, this means that either smartphones can be built thinner and smaller, or that with the same battery size that’s available today smartphones could last ten times as long. With 10 times as much juice, most users can probably go for as long as five days without needing to recharge.

The battery life longevity on a single charge as well as the compact size could also make bio-batteries a natural fit for wearable gadgets where there isn’t much footprint to attach a large battery to. Additionally, wearables need to stay on the body at all times, so this would mean that bio-batteries could satisfy the power requirements of all-the-time computing. One of the big complaints with Google Glass is that the wearable does not have long battery life, and this issue could be easily rectified with a bio-battery.

“Sugar is a perfect energy-storage compound in nature,” Virginia Tech professor Y H Percival Zhang said in an interview with The Guarian. “So it’s only logical that we try to harness this natural power in an environmentally friendly way to produce a battery.”

The way it works is that the batteries are broken down slowly through a step-by-step enzyme cascade, which releases electrons to be used as energy.

Additional benefits of bio-batteries include the fact that these batteries generate water as the primary byproduct, making it safe for the environment, and that they are biodegradable. Additionally, they don’t have the same high risk of explosion as with today’s chemically-based lithium battery packs.

These batteries could be ready within just three years, which will be good news for power hungry smartphone owners.