The update is an immense upgrade over the previous version of the YouTube application which supported the iPhone only and not even Apple’s latest iPhone, the new iPhone 5. Now though, those who may have been using some of the unofficial YouTube applications on their iPad or iPhone 5 will have the option of downloading the official application from Google. 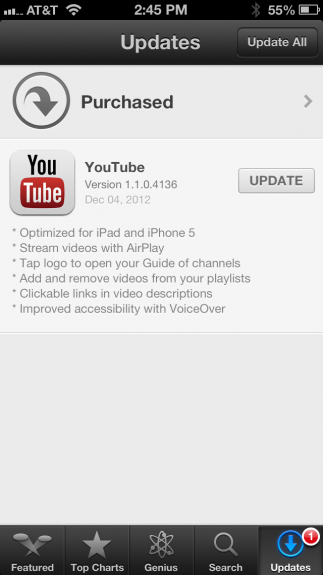 What’s more is that the update brings AirPlay streaming for videos, something that AppleTV owners have been hoping for for quite sometime. Google has also included an assortment of other upgrades including the ability to tap the logo in order to bring up a Guide of a user’s channels, an option to add and remove videos from Playlists, Clickable links in the descriptions of videos, and improved accessibility with the app’s VoiceOver feature.

All of these features are good additions to the application and should help to make the YouTube application one that iPhone 5 and iPad owners use on a daily basis. 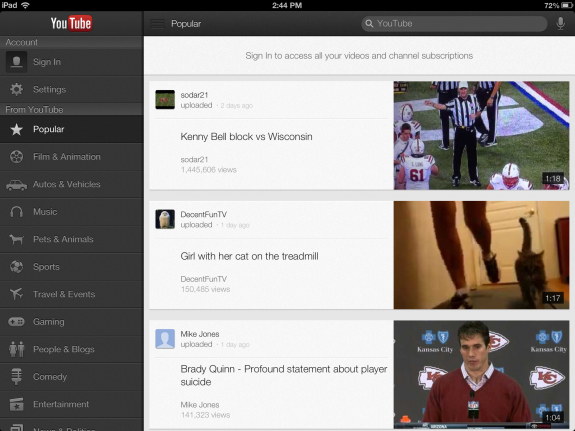 iPhone 5 owners weren’t able to take advantage of the device’s taller display. Now, videos will look much better on the iPhone 5’s display which offers 16:9 aspect ratio, up from 4:3. This update is also a long time coming for iPad owners as YouTube was taken away in iOS 6 and Google only released an official application for owners of the iPhone. Now though, the application is available in a format that will be familiar to iPad owners who used the YouTube application that was once stock with Apple’s iOS operating system.

The application is now available in Apple’s App Store and better yet, it’s available, along with all of its features both old and new, for free.