The newest version of YouTube for iPhone and iPad can send videos to smart TVs automatically with no pairing required.

The new YouTube app also lets users add videos to a playlist or queue so they can watch another video as soon as the first one is over. That makes it easy to plan a marathon of videos to watch on the TV. 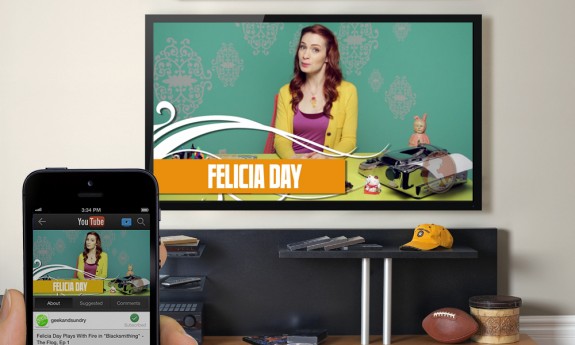 To use the new feature, users just have to tap the small TV icon next to the search icon at the top of the app. The icon turns blue when the video starts playing on the TV.

Because the app automatically pairs with smart TVs friends and family with smartphones and tablets can share each share their own videos on the TV. The only hassle to deal with is deciding who gets to play their video next.

The new update also lets users send videos to devices such as the PlayStation 3 and Xbox 360. Users have to manually sync those devices, however, which is more complicated than the smart TV integration.

While the app currently only supports TVs from a small number of manufacturers, later this year more companies will add the feature to their TVs. Later this year users with smart TVs and devices from Vizio, Phillips, Samsung, Sharp, Toshiba and Western Digital will gain similar simple integration.

The new apps sounds similar to YouTube’s new DIAL protocol which it and Netflix hope will compete against Apple’s AirPlay protocol. The idea of DIAL is to create one standard that multiple devices and platforms can use. If this is a form of DIAL it would mean that iOS apps can also support the standard.