While most of us have adjusted to software keyboards on our phones, serious productivity often counts on a hardware keyboard. ZAGG just released a new keyboard which helps iPad and Android owners get productive on the go.

The ZAGGkeys Solo is a bluetooth keyboard that works with your iPad, iPhone, Android tablet and Android smartphone. Instead of a dock connection to keep your device in place ZAGG has gone back to the old school days of a universal slot that props you device up for easy typing.

The ZAGGkeys Solo is available for $70 and in my opinion is a better deal than many device specific keyboards. Instead of buying all new accessories when you upgrade, you can bring along the old accessories. 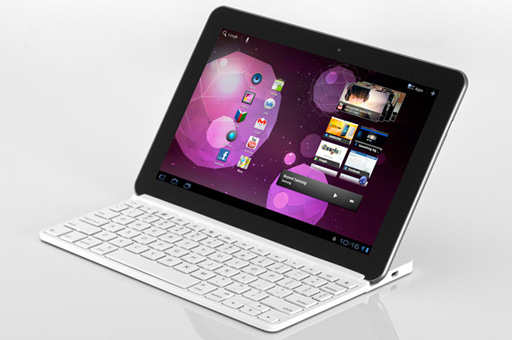 It’s also nice to be able to pair up and use your smartphone with the large keyboard. For short items, I’ll stick with my on-screen keyboard, but when it comes to knocking out the start of a post, it would be great to have the full screen visible while I write.

The ZAGGkeys Solo connects over Bluetooth, media playback keys, island style keyboard and comes in silver, black or white. The keyboard has a 510Mah battery and charges over microUSB.

The Solo is designed to work with the following devices, but should work with most Bluetooth Android and iOS devices. The only limiting factor would be the ability to set your device in the tray.

According to ZAGG, you won’t want this if you have a G-Slate, Acer Iconia or Toshiba Thrive. ZAGG also rates each device for landscape and portrait orientation on the product page.