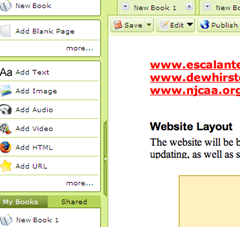 One of the most impressive tools I have used on Zoho is the Notebook. It totally knocks Google Notebook on its butt. Zoho Notebook is the closest I’ve seen a web app replicate OneNote, except of course for ink, OCR image searching, and Outlook integration.

Zoho Notebook has tremendous potential, especially if they had an IE plug-in that worked as seamlessly as Google’s and OneNote’s Send To feature. Without support for ink, I’m not sure I could make a total switch. In addition, I’d really like to have some type of offline-client so I can take notes offline and have them auto-sync back to the online Zoho Notebook. Having online access to all of my notes in a format very similar to OneNote is quite tempting, though. I wouldn’t be limited to a particular platform. I could use my Tablet PC or Mac to create / read / edit notes.  Using InkSeine for ink note-taking and Zoho for all the rest might be a good overall solution. I’ll definitely be using Notebook a lot more over the coming weeks.