In addition to the 7-inch HTC Flyer, which runs on Android 2.4 Gingerbread, HTC may soon be launching a 10-inch slate that will put it in the same league as the Motorola Xoom and the Samsung Galaxy Tab 10.1. A leaked document for a major U.S. retailer was obtained by PreCentral and reveals that the 10-inch Android 3.0 Honeycomb tablet from HTC is slated for a June launch, though pricing and additional details are not available. 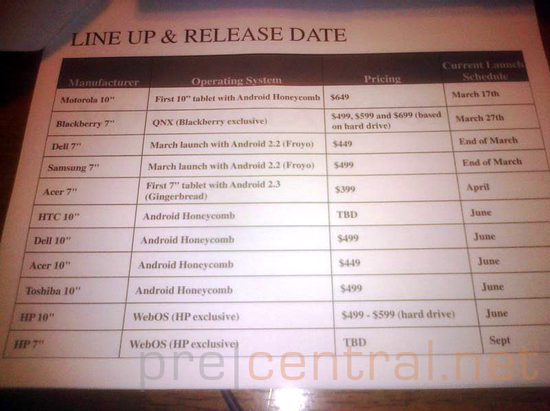 The 7-inch Gingerbread-powered Flyer is rumored to be coming to the U.S. market with 4G WiMax support by way of Sprint. The tablet’s unique selling point is its inking feature. It’s unclear if the leaked 10-inch slate will be coming in a WiFi-only unit or if it will gain support through a carrier when released. Also, it’s unknown if HTC will retain the digital stylus on the 10-inch tablet.