We had reported earlier that HTC had filed for a face unlock and biometric security for Android, features that Google had introduced to market on the Galaxy Nexus with Android 4.0 Ice Cream Sandwich and Motorola debuted with the fingerprint reader on the Atrix 4G early last year, and now it seems that Apple is joining the patent war with its own set of face unlock patent. Apple and HTC are no stranger to the courtrooms, having sued each other previously for patent infringement, and now with dialing face unlock patents, it’s unclear who will be the victor and who will be the first to break the peace and file for patent infringement as the feature will be coming to many more Android handsets in the future as Ice Cream Sandwich comes to more devices.

Like HTC’s patent and Samsung’s commercialized efforts with Android 4.0, Apple’s patent would use the front-facing camera to detect a face. However, Apple’s patent would go far beyond what Android offers currently. Like Android 4.0, it could recognize, detect, and unlock a phone based on facial recognition, but it could also enable a user’s personal settings to be also be accessed once the phone or mobile device gets unlocked. 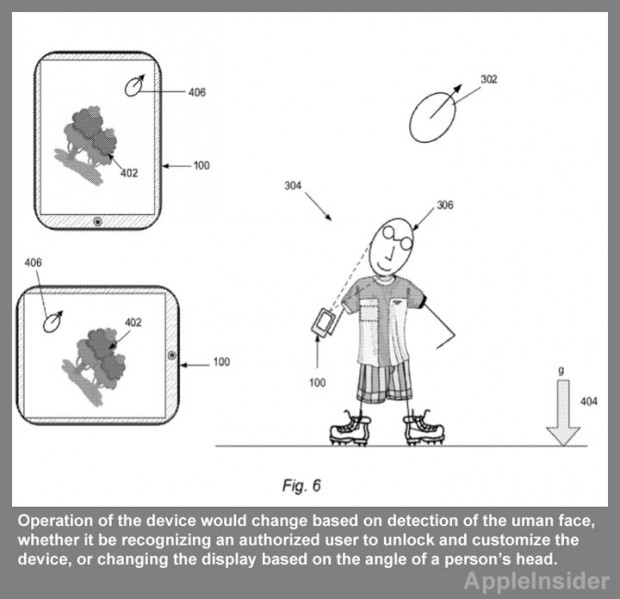 “If the detected human face is recognized… an operation of the (device) can be modified based upon the recognized human face,” the application reads. “The modification can include executing a pre-defined set of operations such as opening email, opening text messages, and so forth.”

This would be particularly useful with a tablet where various members of a family could share the device, and potentially even be expanded to Macs, Apple’s rumored HDTV project, and other devices where personalized settings are important and the hardware would come with a front-facing camera to detect a user’s face.

In the event that the face could not be recognized, the system would give users an alternate way to enter in a passcode to unlock the device, similar to Ice Cream Sandwich.