The good folks over at IGN have posted an absolute gem in the form of a leaked 2011 Verizon roadmap that shows the possible release dates for several of Big Red’s upcoming heavy hitters including the Motorola Droid Bionic, the HTC Vigor, the Samsung Stratosphere, and even the 4G LTE upgrade for the Motorola Xoom.

Of course, all of these dates are subject to change but at least we have some possible dates to look forward to. So, let’s break down what we think we might see from Verizon over the course of the next couple of months. 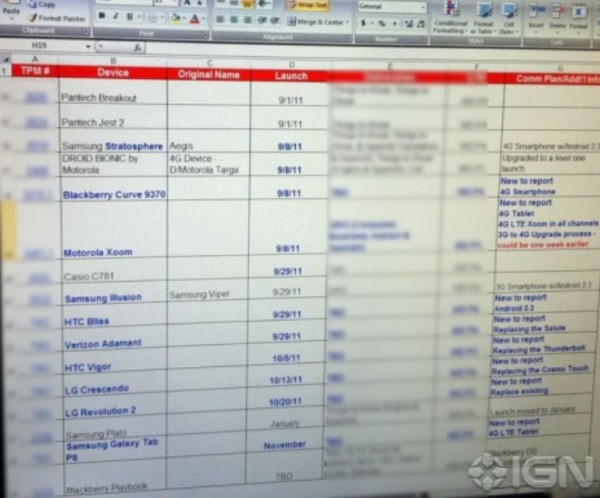 First and foremost, the leak puts the Droid Bionic and 4G LTE upgrade for the Motorola Xoom as September 8th. Remember, we had heard September for both of these and we also know that both are going to be launching at the same time. That makes September 8th a fairly credible date. It’s also a Thursday and Verizon loves to release stuff on Thursday’s. And those aren’t the only devices slated for September 8th.

Remember the mysterious Samsung Stratosphere that leaked a couple of days ago? yeah, that’s supposed to be launch on September the 8th as well. The only thing we know about it is that it is a 4G LTE device and speculation rests on it being that Verizon-bound slider that we saw surfaced in a spy shot. If all of this is true, the beginning of September is looking good.

Other devices supposedly launching in September include the Samsung Illusion which is an Android 2.3 phone and the HTC Bliss which is that phone that is targeted at female demographics.

On October 6th, it appears that Verizon is going to be launching the HTC Vigor which is the device that will supposedly replace the HTC ThunderBolt. The Vigor has some meaty rumored specs and it’s certainly a phone to keep an eye on if the Droid Bionic doesn’t rub you the right way.  Also in October, it appears Verizon will replace another 4G LTE phone and this time it’s the LG Revolution which will apparently be cast aside for the LG Revolution 2 which has a tentative launch date of October 20th.

There are a few other devices listed on the manifest including the Samsung Plato which isn’t scheduled to launch until 2012 as well as the Samsung Galaxy Tab P8 which could be the Samsung Galaxy 8.9 and has a slated release date during the month of November. A 4G BlackBerry Curve is also listed with a September release date but it’s unclear what this device is exactly.

So, it’s going to take a month, but it looks like things are going to be heating up for Verizon in September.