Android Apps how to iPad iPhone

2014 NFL Draft Live Stream: How to Watch The Final Day from Anywhere

The 2014 Draft started at 8 PM Eastern on May 8th in New York City at the Radio City Music hall. Fans can tune in and watch the 2014 NFL Draft on the NFL Network, NFL.com and on ESPN, and there are several mobile options that should also work as long as you are a Verizon subscriber or paying for cable or satellite access.

This is just the start of the NFL Draft for 2014, which continues on Friday evening May 9th at 7PM Eastern and goes full-time on Saturday May 10th from 12-8 PM Eastern. Like we said, watching the entire Draft is going to require a lot of couch time or you’ll need to switch over and watch the 2014 NFL Draft live on your iPad, iPhone or Android smartphone. 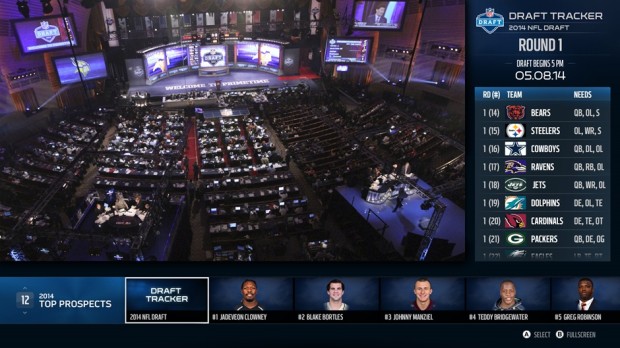 Watch the 2014 NFL Draft live stream on iPhone, iPad, Android, TV, Computer and even the Xbox One.

Fans will want to make sure they tune in for the first day of the NFL Draft as it is the most exciting with teams selecting their first round draft picks. The second and third round take place Saturday and the rest of the picks are on Sunday.

The first round is where we will likely see Jadeveon Clowney, Khalil Mack, Johnny Manziel, Greg Robinson, Sammy Watkins and other college stars picked up by teams in need of new star power.

The NFL Draft is a player selection process where all 32 NFL teams meet to choose from the best college players or individuals that are out of high school for three years.  As exciting as the Draft process is for fans, there is no football played during this event. The 2014 NFL Draft order is determined by a schedule that puts the Super Bowl winner and loser at the end, so that the worst teams have an earlier shot at getting a great new player.

The Houston Texans take first pick, followed by The St. Louis Rams thanks to a trade with the Washington Redskins and the rest of the teams follow with the Denver Broncos and Seattle Seahawks taking the final picks in round one. There are many small changes to the order as the NFL Draft moves on to the later rounds where teams start to trade picks for other players.

Here are the best places to see the 2014 NFL Draft live on a TV, on an Xbox One or on an iPhone, iPad or Android device. The 2014 Draft live stream is a little bit better than watching a Sunday NFL game, but it is still a confusing mess of who and where the event will be streamed.

If you are watching on a TV, go to ESPN or the NFL Network. Both channels will show the 2014 NFL Draft with commentary, buildup and a little hype.

For users that are watching on a computer, go to the NFL Draft page to watch live. There is a chance this will work on the iPad, Android or iPhone, but we won’t know until the actual 2014 Draft live stream starts.

If you subscribe to a cable company or satellite provider that includes WatchESPN access you can tune in to the WatchESPN app on iPad or iPhone and on Android. This is a free app and the stream is free with most cable plans that include ESPN.

Verizon iPhone and Android users can tune in to the NFL Mobile app to watch the 2014 NFL Draft live stream from anywhere with WiFi or a Verizon signal. This app is free, but users will need to pay a $5 monthly subscription to watch the draft. Make sure you cancel after, unless you want to pay $5 a month all summer long. Download the NFL Mobile app on Android and on iPhone or iPad.

If you own an Xbox One the NFL app will also include a 2014 Draft live stream for users that download the free app and have an Xbox Live subscription. If you are in front of a TV screen this may be the best way to watch thanks to the Draft Tracker that snaps to the side to show the upcoming teams and what they need from the Draft.

The reason that big football fans are so excited about the draft is that it brings the possibility to help turn a team around with fresh talent. A team without a strong player in a key position can draft the best new player for that spot and hopefully make a good match with existing players to improve overall in 2014.