The 2014 Olympics are underway in Sochi with many events in progress or already completed with medals awarded. As the Medal Standings start to shape up, many viewers are looking to catch up on the Winter Olympic highlights on their iPhone or Android device thanks to the time difference between U.S. and Russia.

Many of the 2014 Olympic events take place between Midnight and the early hours of the morning Eastern. With such a dramatic time difference users are turning to highlights and 2014 Olympic streams to catch up on the winners.

Searching YouTube for 2014 Olympics highlights isn’t going to offer much success for users in the U.S. There is an official NBC Olympics account, but instead of showing who won medals and amazing performances it only offers athlete profiles, Olympic fashion tips, Olympic pets and for some reason a lot of Ryan Lochte and former Olympic coverage. 2014 Olympic coverage from other sources like the CBC are not available to watch in the U.S. 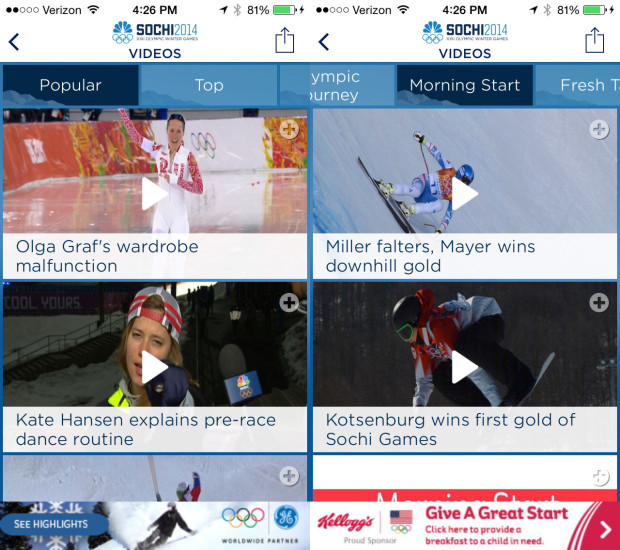 The 2014 Olympic highlights are available on iPhone, iPad and Android, but not on YouTube in the U.S.

For users looking for the top 2014 Olympic videos and highlights, there is an app on Android and iPhone that lets you catch up on a lunch break, and can even let you watch some events live from bed. Google also helps with fast access to the 2014 Olympic schedule and medal standings.

iPhone and Android users can see the 2014 Olympic Highlights in the app ranked by time or popularity, making it a fast way to catch up on what’s happening in Sochi. The top 10 2014 Olympic highlights so far are,

The list of 2014 Olympic highlights goes on. Users can watch the highlights on the iPhone, iPad and Android devices on WiFi and on cellular. Some of the highlights include athlete interviews and reactions as well as footage of the games. Each video starts with an ad, presumably for an official sponsor.

For users that want to check the schedule this app handles that, but Google Now on Android and Google Search on iPhone also show the schedule in a handy format. 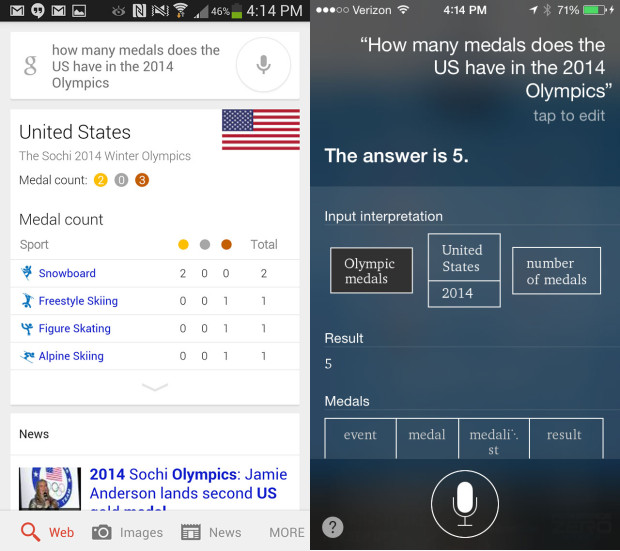 Siri and Google Now can answer questions about the 2014 Olympics.

Google Now on Android and Siri on the iPhone also offer fast access to Medal Standings. Ask Siri or Google Now, “How many medals does U.S. have in 2014 Olympics?” or a similar query and the services immediately return results on-screen and by voice.

The 2014 Winter Olympics are taking place in Sochi Russia and run through Sunday February 23rd. The games drew attention early for Russia’s stance on LGBT rights, allegations of mismanaged funding and poor accommodations and concerns about hacking. Despite a small malfunction at the 2014 Winter Olympic Opening Ceremony the games are off to a good start and competitors continue to prepare and compete in many events.