The 2017 Chevy Malibu is a far cry from the boring rental car option you spent three days in after a long flight. A stylish exterior and plenty of legroom combine with a good driving experience to check the boxes you need on a car you’ll own for years, instead of tolerating for a long weekend.

New for 2017 Chevy adds Apple CarPlay and Android Auto support to the base radio and adds in Teen Driver controls to the entry level option for more control over what your teen can do in the car when you aren’t riding shotgun.

The 2017 Malibu Hybrid delivers better fuel economy without taking performance down a notch. This car is comfortable for short and longer trips, but the batteries take away some trunk space so that is something you will need to keep in mind for any longer trips. 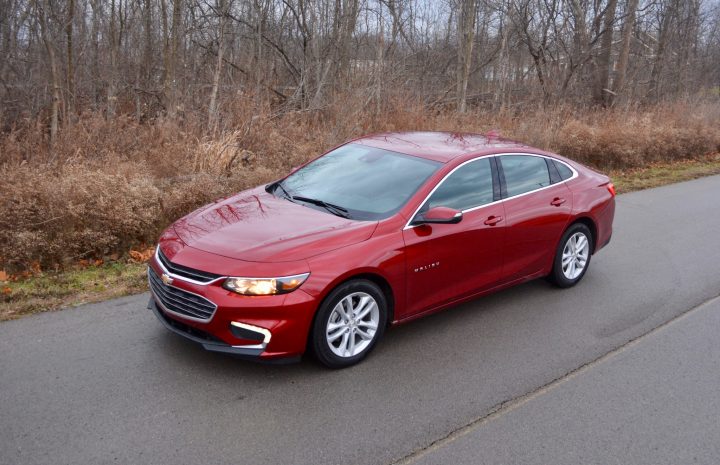 We spent a week driving the 2017 Malibu Hybrid, which includes a nice set of base features and upgrades from the entry-level model. Buyers get an extended warranty on the hybrid drivetrain parts, providing peace of mind in the event that something goes wrong while you own the car.

The 2017 Chevy Malibu starts at $21,680 for the base model. Upgrading to the Malibu Hybrid brings the starting price up to $27,335. We enjoyed the Driver Confidence Package ($1,195) and the Convenience & Technology package ($895) that are well worth the price.

The 2017 Chevy Malibu Hybrid delivers a very good driving experience with responsive steering and acceleration. Chevy delivers very good braking that captures power to the battery while maintaining the familiar feel of a gas car. In many hybrids, the recapture process leads to brakes that feel too grabby, but that is not an issue on the Malibu. 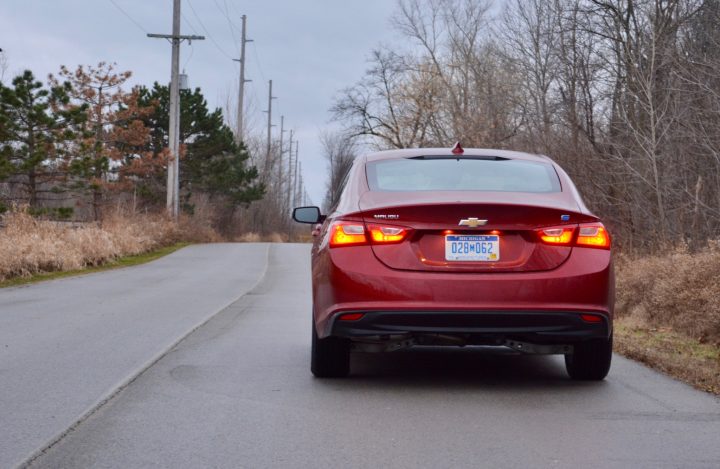 While not outright sporty, acceleration is quite good thanks to the added boost from the electric motors. When the car switches to gas power the transition feels seamless, though you will hear the gas engine come to life. The road noise, and with it engine noise, is louder than expected. The ride is good even on poor roads and the car is responsive to your controls.

This hybrid car uses a combination of gas and electric to stretch your fuel longer. You won’t be traveling on all electric for very long, but thanks to smart switching, regenerative braking and the ability to stay on the electric motors longer the fuel economy is very good.

The EPA rating is 49 city, 43 highway and 46 mixed. This is in line with what we saw during specific drive tests. The overall combined rating was lower for our week with the car, likely due to inclement weather and a more aggressive driving style for parts of the testing.

The newer Malibu models catch your eye with a commanding front and stylish sides that make this mid-size car stand out from the pack. LED daytime running lights also help draw attention to the front of the ride. On the outside, you won’t see much of a difference between the gas and the hybrid model, but you do lose some trunk space.  The rear seats fold down, but thanks to the battery placement you can only slide small items through this area. 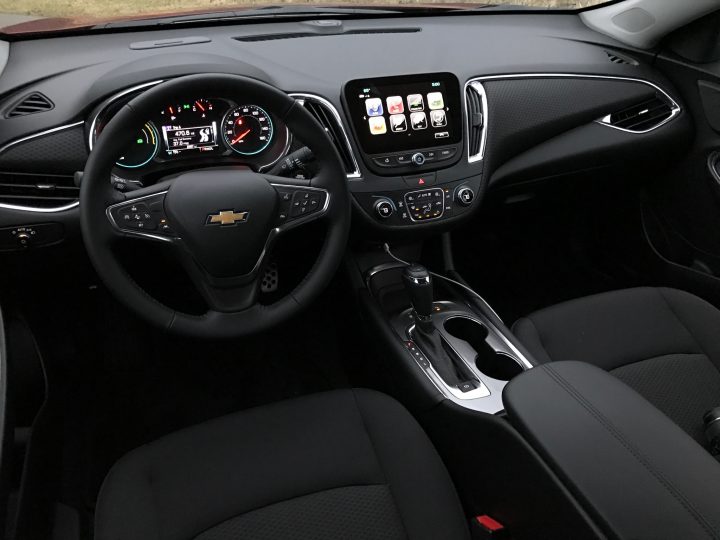 The 2017 Chevy Malibu interior alternates between cloth and plastic.

Inside there is plenty of room for the driver and passengers with good rear legroom. Even though the roof slopes quite dramatically on the outside headroom isn’t an issue for most passengers. The seats are comfortable, but firm, and offer many adjustments to find a comfortable position.

The cloth accents on the dash and doors offer a nice respite from the rest of the plastic interior and the checked pattern spruces up the interior.

The Chevy MyLink system is easy to use and offers fast access to tools you need on the road. The onboard 4G LTE connection lets you use the car as a hotspot to connect to the Internet and also allows you to use the myChevrolet Mobile app to start and stop the car, lock and unlock and quickly send directions from your phone to the car. This is all in addition to OnStar.

Chevy MyLink includes app support for Pandora and other services. It responds fast to touch and includes all the features we need right off the bat. If you plug in a supported iPhone or Android smartphone you can use Apple CarPlay or Android Auto. These put a familiar interface and familiar voice control options on the screen. From an iPhone, this also delivers much better access to messages. This support is standard across the entire Malibu lineup.

Teen Driver controls are also standard with important safety changes and even a report card on driving behavior. With this enabled, you can control:

Parents will also appreciate the rear seat reminder chime and alert. If you open the rear doors right before, or during a trip, you will get an alert to check the back seat when you turn the car off. This will help you avoid leaving a child or pet in the car. 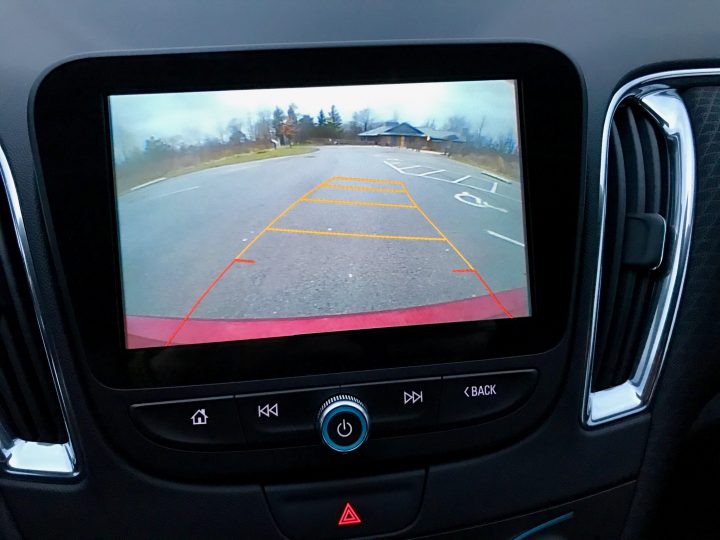 Chevy offers an array of safety features on the 2017 Malibu.

With the Driver Confidence Package you gain automatic high-beam headlights, which you will definitely use due to the poor reach of the low beams, as well as other safety features such as:

With the Convenience and Technology package you also gain remote start, a larger screen on the dash, wireless device charging, a 110 V outlet in the back, leather wrapped wheel and USB charging ports in the back seat.