The 2020 Toyota 4Runner is a capable off-roader that leans into the rugged looks, packs in essential features, and a few handy tricks. It can seat up to 7 when you’re hauling family and friends, yet it is still incredibly capable when you take it off the beaten path. In a world of cushy SUVs, the 4Runner sticks with a body-on-frame design, and it’s ready to climb rocks and tackle the mud. With an upgraded infotainment system and standard Toyota Safety Sense-P drivers will find better tech in the 4Runner as well. If that sounds like what you’re looking for in a new SUV, keep reading for the details.

You can choose the Tundra in a base model that starts around $36,120, or you can option up to off-road ready models and trims with more luxury features inside. There are also several special editions to choose from. I spent the week testing the 2020 Toyota 4Runner TRD Off-Road Premium with the optional sliding great deck, a Kinetic Dynamic Suspension System, and TRD Pro Exhaust. 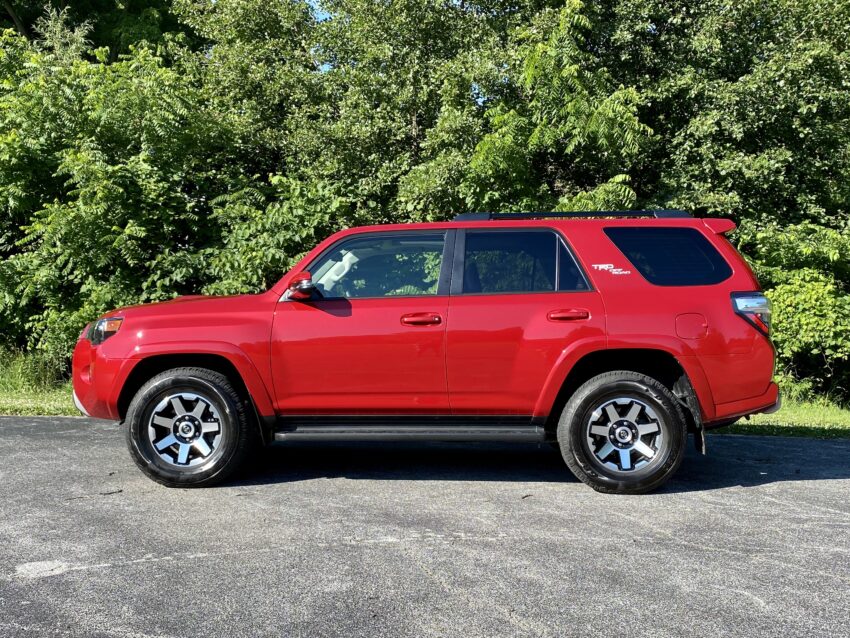 On the road, you will feel a rougher and bouncier ride than in a Rav4 or many other SUVs. The 4Runner shares more with a truck than most SUVs, which is why it is so capable off-road. If you plan to spend almost all of your time on the road, this may not be the right choice. Buyers looking to get to the trail and then enjoy the mud, rocks, and sand will enjoy everything that the 4Runner offers. On top of the capabilities, you get an electronic locking rear differential, crawl control, and a terrain select four-wheel-drive system that can help you conquer what is in front of you. Skid plats on the engine, front suspension and gas tank add to the 4Runner’s off-road-ready prowess.

The 4Runner is rated to tow up to 5,000 pounds, which puts it ahead of the Wrangler, but still behind the Grand Cherokee.

The fuel economy is rated at 17 mpg combined, with 16 mpg in the city and 19 mpg on the highway. 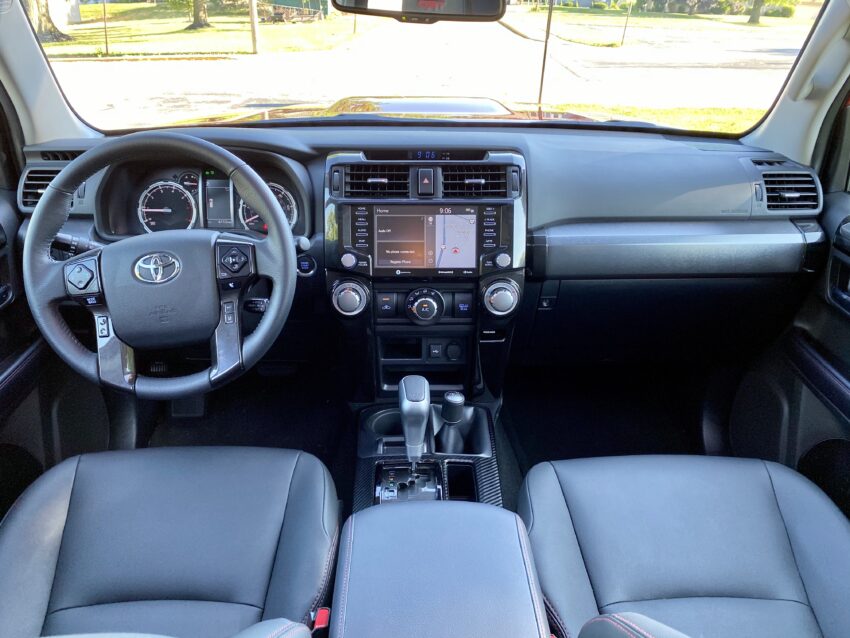 Utilitarian and usable, with nice touches on the TRD Off-Road Premium trim.

The 2020 4Runner’s distinct look is bold and it looks especially good in bright red or army green. I like that the exterior holds no punches in looking like it is ready to hit the trail. It stands out when many SUVs simply look the same.

Toyota focuses on usability over luxury inside, even on the TRD Off-Orad Premium trim. I like the ease of getting in and out of the driver seat and the spaciousness of the front seat. The back seat offers good legroom, and headroom is good thanks to the higher roofline ceiling in the back seat. Our model was equipped with seating for 5, but you can option with a folding third row.

The layout in the front of the 4Runner reminds me of a truck with chunky dials and buttons that are easy to reach, grab and press — even if you have gloves on. There is a decent amount of storage in the doors and the center console. The TRD Off-Road Premium model includes TRD emblems throughout and accent stitching. The front seats are heated. 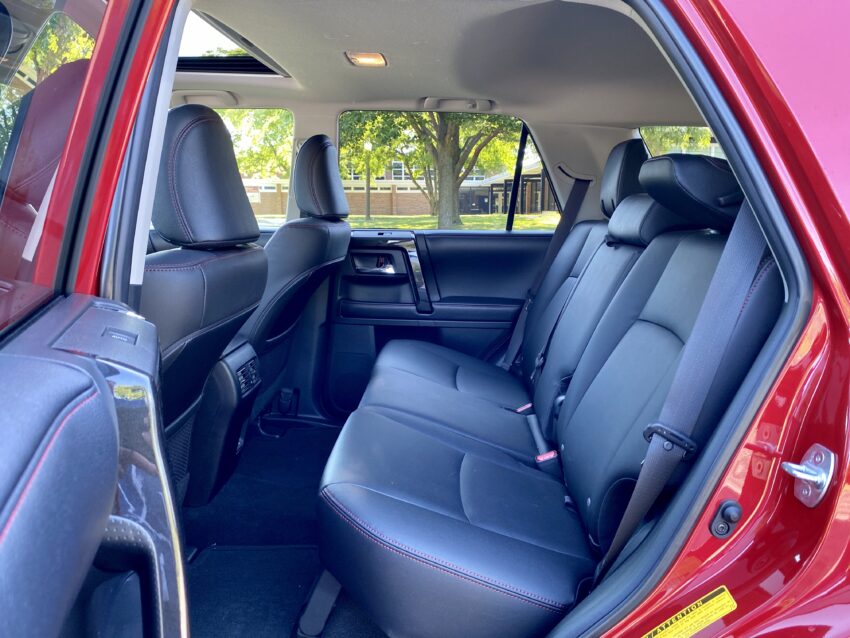 Plenty of room in the second row.

You’ll find more cargo capacity than many competing SUV’s in this class, especially when you fold down the second row. There is a standard outlet and a 12V outlet in the back of the vehicle so that you can charge up gear, power a tailgate accessory, or handle other random tasks. This loaner came with a sliding rear cargo deck, which is a $350 option. This deck slides out past the bumper as a place to set up tailgating gear, act as a base camp on the trail, have a picnic, or just hang out after a long day. It’s a really cool option and one I highly recommend.

One of my favorite features is that the rear window in the tailgate goes completely down. Press a button and it retracts into the liftgate. Combine this with open windows or an open sunroof and you get a lot of air and a very open cabin feeling. The liftgate is not powered, which feels like an oversight for a hefty and high opening back end. 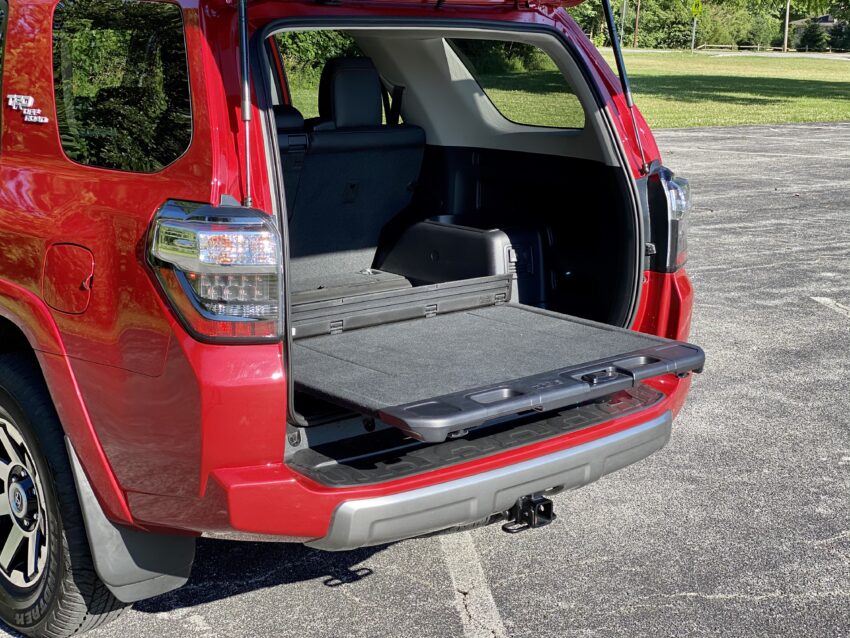 I love the slide out cargo area option.

Toyota now includes a standard 8-inch infotainment system with support for Apple CarPlay, Android Auto, and Amazon Alexa. This is an 8-inch touch screen in the middle of the dash that is easy to see and the system feels snappy. Plug in your iPhone or Android and you can choose to use CarPlay or Android Auto to easily manage your calls, messages, music, and navigation. The Toyota system is alright, but ultimately most users should plan to use one of these options. 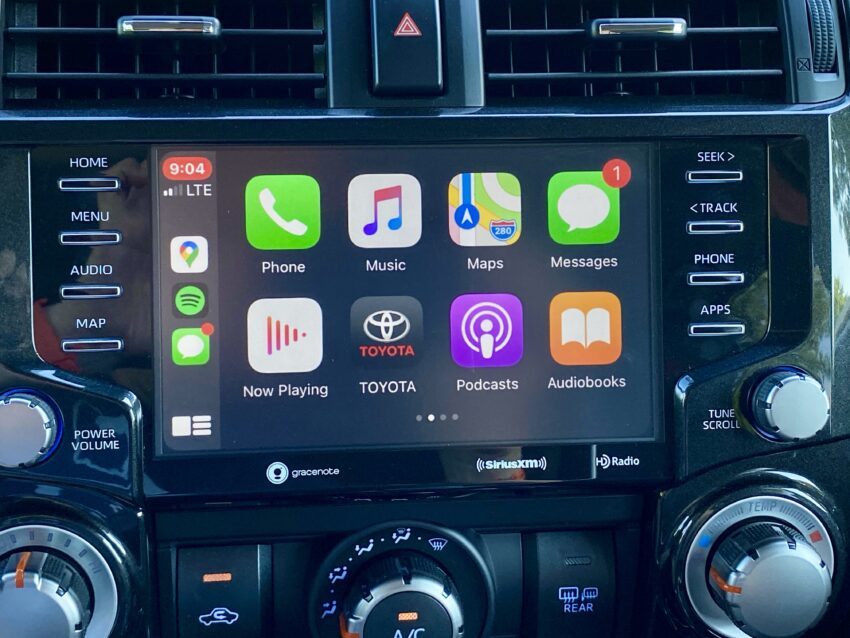 With Apple CarPlay, Android Auto and Alexa standard, you have a competent infotainment system.

The 8-speaker premium audio option is standard on the TRD Off-Road Premium trim and it sounds good, with enough volume to fill the cabin even when cruising with the windows and liftgate window down. The speakers work well for taking calls and navigation as well.

Toyota Safety Sense P is standard on the 4Runner. This brings a host of safety and convenience features to all trim levels. With it you get;

The radar cruise control works well, but keep in mind that it only works above 25 miles per hour. That means it is great for the highway, but it doesn’t handle stop and go traffic like many systems now do. There is no blind-spot monitoring option on any trim level.