Nokia, which had been modestly conservative with its CPU clock speeds in the past due to the efficient nature of Symbian in resource requirements, is making an aggressive play in the Symbian arena with regards to specs. A leaked data sheet reveals 4 new, unannounced Symabian^3 smartphones–Cindy, Fate, Helen, and Zeta–all of which sport the Symbian Belle software update pre-loaded as well as a 1 GHz processor, presumably single-core. 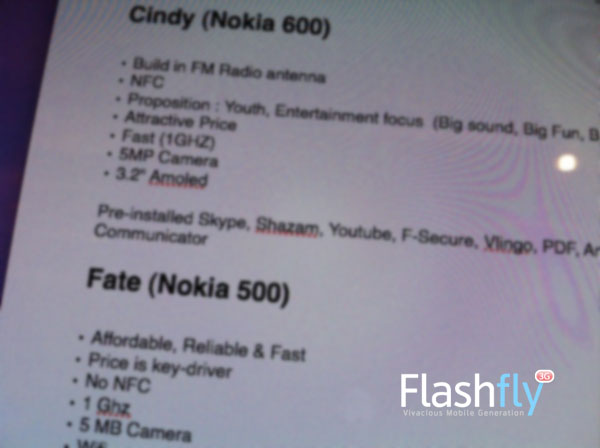 Cindy, which has the Nokia 600 model code, is targeted at the youth and entertainment market with NFC support and a built-in FM radio. It’s stylish with a 3.2-inch AMOLED display, priced modestly, and will come with a 5-megapixel camera.

Fate, which is positioned as a more affordable and reliable handset, will eschew the NFC support and will feature what appears to be a 5-megapixel camera, though it is listed as a ‘5 MB’ camera on the specs sheet. That handset has a Nokia 500 model number. 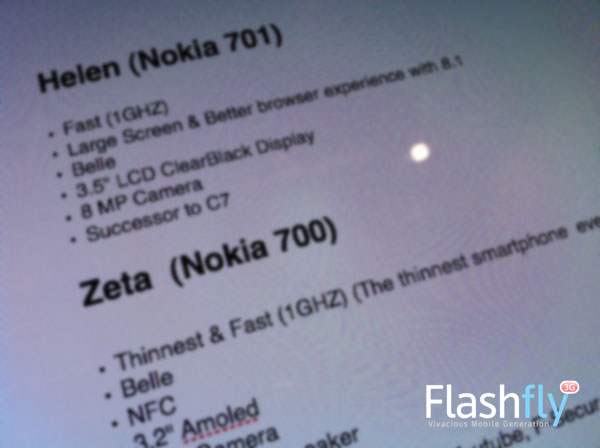 Helen will feature a larger 3.5-inch display with a ‘better browser experience’ and an 8-megapixel camera. It is listed as the successor to the Nokia C7, which launched in the U.S. under T-Mobile as the Astound. It’s unclear if the 8-megapixel camera will be the standard auto-focus camera that’s also found on the Nokia N8, or if the camera will follow the C7’s tradition and be an extended depth of field camera–though the latter is still an excellent camera, it does poorly for macro shots or close ups. The Helen handset has the model number of Nokia 701.

And lastly, Zeta, otherwise known as the Nokia 700, is said to be thin and fast with a 3.2-inch AMOLED display and NFC support. The specs sheet makes note of a camera and speakers, though particular details were cropped out.

While the Nokia N8’s 12-megapixel camera is said to be the king of the smartphones in terms of camera and picture quality, it’s unclear if Nokia will lose that crown with T-Mobile’s announcement of the HTC-made myTouch 4G Slide.