Business and educational users will love the Samsung Galaxy Note 10.1 2014 Edition, one of the best Android 4.4 Kitkat options. It’s got an excellent display, fast user interface and best-in-class note taking and drawing features thanks to the great Samsung S Pen. To help Note 10.1 users better enjoy their device, we’ve collected a list of 5 great tips for getting the most out of the device.

These tips focus mostly on using the Samsung Touchwiz interface that the` tablet’s manufacturer installs as a skin on top of the Android operating system.

Many of these tips will include launching the Settings app on the Note 10.1. To do that, swipe down from the top of the screen and tap on the gear icon in the upper right corner. This opens the four-tabbed Settings app.

Swipe down from the top of the Samsung Galaxy Note 10.1 2014 Edition screen and tap on the gear icon to open settings.

Take a look at our How To that covered the built-in apps on the Note 10.1, and look for our list of great accessories for this tablet later on.

Put Most Used Apps on the Lock Screen 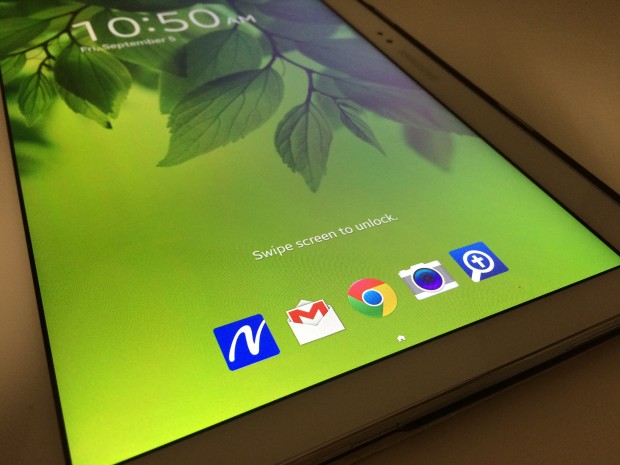 Either open a case with magnetic lock feature or tap the power/home button to show the lock screen.

The Touchwiz lock screen puts most used apps on the screen so the user doesn’t need to unlock their tablet to quickly open these five apps. Just tap that app icon to launch it from the lock screen. Change which app icons show up on the lock screen from inside Settings. 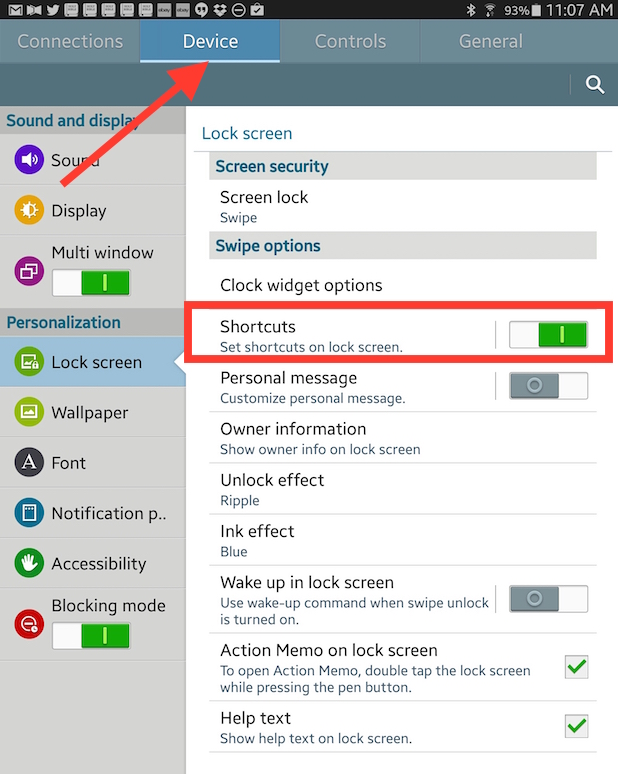 From the Lock screen item under the Device tab, turn on Shortcuts and then tap the item to open the customization screen.

Tap Shortcuts from the Lock screen item under the Personalization section. There’s a screen of five icons that will show up. Tap on an icon to change it to a different app. This opens the Apps list. Tap an app to place it on the lock screen.

Which icons should users put here? Don’t just put the most used apps. Instead pick apps that you’ll need to get access to quickly when your tablet is in sleep mode. When I’m in a meeting or someone asks a question, I can quickly access certain icons. For example, put a calendar app, Chrome, a camera app for scanning documents, or other apps that a person might need in an instant. 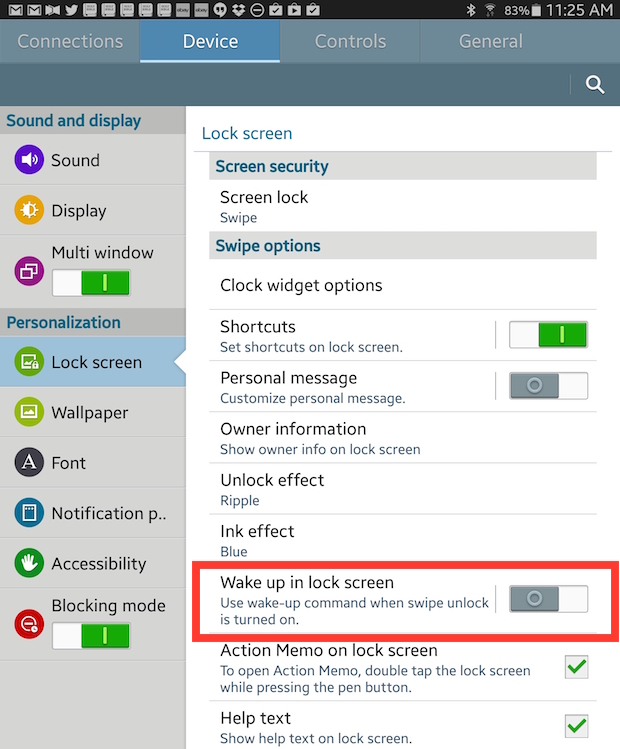 The Galaxy Note 10.1 will open to the lock screen, an Action memo or other functions. Change this setting to customize.

Users can open their Galaxy Note 10.1 in different ways and open them to different locations in the user interface. Change these by opening Settings and tapping on the Device tab and then the Lock screen section.

First, turn on the Wake up in lock screen feature. Then tap on that item to customize it with a wake up voice command. Touchwiz gives four different optional wake up places, like waking up to the home screen, in the camera, calendar or music app. Tap on Wake up function 1. After the user taps the numbered option, the Note will offer four possible options: 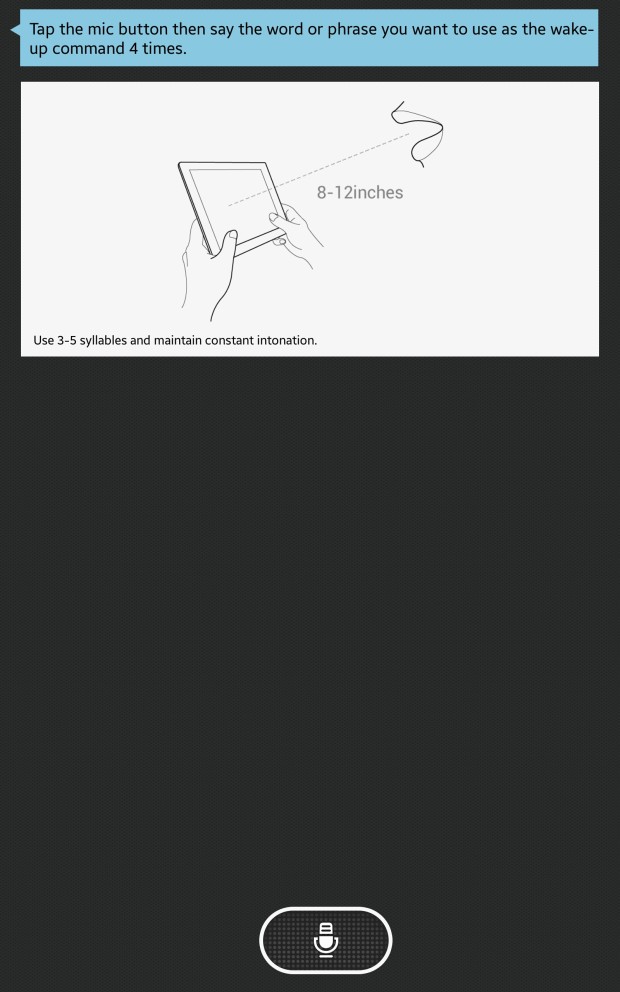 After the user taps the numbered unlock function, a new screen will show up with the mic customization tool. Tap on the mic icon at the bottom of the screen and speak the unlock command into the tablet. For example, use “Unlock My Note” to simply unlock the tablet. Choose something like “Open Camera” to start the camera.

Another way to open the lock screen is to use the S Pen. One item in Settings turns on the feature to turn on the screen using a Double tap on the lock screen while holding down the S Pen button. This will open up an Action Memo. 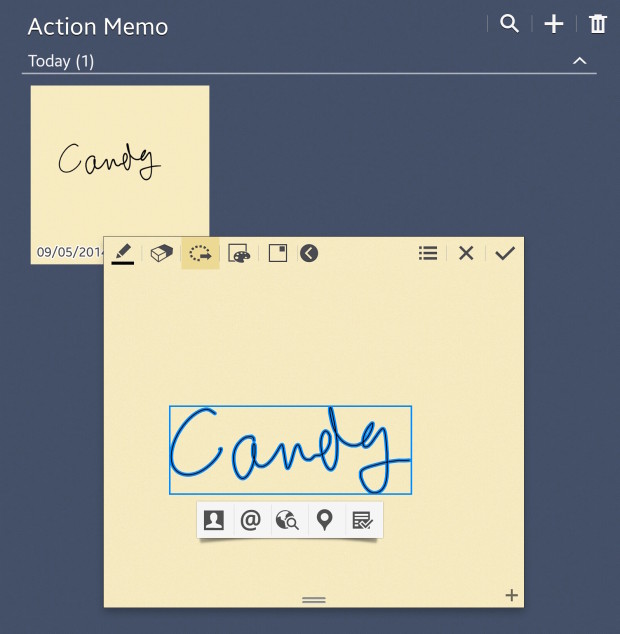 Action memos let users write things like a web address and then open it in a browser.

Action Memos let users write something and then interact with that written text in one of five ways:

Touchwiz includes a notification panel at the top of the slide down notification screen. The buttons work like shortcuts to key settings in Android. For example, tap on the Wi-Fi button to turn Wi-Fi on or off. Tap and hold it to open the Wi-Fi Settings screen.

Users can change which buttons show up by opening Settings and then tapping on the Device tab at the top and Notification panel along the lower left side. 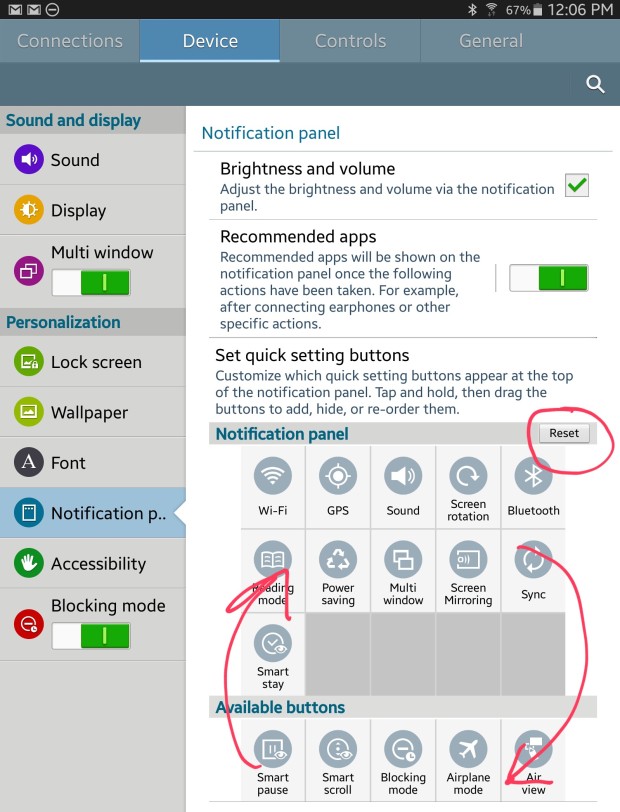 The panel customizations setting screen includes three areas. The first controls whether the Brightness and volume sliders show up in the notification area. A check mark includes these options or clear it to remove it. There’s also an option for Recommended apps, which shows app icons for things like apps that one can use with headphones after connecting them. Turn this on to quickly open such icons.

Finally, as described above, there’s a section to control which settings icons show up and which don’t. Drag the icons from the Available buttons section at the bottom to the Notification panel section above it and vice versa. The Reset button changes things back to the default configuration.

Stop annoying people around you while typing on the onscreen keyboard. Open Settings and tap on Device and Sound. Find the option under Samsung keyboard near the bottom of the screen and uncheck it.

Use Voice Control for Alarms, Camera and Music 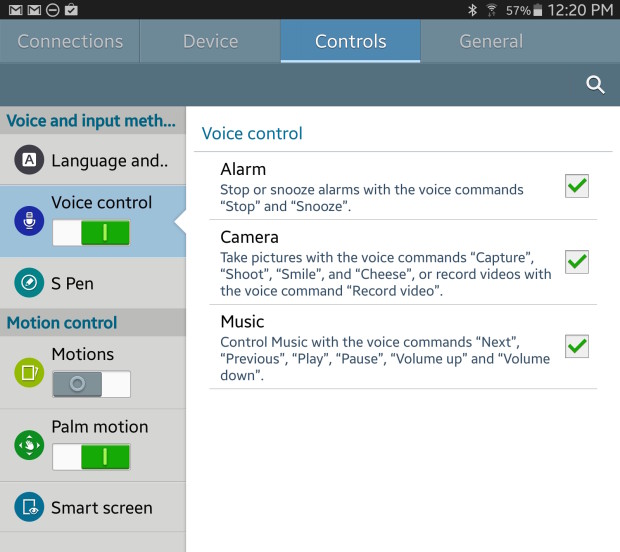 The Alarm feature, the built-in Touchwiz Camera app, and the built-in Music app will respond to voice commands. Turn this on in Settings from the Controls tab. Turn on one or all three of these options.

The settings will explain what commands will control the various apps. It’s a shame that we can’t use different apps, like the Google Play Music app instead of the built-in Music app.