Most Samsung smart phone owners either love Touchwiz or hate it. If you’re in the second camp, try these 10 great Samsung Galaxy Note 4 launchers to replace Touchwiz. These launchers will work on other smart phones simplifying the user interface, transforming it into a more pure Android look, or they add features that make users more efficient.

Samsung calls their user interface Touchwiz. When users press their home buttons and wake up the screen on their phones, they see Touchwiz. It’s the software that organizes the app icons, widgets, the dock at the bottom of the screen and a few other optimizations.

Download what’s called a launcher from the Google Play Store to change the way the Samsung Galaxy Note 4 or other Android phones work and look. Launchers come in many forms, with simple themes that do little more than change the look OS. Others add extra features or tweak the user interface to change the home screen app icons. A few totally re-imagine the Home screen. 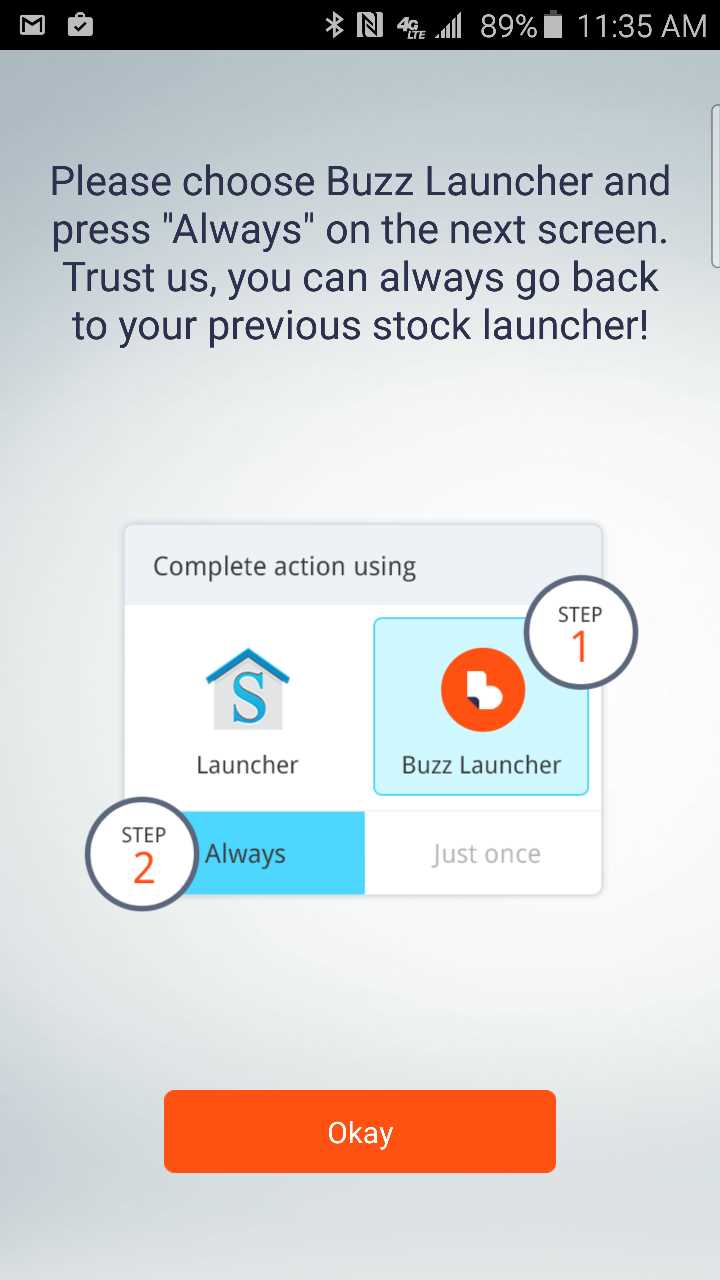 Many of these launchers come with a help screen like this one from Buzz Launcher. It shows users how to select the launcher as the default.

Here are our ten favorite Android launchers that will make the Samsung Galaxy Note 4 a pleasure to use for those who hate Samsung’s default launcher Touchwiz. 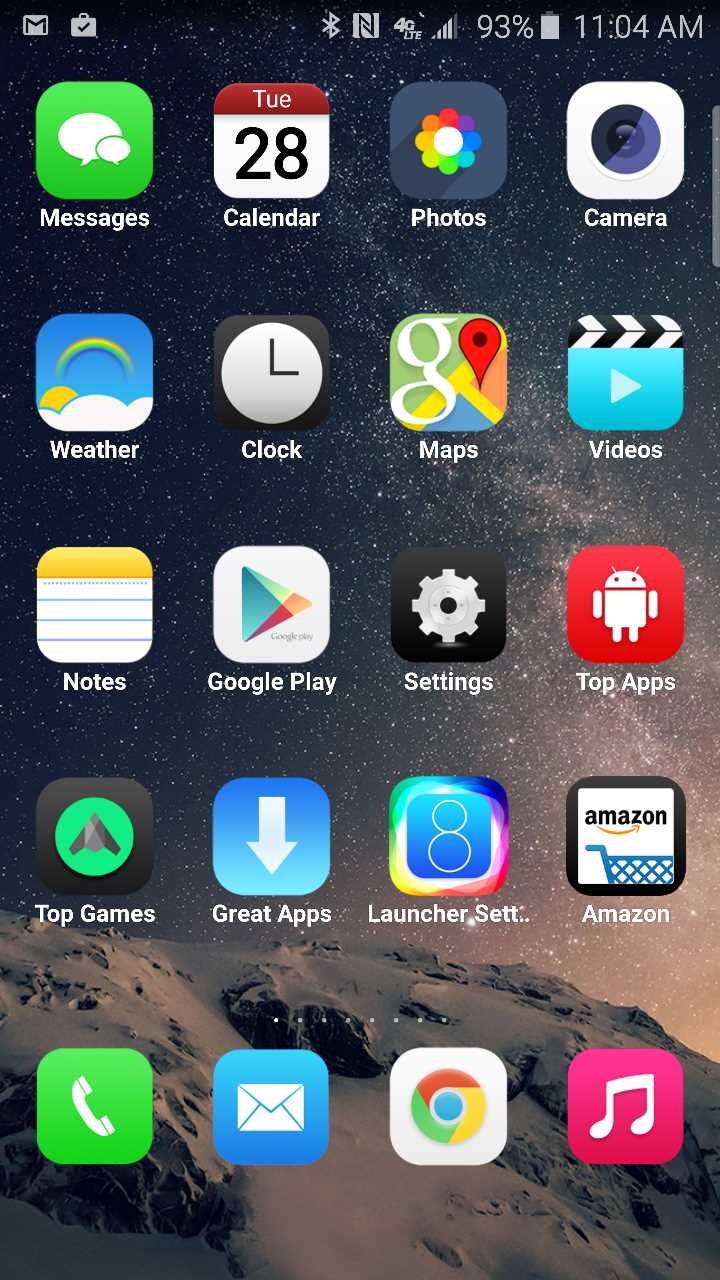 8 Launcher (Free) turns the phone into an iPhone, or at least makes it look like one. The familiar iOS grid of icons and default iOS background shows up on the phone. Organize the phone’s apps into iOS-style folders.

This will make all your friends think you’ve somehow put Apple’s iPhone operating system on your Note 4. It’s also a great choice for switchers who ditched iOS for Android.

Action Launcher 3 (Free – $5 or $10 in-app purchases) does a nice job of taking the phone’s wallpaper and changing the color of the user interface to match. There’s also a nice app drawer that shows up when the user swipes in from the left side of the screen. 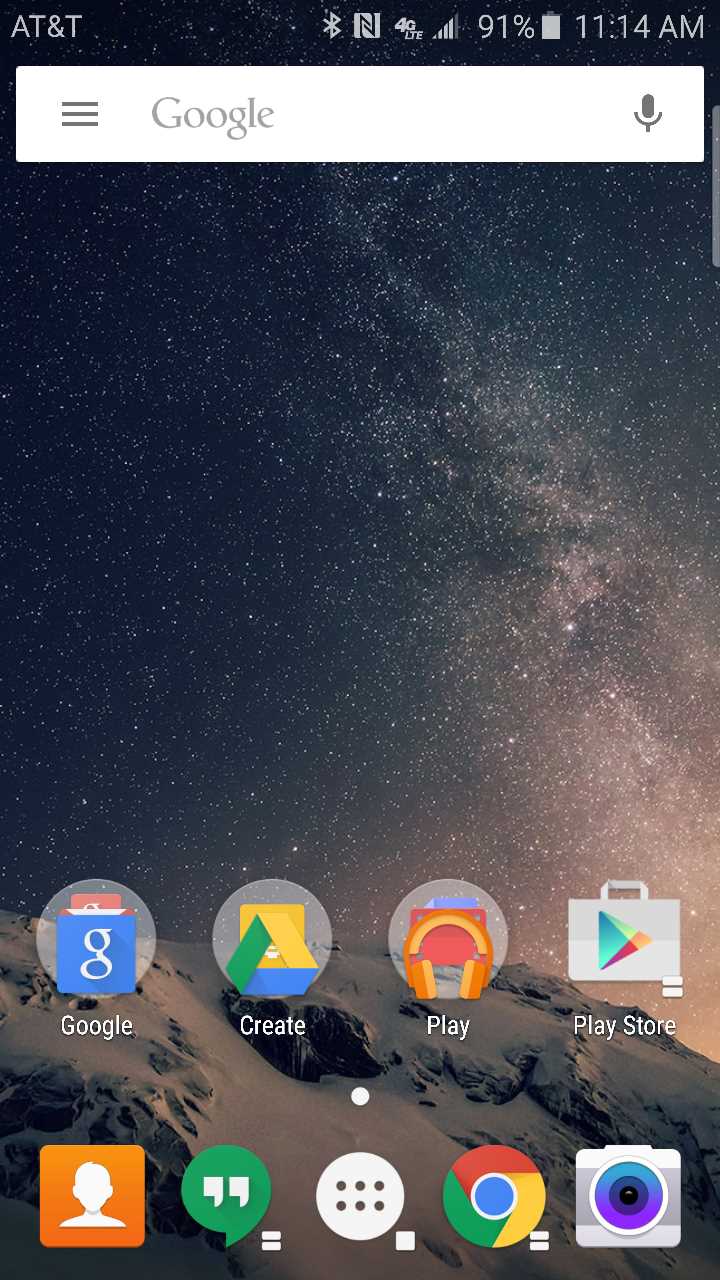 Action Launcher 3 brings material design and some unique gestures to Android and the Samsung Galaxy Note 4.

Some other innovative features need an in-app purchase of $5 or $10 to unlock. They include something called shutters, a different way to open folders. Swipe the screen up to show a shutter, which lets the user quickly create a widget from an app icon. Just swipe from the icon and it automatically creates the widget associated with the app. 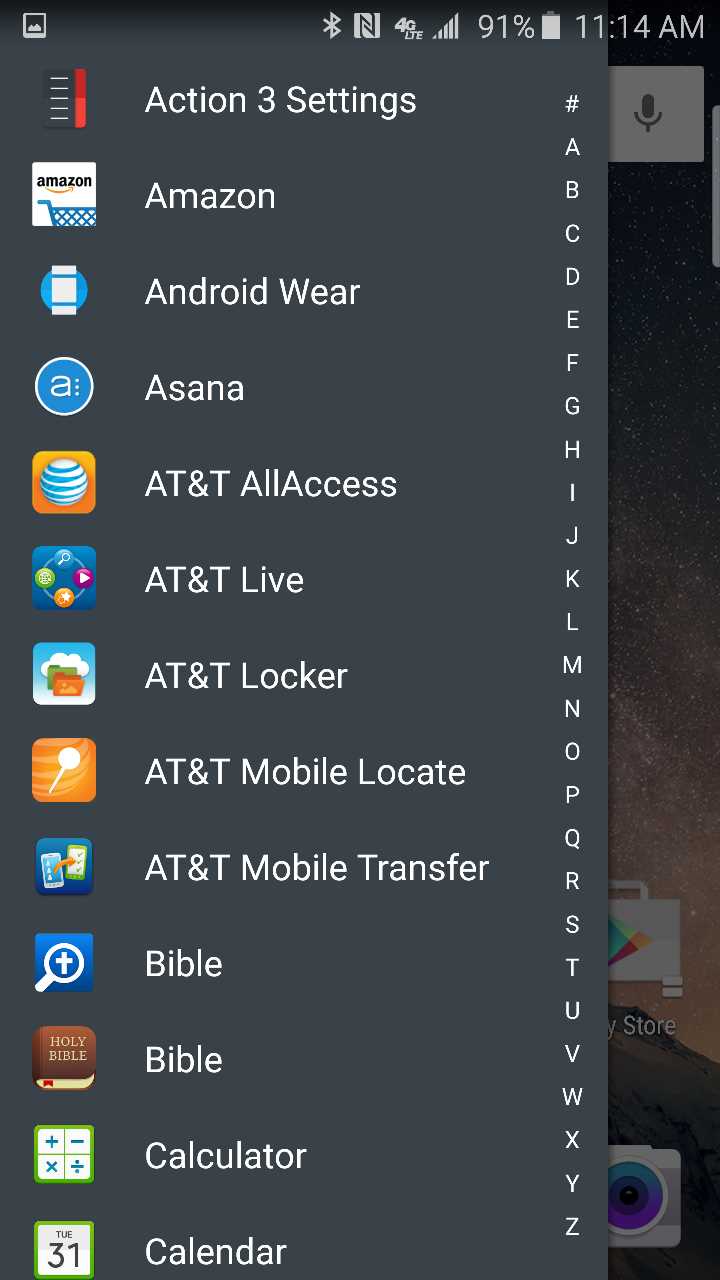 Action Launcher 3’s app drawer slides out from the left side of the screen.

There are a slew of gestures for navigating the phone.

We also get material design, a benefit for people who still don’t have Lollipop on their Note 4.

To add some variety to your Samsung Galaxy Note 4 install Buzz Launcher. The launcher changes the user interface by adding themes. They claim to offer 800,000 plus free themes for use. Change them based on they day of the week, as seen in the video above. 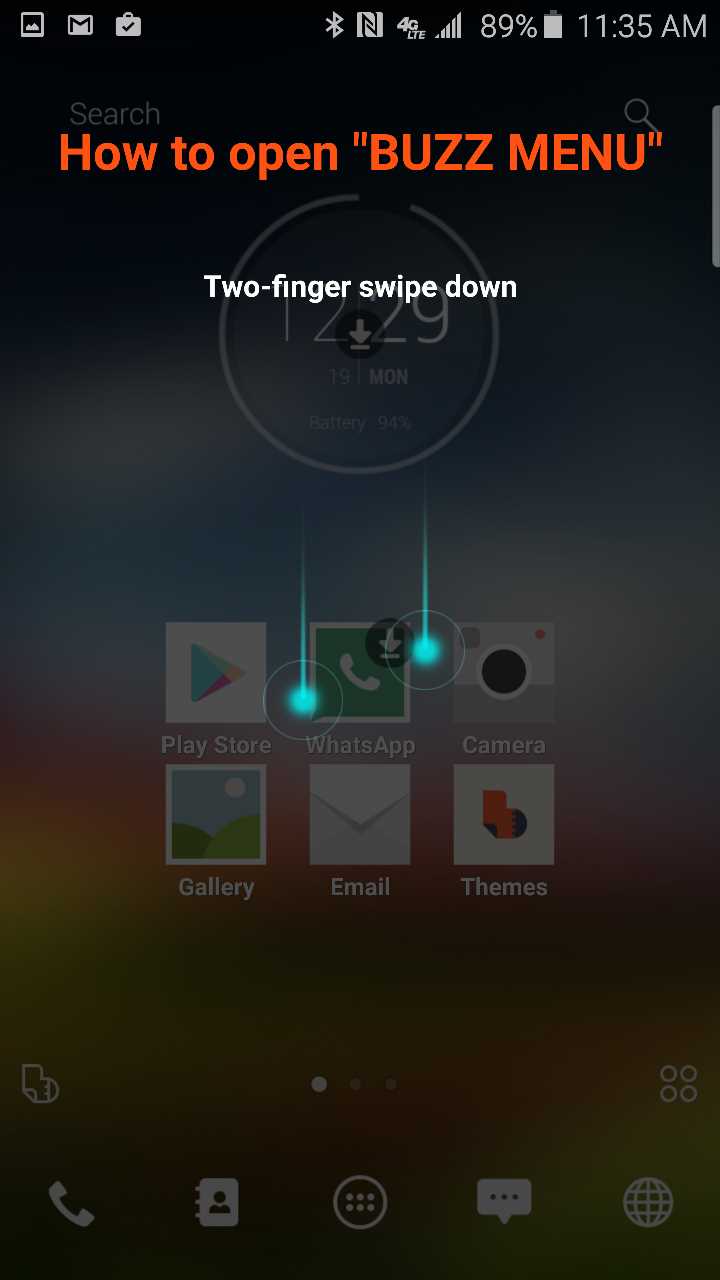 Buzz Launcher uses gestures like this to do things. Swipe down with two fingers to open the Buzz Launcher settings menu.

Gestures open things like the app drawer or the launcher customization menu. The launcher puts the apps you use in folders and then you can change things to suit your tastes. 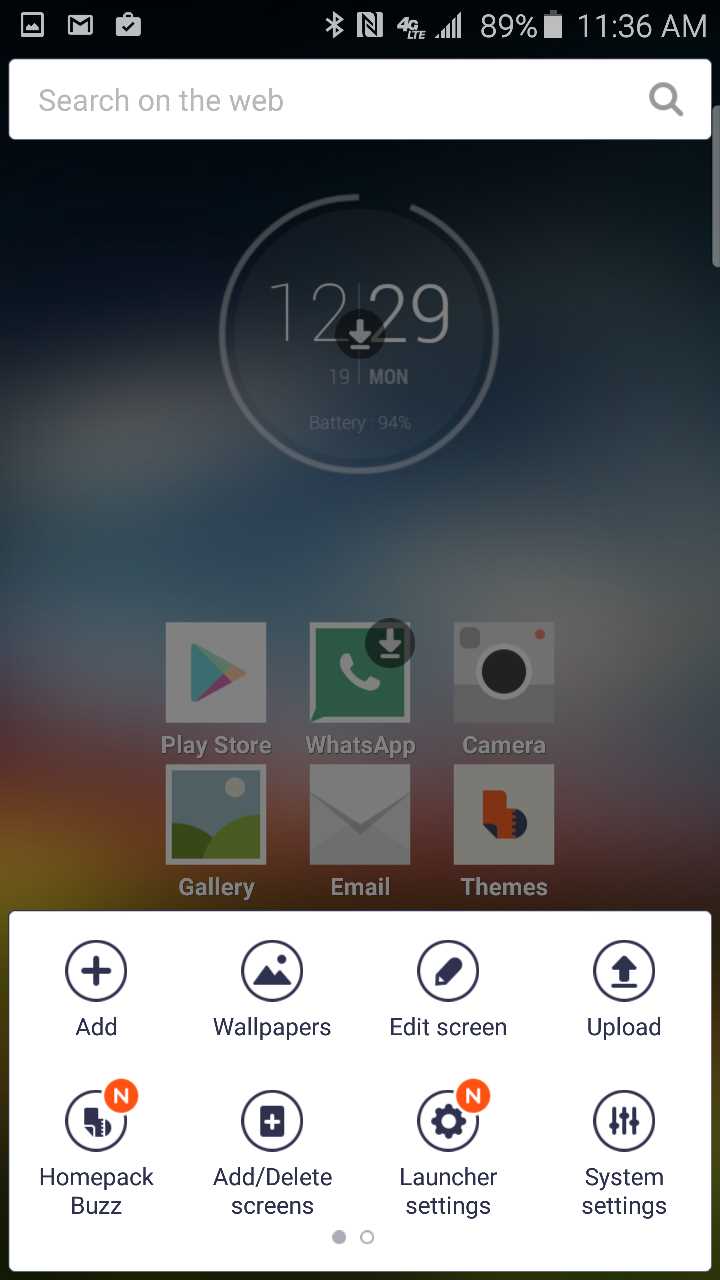 The Buzz Launcher includes a lot of customization options in the settings menu.

The launcher looks beautiful. The themes can customize things the way you like. It’s unlikely that someone can’t find a theme they’ll enjoy. 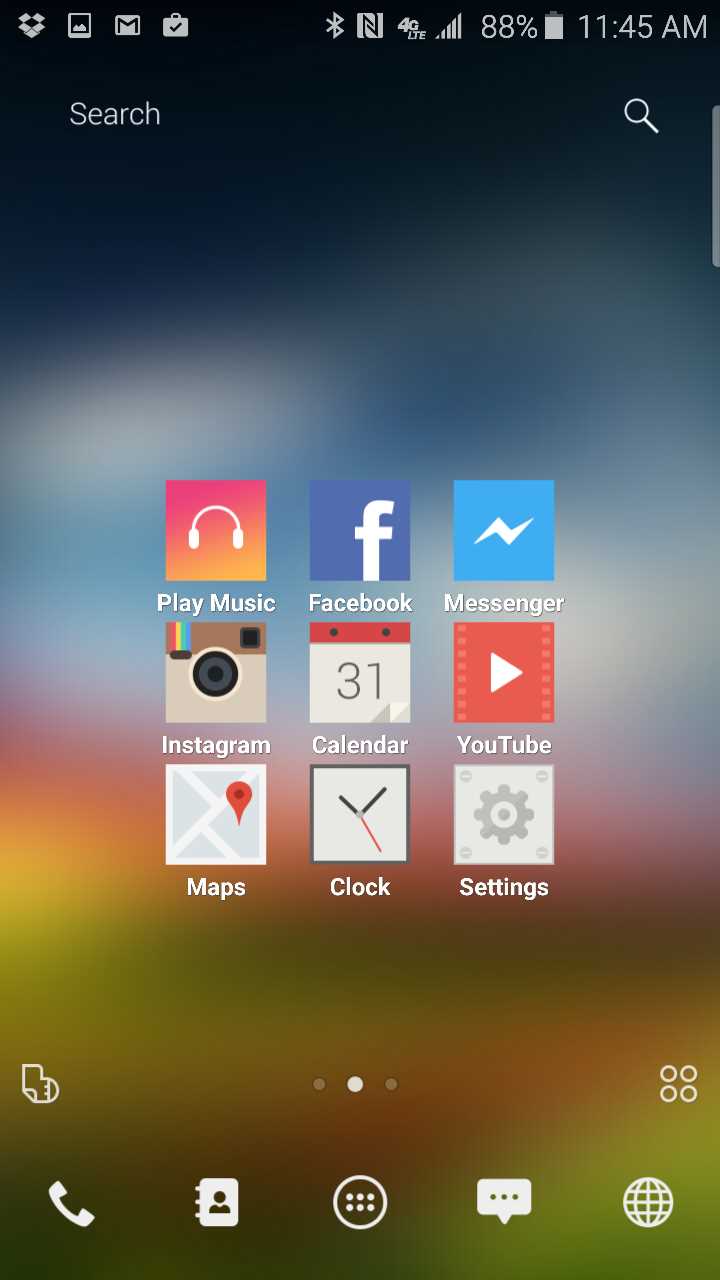 A Homepack collects the user’s personalizations. They can share their Homepacks with others using Buzz Launcher. 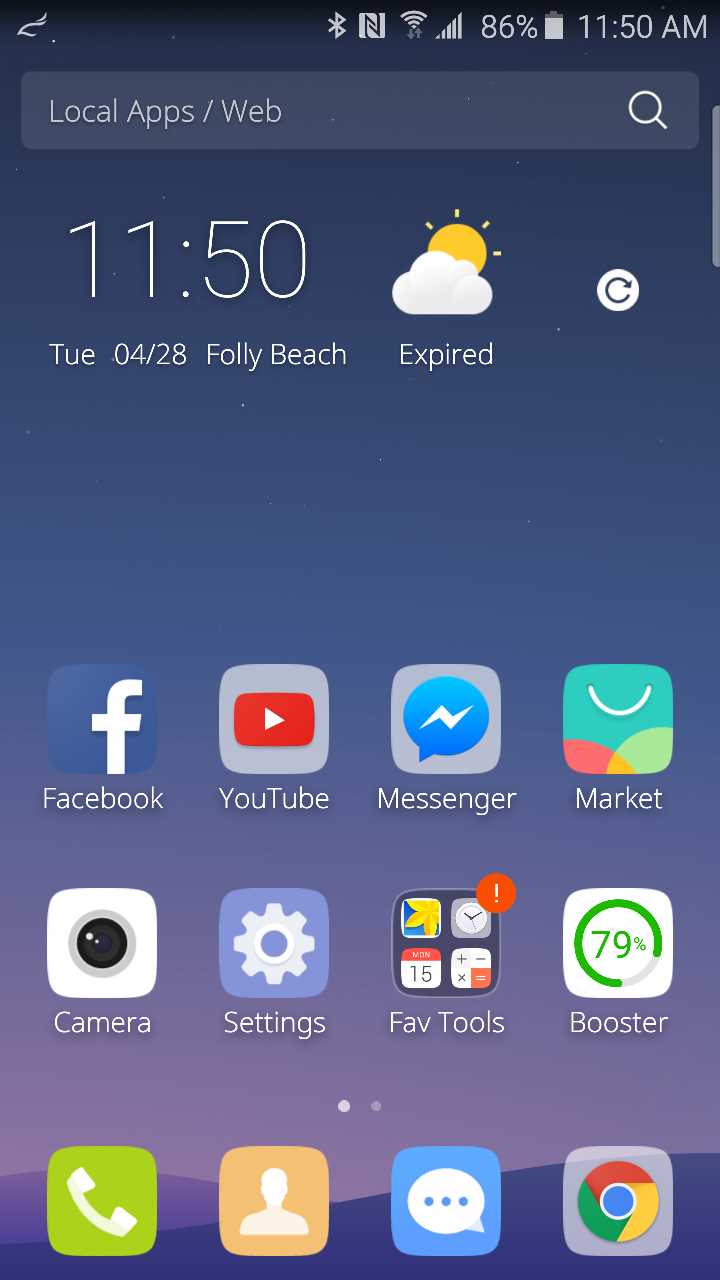 CM Launcher – Boost, Secure (Free) not only changes the phone’s user interface, but also quickly clears out the memory of the phone. This hopefully will speed things up, especially when the phone’s memory holds a bunch of recently launched apps. Add to that the small memory footprint that CM Launcher adds to the phone. This should keep the launcher itself from bogging down the phone’s speed. That’s the “boost” part of the name. The “secure” part comes from a built-in virus scanner. 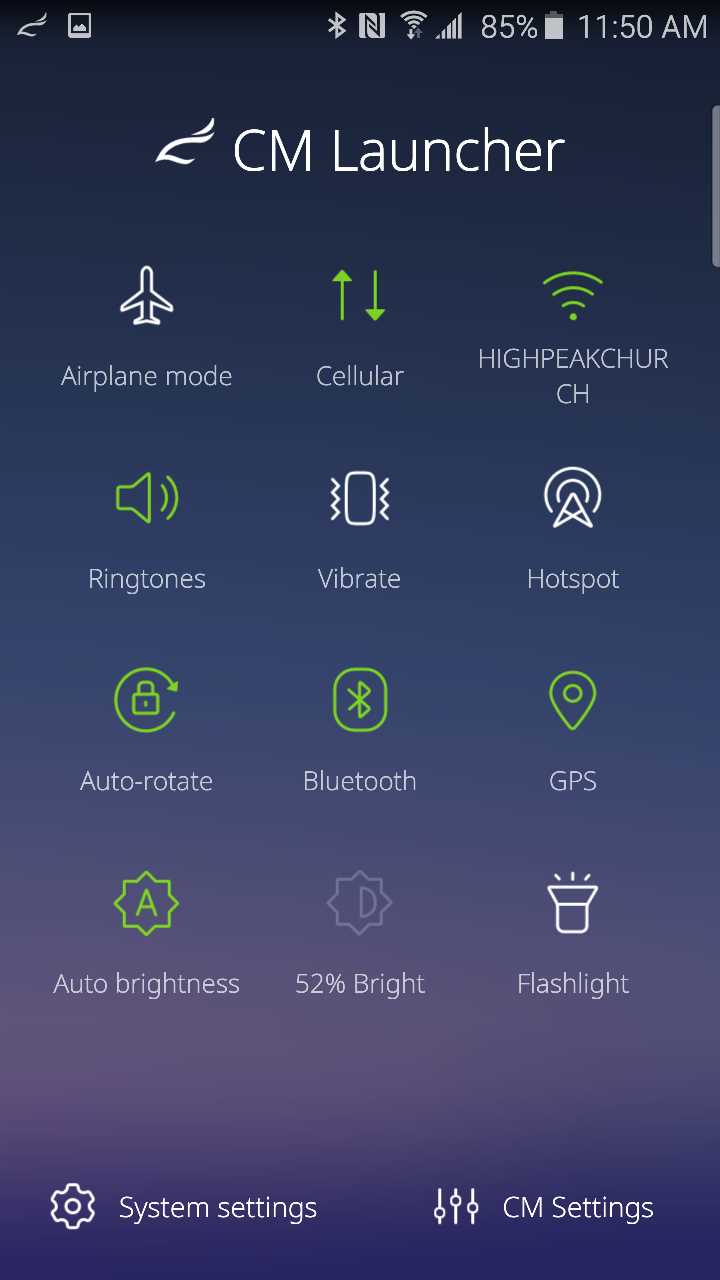 In addition to speeding up the phone and keeping it safe from viruses, CM Launcher learns what apps the user launches most often and shows their app icons on the screen. It also automatically organizes them into folders based on the app category from the Google Play Store. 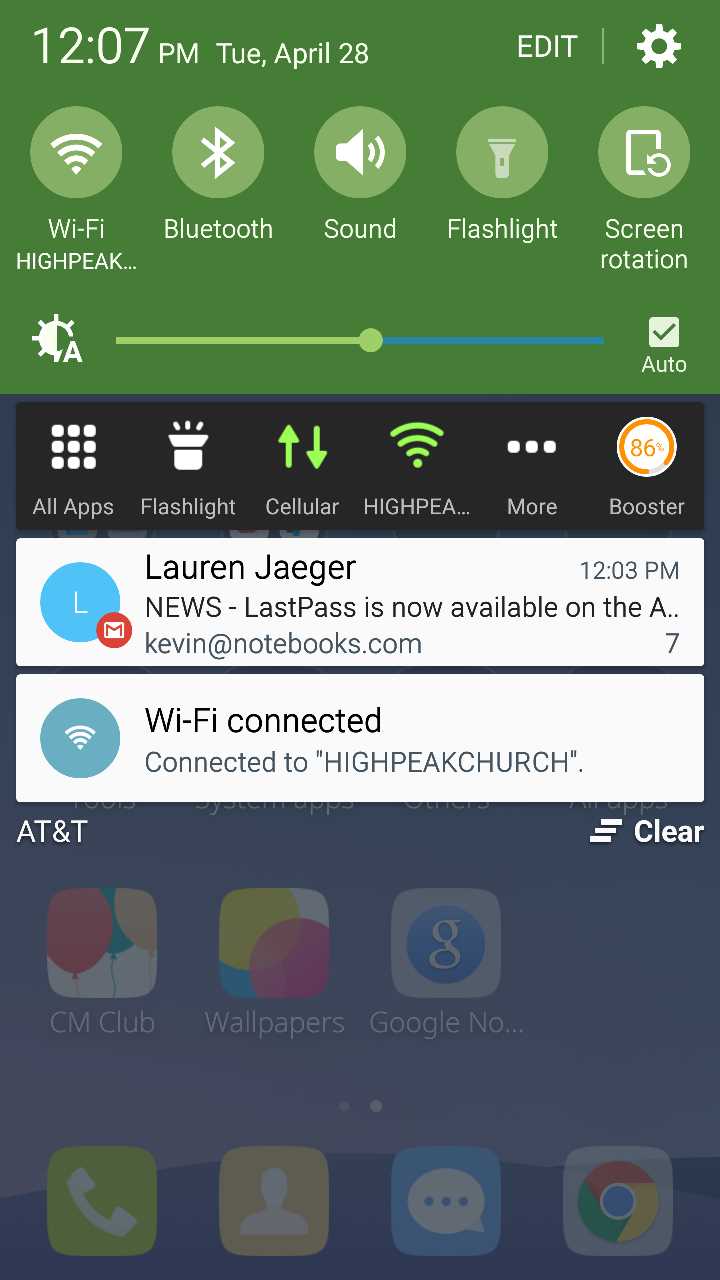 CM Launcher puts a handy toolbar in the notification screen and on the lock screen.

A handy notification area and lock screen toolbar makes the app worth installing even if you don’t use the launcher.

People who don’t like to do the work of organizing their apps, but want them organized, will like the last feature. Others may hate it because it might not organize them the way the they’d prefer.

The EverythingMe Launcher lives up to its name by organizing things based on how the phone’s owner uses things. It looks at what you’re doing and suggests apps, organizes the apps to bring the most uses to the forefront and shows missed call’s contact information if you have it. 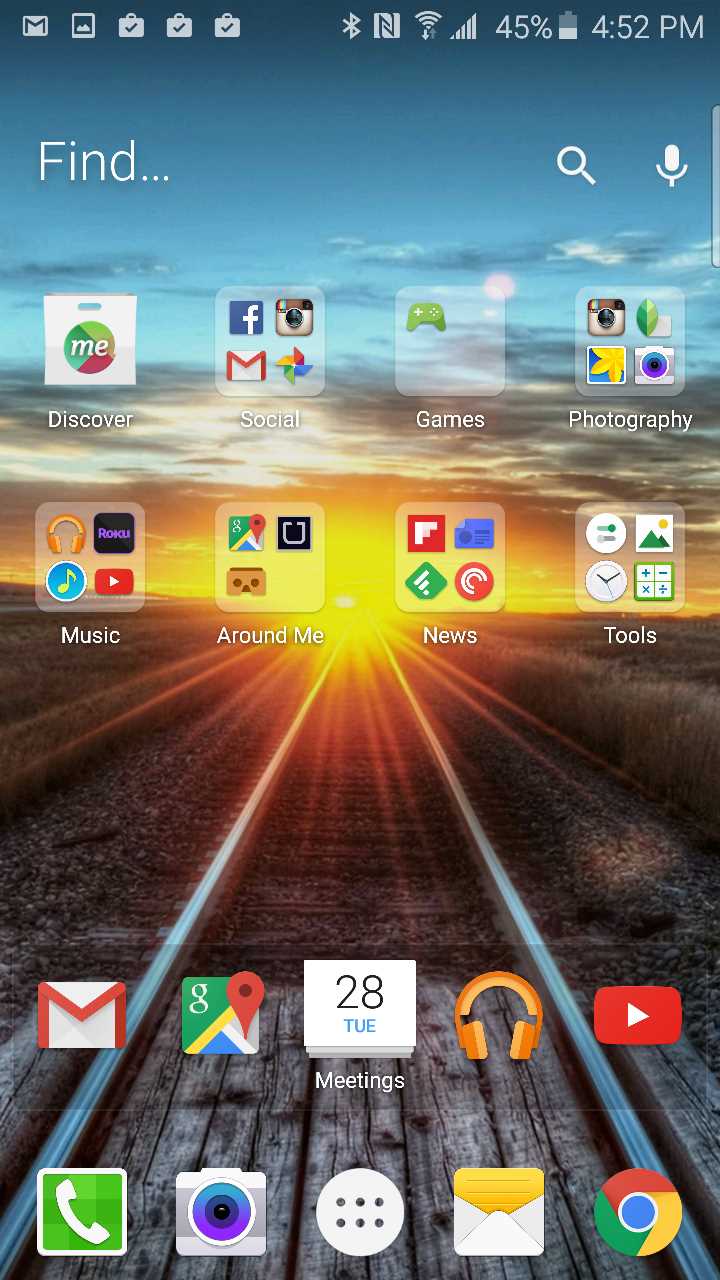 EverythingMe organizes apps for the user so they don’t need to spend hours doing it.

The row of apps above the dock shows apps most often used. The folders in the middle show apps collected by the launcher based on category. 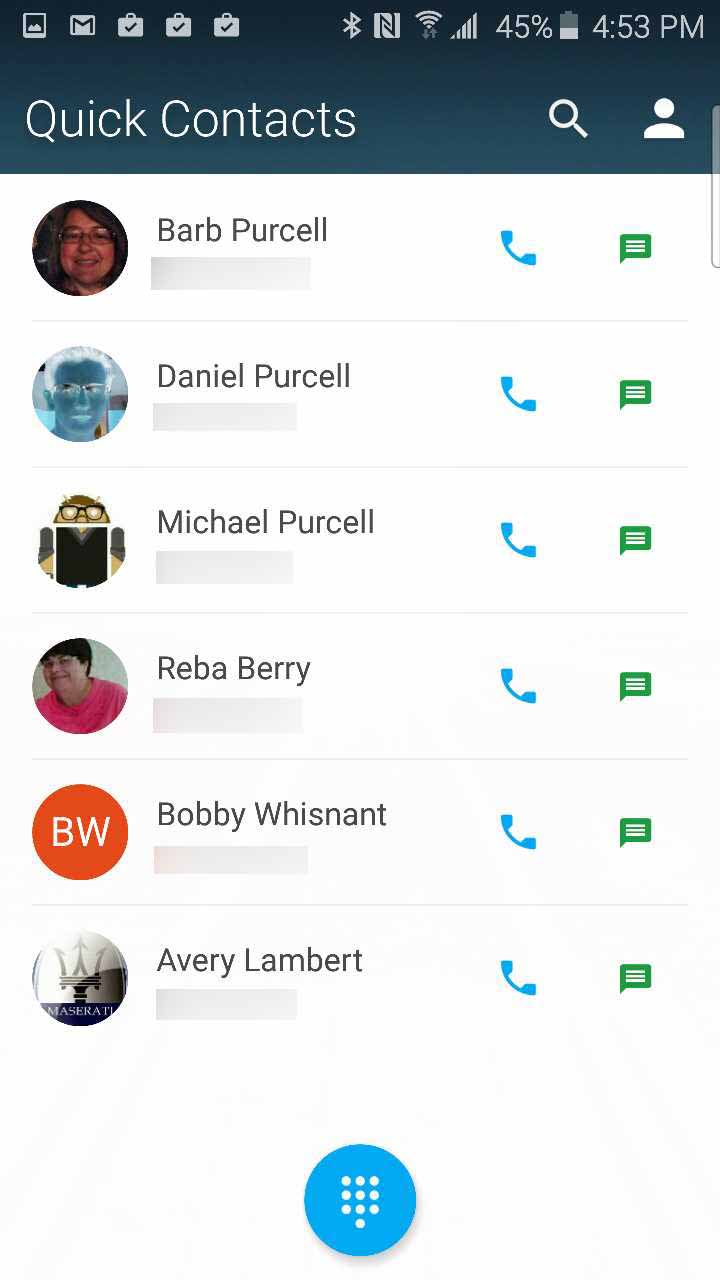 EverythingMe Quick Contacts shows the people the user communicates with most.

EverythingMe offers a user interface that’s organized automatically for the user. For example, the Quick Contacts screen shows the contacts the user communicates with most. At the bottom of the screen there’s a dialer button so the user can call anyone.

Tap and hold the home screen to customize the launcher. There are options for the look of folders, icons, wallpaper and the number of rows and columns. The launcher will also let users add more smart folders, which collects apps into folders based on their Play Store category.

Google offers the Google Now Launcher so phones that don’t run a pure Android experience can get close to it. Add the Google Keyboard to make it even more Googley. 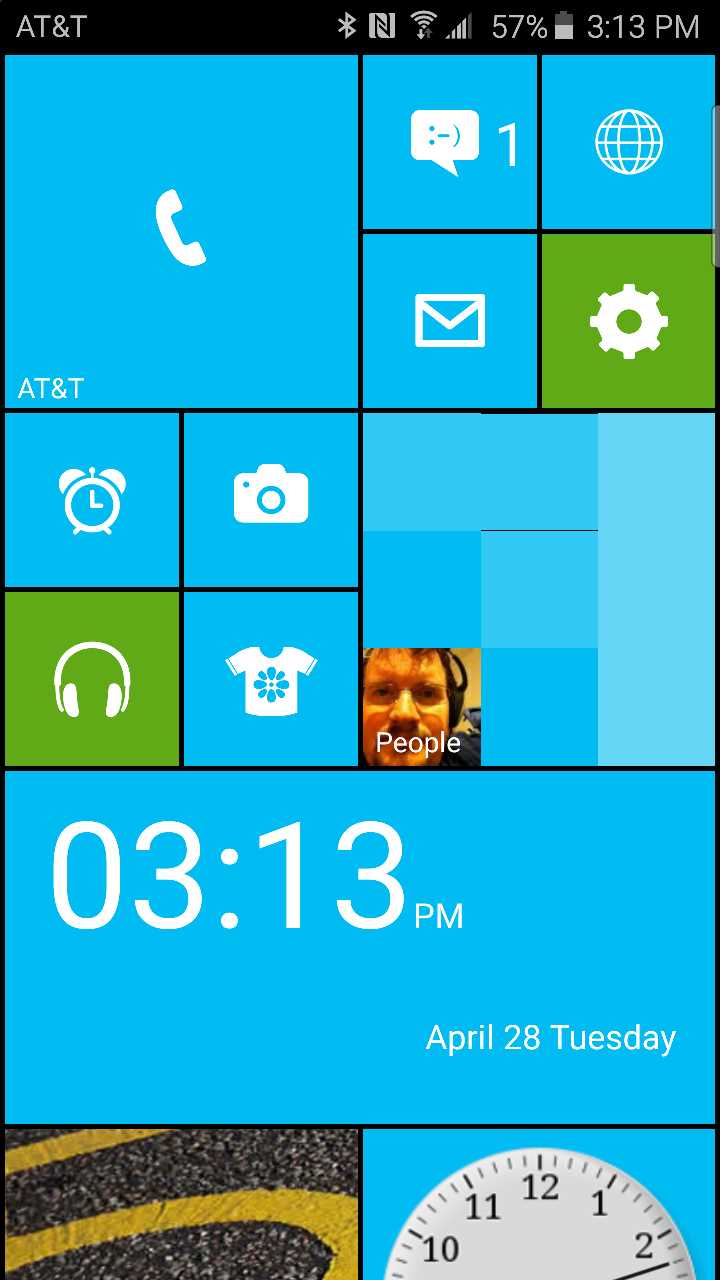 Launcher 8 will put a Windows Phone-style launcher on an Android phone.

Plenty of people try Windows Phone and like the user interface but hate the app selection. With Launcher 8 (Free) those people can get the Windows Phone experience plus the Google Play Store app selection. The launcher places tiles on the home screen that represent Android apps. Some of them even give us the live tile experience of Windows Phone 8 with the icon showing things like photos or contact pictures in a slide show. The calendar tile shows appointments. 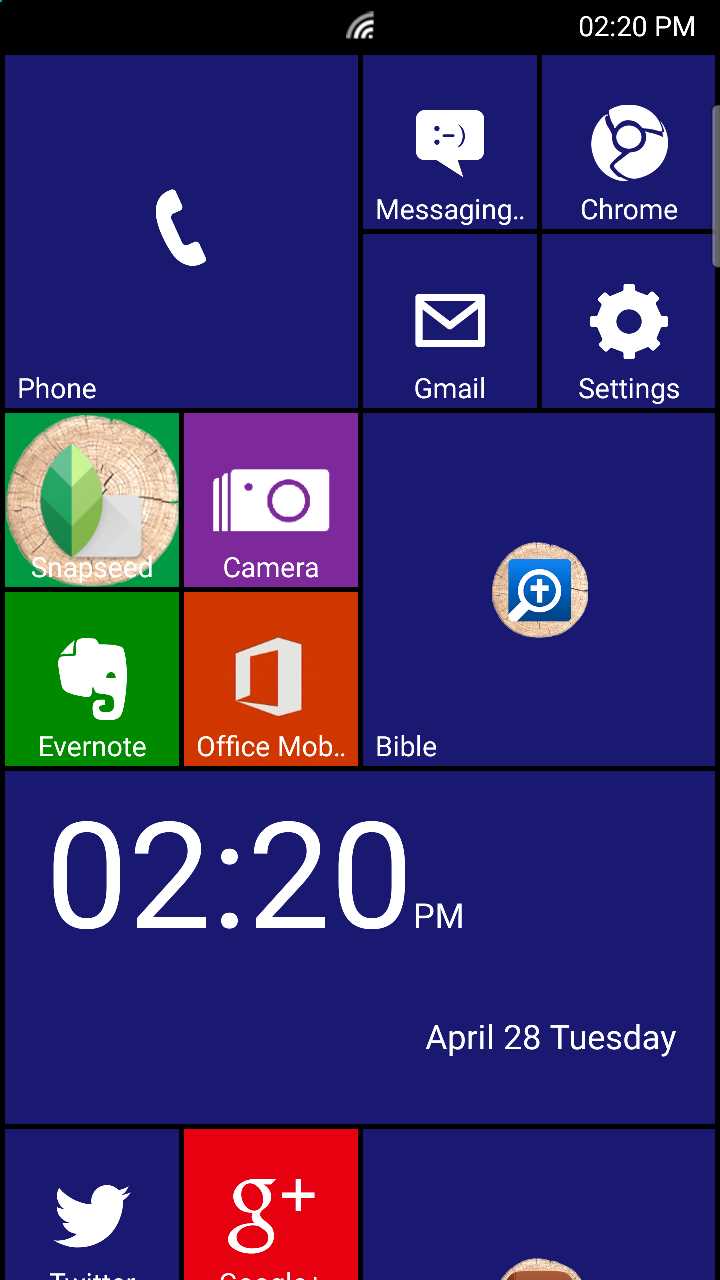 Other Launcher 8 themes are available from the free theme store.

Customization gets difficult, but once the user figures out how it works, it’s a nice customizable interface. The app drawer shows up when the user swipes in from the right side of the screen. Get to the settings window by swiping in from the left. Add things to the home screen like apps, shortcuts to things like files or contacts, and even Android widgets. There’s also a healthy theme collection to customize the look of Launcher 8. 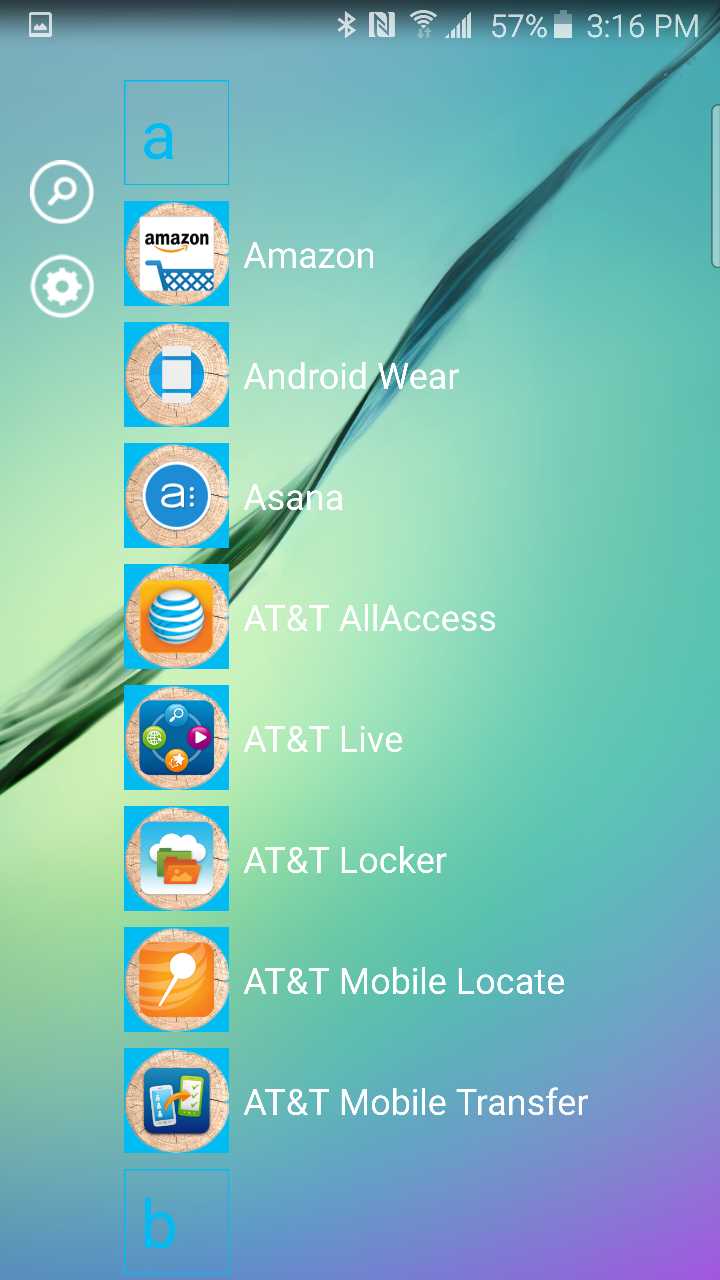 Access all apps installed by swiping in from the right edge of the screen.

Nova Launcher (Best of the Group) 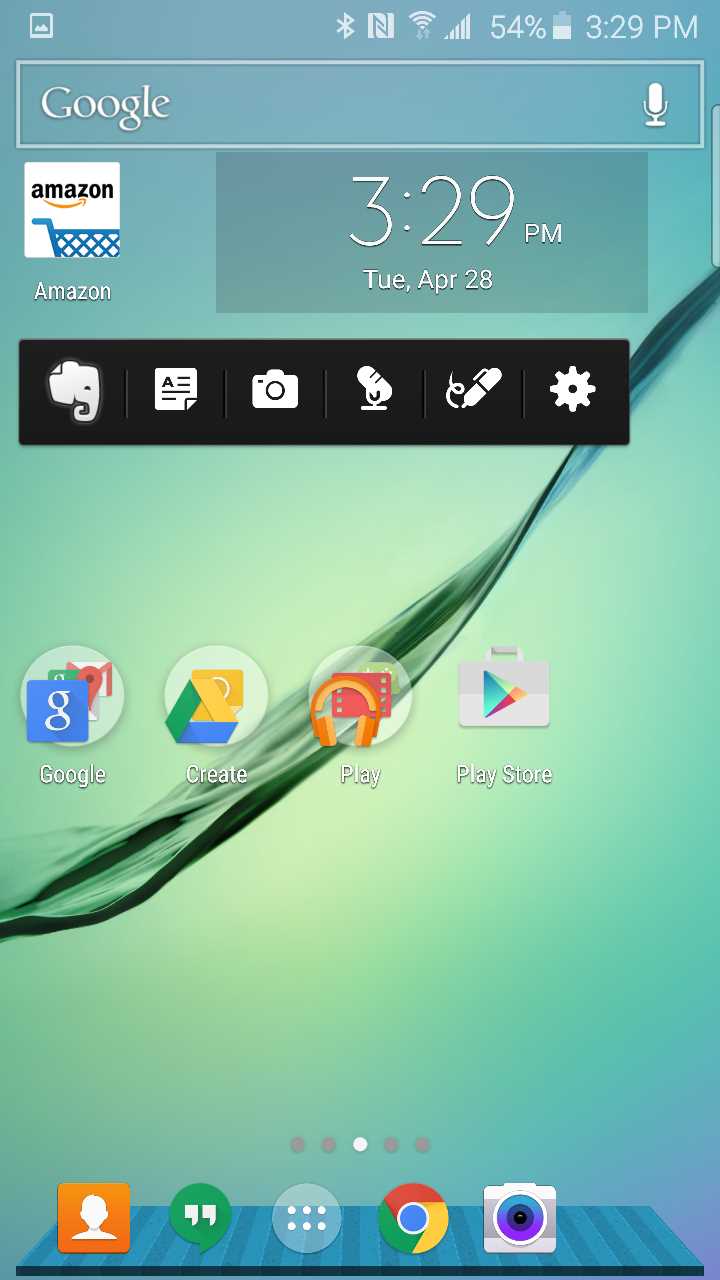 Nova Launcher (Free) wins the “Best of the Bunch” award in this group of ten launchers. It gives us the simplest user interface with plenty of attractive customizations available. Nova Launcher is the tinkering user’s dream. One can increase the number of apps on the screen from the phone’s default to up to 12×12, although that won’t make it very usable. Using a 7×6 grid seems to work well on the Samsung Galaxy Note 4. There are so many settings the user can change that it can get overwhelming. However, using it in defaults works well too.

Tap and hold a widget on the Nova Launcher home screen and tap Resize to change the size of the widget.

The user can not only change the icon/widget grid size, but the look of app folders, the dock and more. It also changes the way the user moves between screens and what the animation looks like as it switches.

Once the user places a new app or widget, they can tap and hold it to re-size it. This works great for some widgets, like the Evernote 4×1 widget. Widen it and get 5 or 6 widget icons on it so that the user can use Evernote tools with a single tap. Quickly create a photo note, voice note or drawing note plus other Evernote kinds of notes. 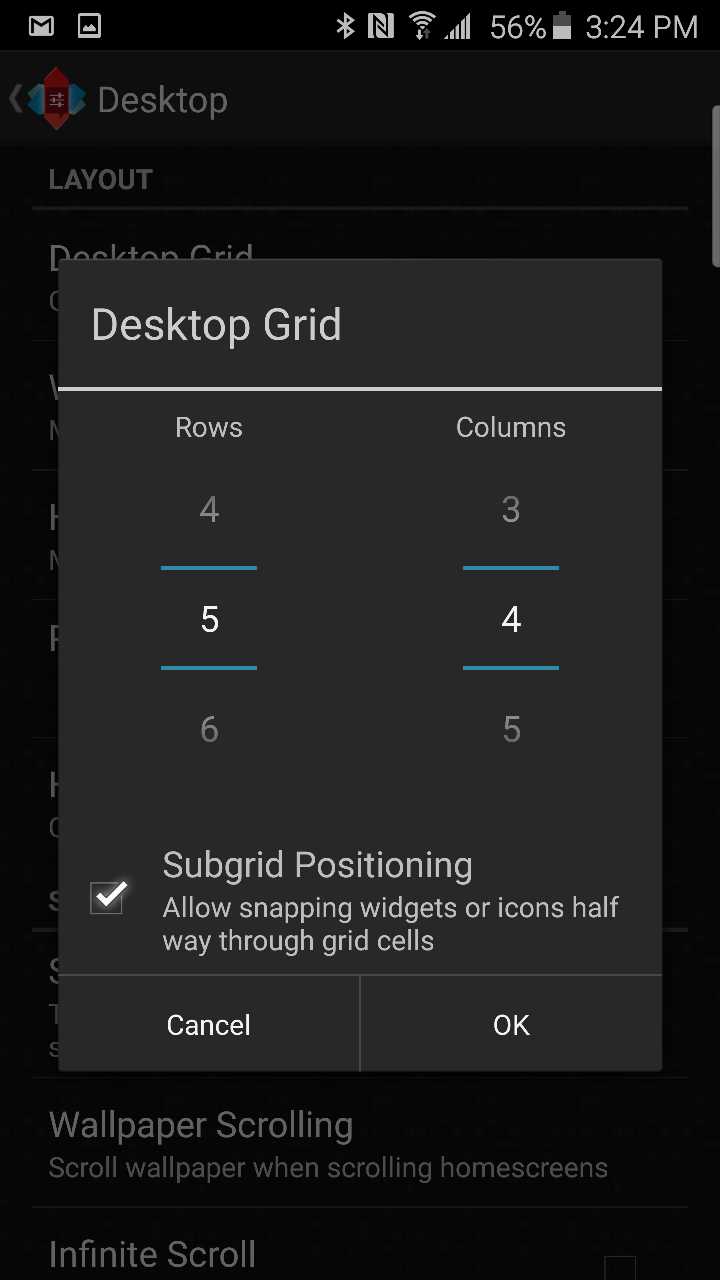 I love that you can change the number of icons on the home screen.

The $4 Nova Launcher Prime adds more. Gestures launch some of the Nova Actions, things Nova can do with a swipe or a tap when the user puts an action on the home screen in the free version. The Prime version also will hide unused apps in the app drawer.

Many owners of the Samsung Galaxy Note 4 don’t know that there are two versions of Touchwiz installed. Go into the Settings and find Application. Then tap on Default Applications and choose the Home screen setting. Pick Touchwiz Easy to use it. 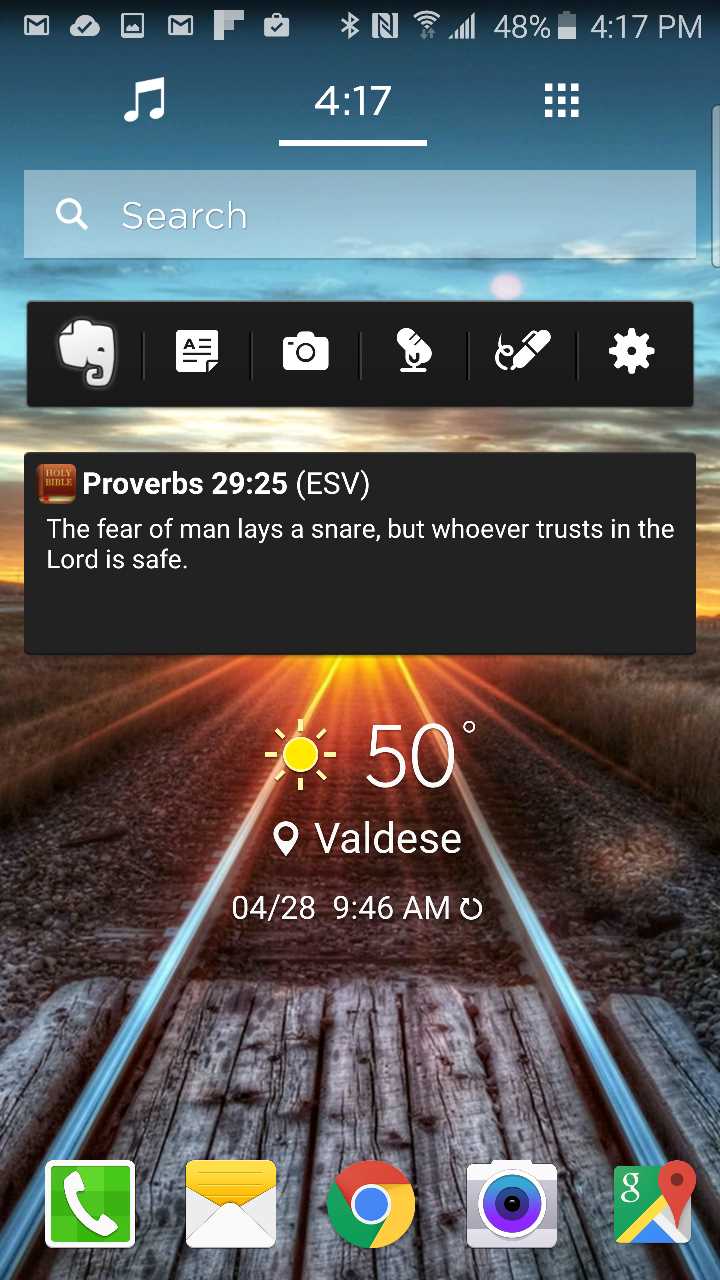 Tap and hold on the home screen to customize widgets or the wallpaper.

Yahoo Aviate Launcher (Free) does the arranging of apps and app folders for you, but also asks the user what apps they use the most. Then it offers some beautiful wallpapers. The launcher shows five screens. The main screen will offer the time, an app drawer icon, the dock and a beautiful wallpaper to name a few things. Swipe left one screen to see Yahoo weather and news or other Spaces the user adds. Swipe again to see spaces, which correlate to the way someone might use their phone. It has spaces for music, work and other things. Use this to add more to the previous screen.

From the main home screen, instead of swiping to the left, swipe right to see the apps installed collected into groups for social apps, productivity, entertainment and more. To see every app, swipe right one more time. They’re all listed alphabetically with a search button to find an app quickly. 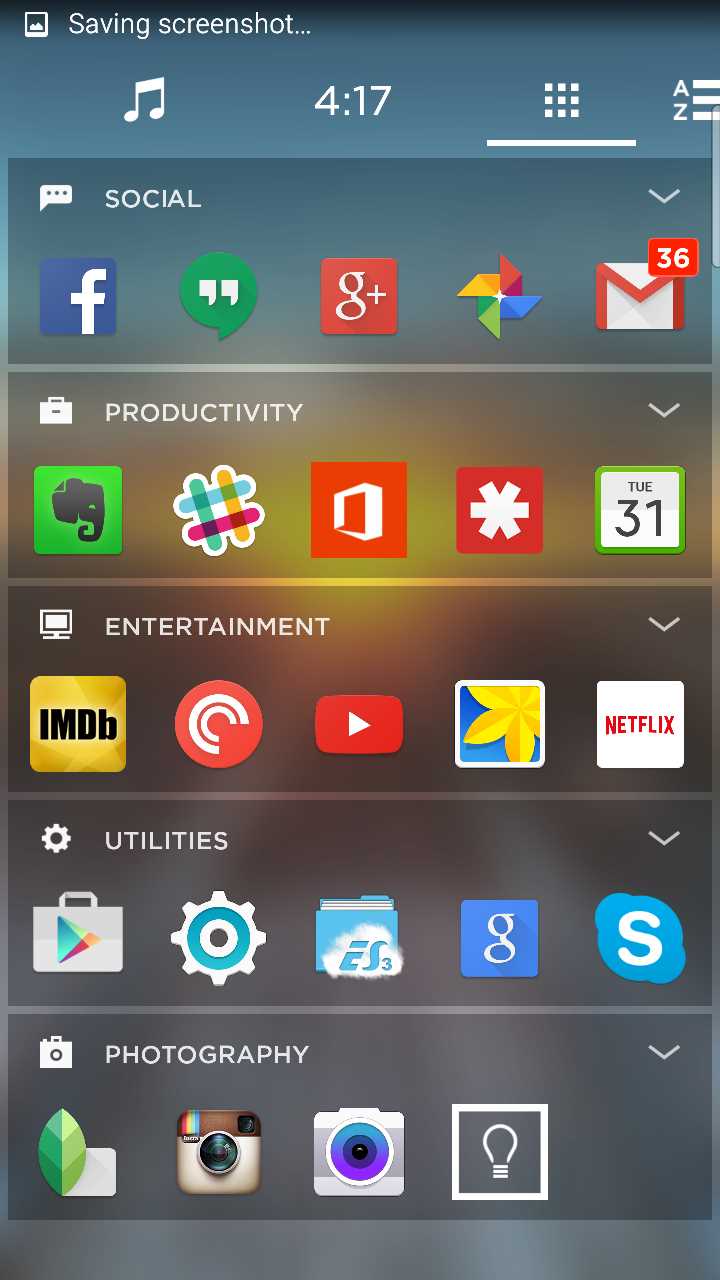 Yahoo Aviate organizes apps into collections. Get to this screen by swiping from the right side of the screen once.

Add your widgets the main center home screen. Tap and hold to see available widgets or to change the wallpaper. The launcher offers a large collection of professional photos or the user can pick their own images. 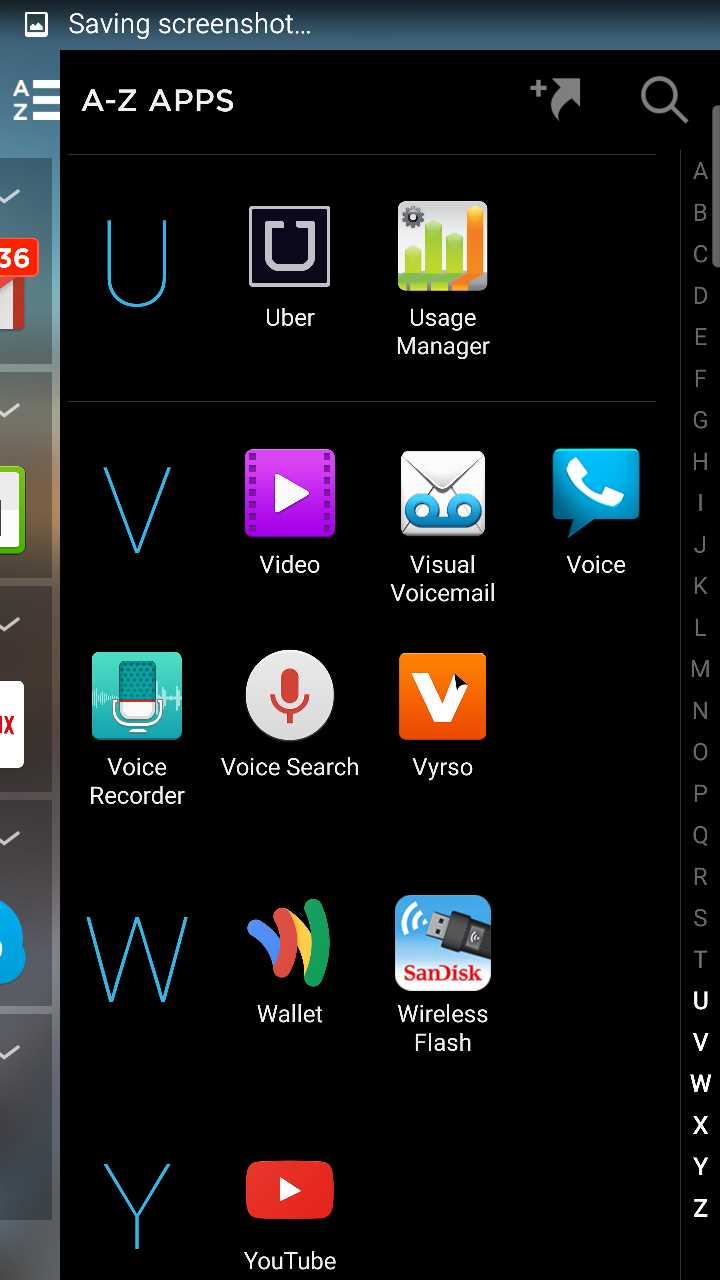 Swipe from the right side of the screen twice to get to the app list.

Users can add collections of apps or spaces from each of those screens. 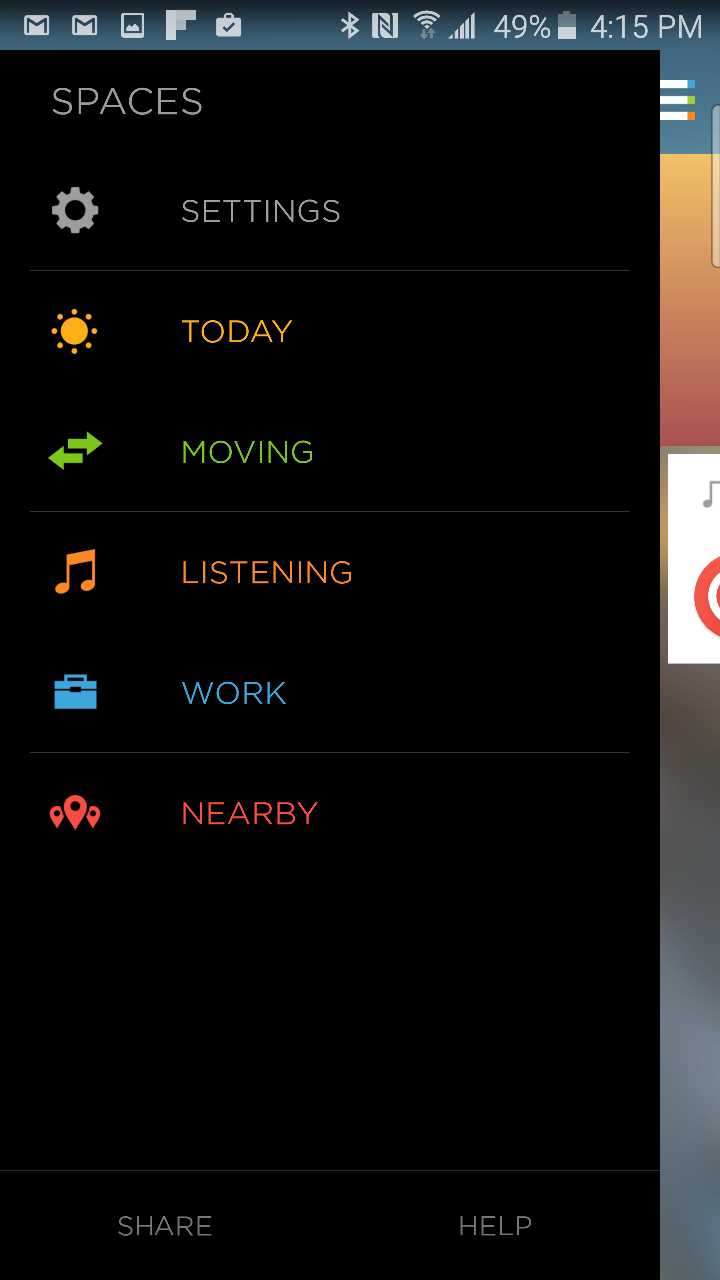 Swipe from the left edge twice to select the Space you want to use. Spaces are app groups based on use, like listening or work. 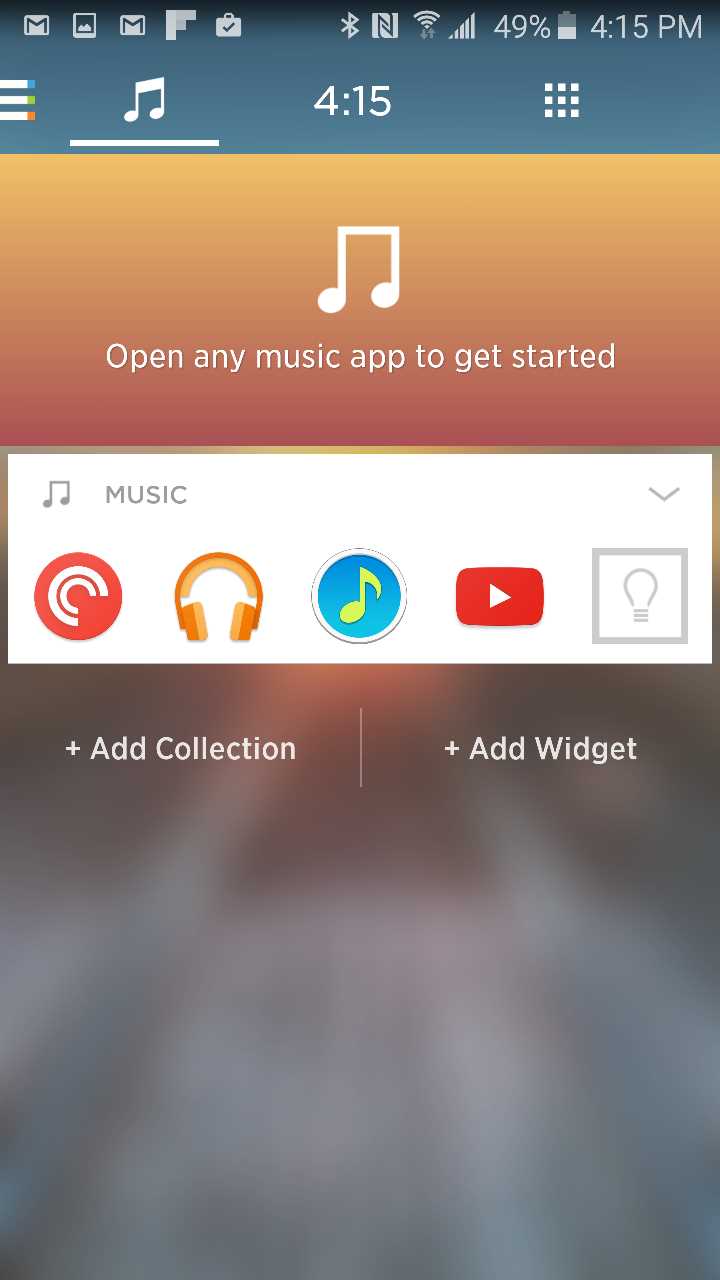 Here’s the listening space in Aviate Launcher. The user can tap and hold to add widgets for listening here.

To add content to the screen, tap Add Collection to put another of the collections in the screen to the left. Add widgets as well by taping Add Widget.

How to Go Back to Touchwiz

Go back to Touchwiz if you don’t like any of these new launchers. Open Settings by swiping down from the top of the screen on the Samsung Galaxy Note 4. Top on the Settings icon in the upper right corner and find the Applications section. In that section tap on Default Applications and find the launcher setting. Pick Touchwiz here. This sets Touchwiz as the default launcher.