For several weeks now, Samsung and its carriers have been pushing out Android 4.3 Jelly Bean updates for the Samsung Galaxy S3 and the Samsung Galaxy Note 2. The roll outs have been anything but smooth but from the looks of things, they will be coming to a close soon in the United States and elsewhere around the world. Here, ahead of their completion, we offer up five new and important details for Galaxy S3 and Galaxy Note 2.

Shortly after Samsung’s confirmation, the company began pushing out the Galaxy S4 Android 4.3 update, an update that surprisingly reached Sprint and Verizon in the United States at the end of October. Since then, we’ve seen the company push out several updates for the Galaxy S4, Galaxy S3 and the Galaxy Note 2. The update process though has been anything but transparent and smooth, however.

We saw Samsung shut down a Galaxy S3 update just a few days after it rolled out the update. We saw the AT&T and U.S. Cellular Galaxy S4 Android 4.3 updates stopped due to unannounced issues. And we have seen carriers in the United States remain mum about their Android 4.3 Jelly Bean release dates, a policy that continues to keep users in the dark.

From what we’ve seen and heard though, it appears that after all of these troubles, Samsung is finally close to finishing these roll outs in most places, including the United States. In the past few days, we’ve seen a number of developments and here, we take a look at five new Android 4.3 Jelly Bean update details for Galaxy S3 and Galaxy Note 2 users. 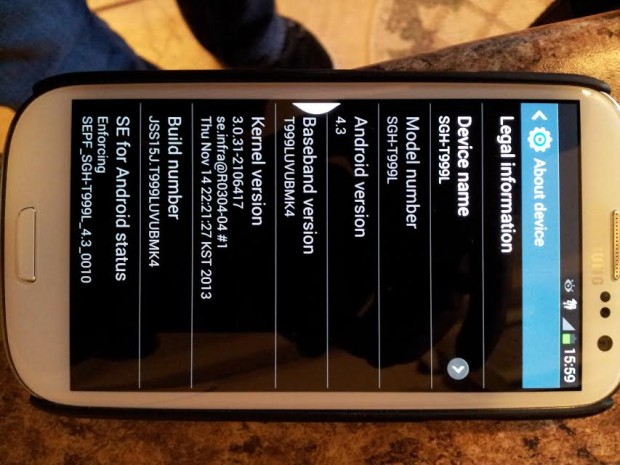 The carrier revealed the update’s roll out through the carrier support page and it is currently available through Samsung Kies and via an Over-the-Air upgrade. Typically, T-Mobile updates take a week or more to complete so it could be a few days before some Galaxy S3 LTE owners on T-Mobile receive their upgrade to Android 4.3 with Samsung KNOX and Galaxy Gear support on board.

Verizon users became hopeful when the carrier was first to the Moto X and Galaxy S4 Android 4.3 updates but it has seemingly reverted back to its old ways with this update. Remember, Verizon utilizes extensive testing so it could be that the carrier is simply trying to work out the kinks inside the software. Don’t expect it to work them all out, however.

Now that’s the last major update but it’s not the last Android 4.3 update in the United States. Regional carrier C Spire has quietly confirmed its intentions on Facebook though it does not say when the Android 4.3 update will roll out, only that the roll out is coming in waves. Typically, it’s at least a few weeks behind the big boys. Other carriers with the Galaxy S3 should also upgrade to Android 4.3 but don’t expect the updates to be timely.

Yesterday, T-Mobile began rolling out the Android 4.3 Jelly Bean update to its Galaxy Note 2. The update followed in the footsteps of the Sprint Galaxy Note 2 Android 4.3 update and the U.S. Cellular Galaxy Note 2 update, the latter of which quietly rolled out last week to little fanfare.

We’ve heard from one AT&T Galaxy Note 2 owner who pointed the mistake out to AT&T customer service representatives. He has claimed two things, neither of which we can verify but will put forth here since we find him to be credible. Originally, he says, AT&T reps told him the software would be out in early December, the first week to be exact. Now, he says, the update that was once in CSR’s systems, has vanished completely and they are not certain of an ETA.

Timing for Other Regions Remains Static

The good thing is that we aren’t seeing any delays impact other carriers around the globe. One carrier that we’ve been monitoring is Australian carrier Telstra. The carrier’s open communication about these updates leads to insight that can be found at no other carrier.

We also haven’t seen any significant delays at other carriers. French carrier SFR, which also is vocal about the timing for updates, hasn’t suggested that it will be delayed beyond December, a good sign for customers there.

So, right now, December seems like its going to be the final push for Galaxy Note 2 Android 4.3 updates around the globe.

Finally, we are seeing Galaxy Android 4.3 update problems persist in the days and weeks after the roll outs. We’ve already reported on a few of the issues plaguing Galaxy S3, Galaxy S4 and Galaxy Note 2 users on AT&T, Sprint, and Verizon  and unfortunately, we aren’t seeing complaints mellow out as the dust around these updates settles.

While Samsung UK recently pushed out another Android 4.3 update aimed at fixing the major issues on board its variants of the Galaxy S3, U.S. users probably won’t be as lucky. There is nothing out there that suggests that these devices will receive Android 4.3 bug fix updates in the near future, which means that users are likely going to have to tough it out.