Since I first saw Dick Tracy use his famous communication watch I’ve wanted a connected watch. While the smartphone has taken away my need for a watch on a day to day basis there are some smart watches which might change this.

These watches range from connected watches to designer iPod watches with color touchscreens, but they all have one thing in common — they do more than tell you what time it is.

For now, you don’t have a huge selection of smart watches, but we have picked the 5 coolest connected watches to help you stay connected without looking at your smartphone. 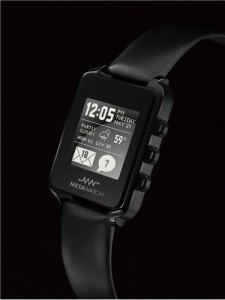 Instead of delivering a PDA on your wrist, the Metawatch connects to your smartphone to deliver bits of information that help you figure out if you should take your phone out of your pocket for a full smartphone experience.

I think this one has a chance because there are many times where we check our phones, just to see if we have a new email. This way, a glance at my wrist will tell me if I need to take my phone out of my pocket.

The Metawatch is in beta right now, but you can purchase a development watch in analog or digital faces from Texas Instruments. Look out for Fossil branded smart watches on store shelves soon.

Sony is also a player in connected and wearable displays. The company’s LiveView watch and remote control for smartphones will connect wirelessly to your smartphone to provide updates on important information.

In addition to the connectivity, this watch runs Android 2.0 and includes the ability to install compatible apps from the Android market.

The 1.3″ display shows social network updates, incoming texts, phone number of incoming calls with the ability to mute ringer, reminders and music controls over Bluetooth. You can purchase the LiveView from Sony UK. 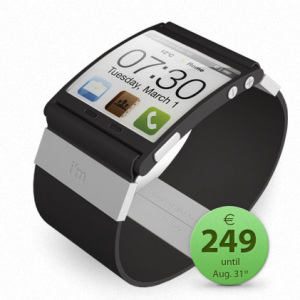 This smart watch is pretty pricey, with options up to $21,000 depending on your choice of materials and bling.

The im’ watch runs Android 1.6 and connects to the iPhone, Android, BlackBerry and Windows Phone 7 devices; communicating over bluetooth with your smartphone.

This watch is interesting, but not necessarily the hottest watch in the pack. You do get access to apps like weather, stocks, appointments, calls, message preview, email and other notifications.

I’m not sure I’d pay the entry-level price, let alone the high-end designer white gold with diamonds version, that retails for over $21,000. 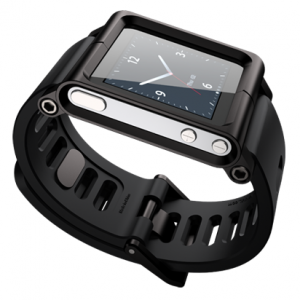 Apple hasn’t officially made a smart watch, though it would be exciting to see what Cupertino came up with. Instead, we have the multitouch iPod Nano.

Apple’s smallest MP3 player has a clock app built-in and access to photos, music, FM radio,  timer, pedometer and a few other functions. Unfortunately, Apple hasn’t opened up the Nano for apps, which could really make this an amazing watch to wear.

If you want to use the iPod Nano as a watch, you’ll need to spring for a watch band to make this happen. You can check out our review of the Lunatik iPod Nano watchband, to see if this is the watch for you. 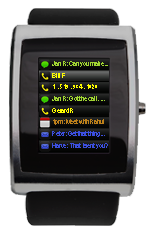 Fear not Blackberry owners. There is a smartwatch designed to work exclusively with your smartphone platform of choice.

The BlackBerry InPulse smartwatch delivers the following functionality to your wrist;

The BlackBerry watch can also connect wirelessly to Android smartphones and to laptops running OSX, Windows or Ubuntu.

This watch allows you to “hack” your own watch. Use the SDK from InPulse to create your own watch apps. InPulse says this is easy, but I’m guessing most users would rather buy an app for 99 cents than learn to make their own app.

Smart watches are still out there in terms of fashion and tech, but the advances made in just the past year are promising for those of us who want wearable smart devices. Once Fossil enters the market, we may even see some decent looking smart watches.