As the NFL is “back to football” fantasy league fans will be drafting their teams and planning for the 2011 championship run.

Your android phone or tablet can be used to manage your team, which is a big benefit over the competition that might be tied to a laptop or desktop system to make last-minute changes to the team after learning that the starting QB has an injury.

Check out out  top picks for managing your fantasy football team from your Android device.

Use Your League Site’s App

If you use NFL.com or Yahoo’s Fantasy Football site to manage your league, then you should definitely get that site’s app.

NFL.com produced an Android app that you can use to join a league already set up or start your own. Once you set up or join the league use it to rank your players for the draft and then change your lineup each week. As the teams play Sunday, keep track of your player stats in real-time.

If you use Yahoo Fantasy Football, then get their app. It handles all that the NFL.com app does. ESPN has a league as well. All three of them are free to download from the Android Market. Lesser known online leagues might also have an app so search for your site’s name in the Android Market.

Once you snag your site’s app, then get one of these apps or all of them for keeping track of which players to play, who to pick up as a free agent or who to drop from your team.

Aside from having a terrible app icon (see right) My Fantasy Football Guru helps you learn about player news as it happens with live, in-game alerts sent to your Android phone. If you play in a league that allows in-game player changes, this can really help.

Aside from that, it alerts you to injury news and gives general advice for putting the best team together to play so well in your league that you will start “Battles between friends, in-laws, roommates, co-workers, co-coaches, and strangers” (taken from their app description).

NFL Fantasy Cheat Sheet gives you information about various players and recommends the best picks for your fantasy league. Some leagues ask you to pick an individual defensive player and this app provides info on defensive players, something not all apps do.

The app projects which players will be the best at the end of the year, which helps you decide between players to possibly pick up in your draft or free agency during the season. The app will cost you $2.99, but it is highly rated on the Android Market and on the iOS App Store.

Watching Games on the Go Via NFL Sunday Ticket To Go

Of course you will be watching your players and the best way to watch a lot of NFL games on Sunday comes from DirecTV. You will have to pay through the nose for the privilege since it costs nearly $400, but having all those games available makes Sunday awesome for the hard-core football fan. The Red Zone channel shows no commercials and cuts live to games when one team is in scoring position or shows highlights of turnovers right after they happen.

Too bad you find yourself away from the TV on some Sundays. NFL Sunday Ticket To Go takes care of this problem by providing mobile apps that stream the games. You used to need an iOS device to enjoy it, but this year DirecTV added Android support. The app gives live game scoring and streams the games to your Android phone or tablet so long as you are not also watching a game at home. 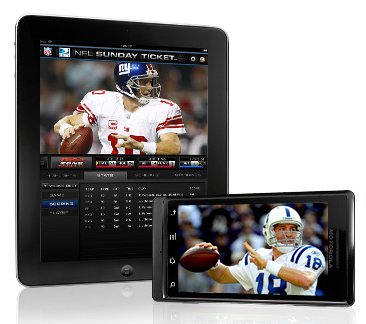