6 Things You Can Do with Microsoft Office for iPhone

Microsoft just updated Office on the iPhone, breaking out three separate apps (Microsoft Word, Excel and PowerPoint) from the single Office 365 app that Microsoft released before. These stand alone apps are now available with Outlook, OneDrive and OneNote, which were already available as stand alone apps before this update.

We’re going to show you six useful things you can do with Microsoft Office for iPhone. Before going any further, see how to get Office set up on your iPhone.

The new apps present a nice option for those who want to do some quick edits of a Word document, present using an iPhone mirrored through an Apple TV hooked up to a display, or track some figures in a spreadsheet, all while on the go. The apps will surprise users with all that the person can do. 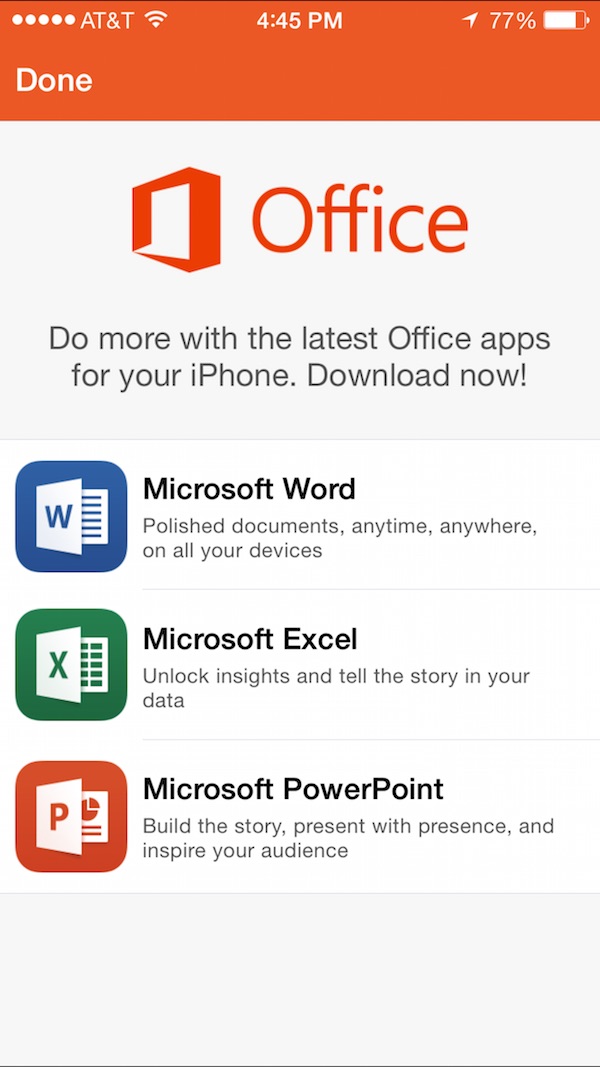 The 6 tips below will make Office for iPhone users more productive.

Microsoft added support for Dropbox sync. Despite giving away unlimited OneDrive (formerly SkyDrive) storage to Office 365 subscribers, they finally admitted that more people use Dropbox to sync than OneDrive. Dropbox sync will draw more users over who are entrenched in Dropbox with all of their computers, devices and files. 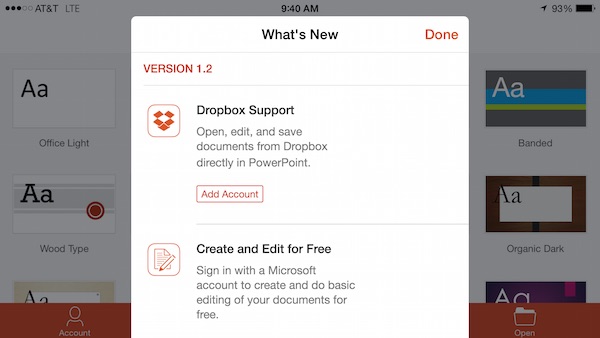 New features in PowerPoint for iPhone including syncing with Dropbox.

To add Dropbox, install the new Word, PowerPoint or Excel and the introductory screens will let users connect to a Dropbox account. From the “What’s New” screen tap on Add Account, the first item from the list of new features.  The Dropbox app will open and ask for permission to let the app access Dropbox. 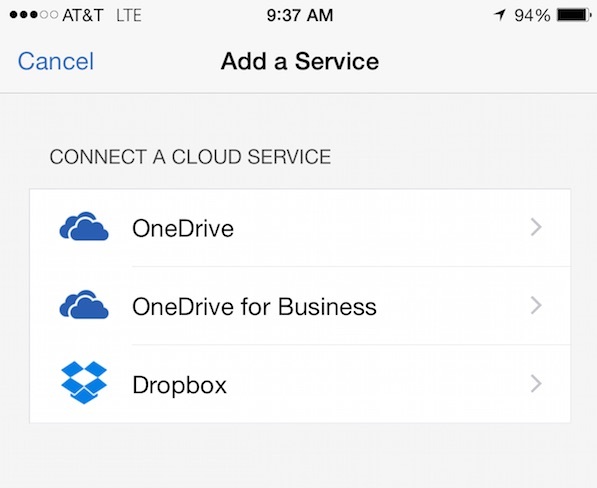 For those who already installed the Office apps without connecting them to Dropbox, tap on the Account tab at the bottom of the main screen. Tap on Add a Service and then Dropbox. Like the first method, the Office app will open Dropbox and ask for permission to connect the Dropbox account.

Highlight or Point to Slide Content in PowerPoint for iPhone 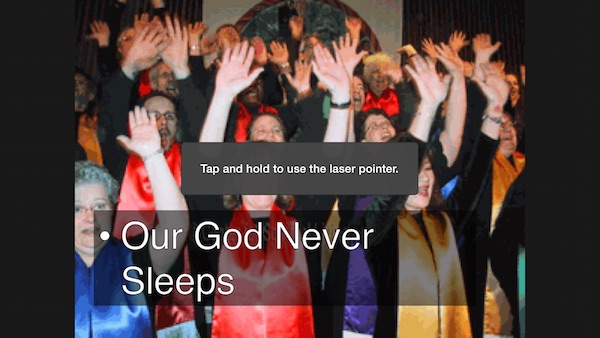 While playing a presentation start the virtual laser point by tapping and holding on the screen. Move the highlighter to the item you want to call attention to.

While sharing a presentation on an iPhone using the new PowerPoint for iPhone, speakers can point to onscreen content with a virtual laser pointer. This lets users replace their physical laser pointer with a virtual one. While the iPad version included this feature, presenters can now also use an onscreen highlighter with multiple pen styles and colors. 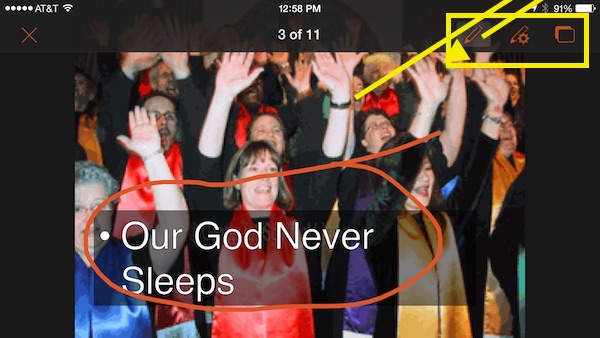 To use a highlighter, slide down from the top of the screen while displaying a presentation. A toolbar appears. The first icon turns on the default highlighter. The second icon opens the screen below to configure the pens/highlighters. The third button blanks the screen to use it as a blackboard. 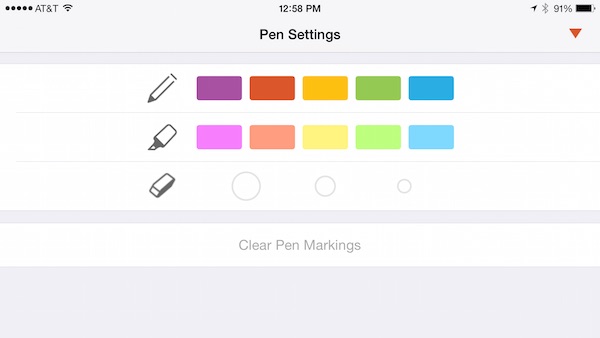 Use the highlighter pens by tapping on the pen icon on the toolbar of the screen while showing a presentation in PowerPoint for iPhone. Show the toolbar by sliding down from the top of the PowerPoint slide.

This configuration screen lets users choose between a marker (top row), a highlighter (middle row) or an eraser (bottom row). The user can also clear all pen markings with the bottom button. Tap the small downward-pointing triangle in the upper right to return to the slide. 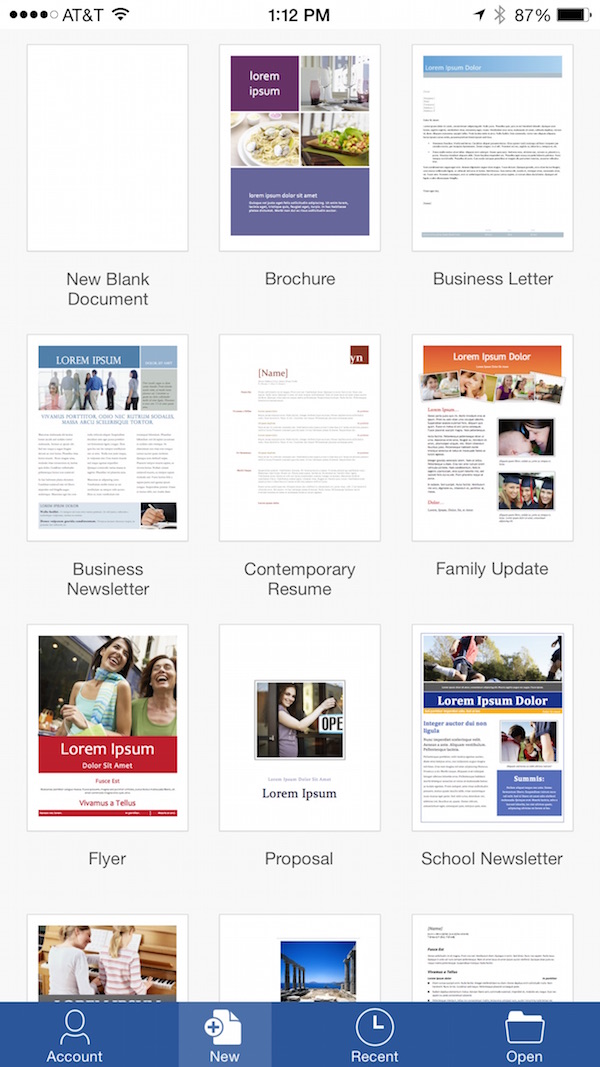 Word for iPhone offers some nice templates. A user can create a résumé, newsletter, class notes, outlines, or even a research paper.

To open the templates in Word for iPhone tap on the New button along the bottom of the screen. It shows all the default templates. The one users will take advantage of most is the New Blank Document template. The other templates show various kinds of layouts as mentioned above. Tap them to open one and begin editing.

Finish Work Started on a Computer

All three Office for iPhone apps include syncing with OneDrive online. People who use Office 2013 for Windows can easily open files they’ve worked on while using their computer. Any file saved from a Windows version of Office will show up in the Recent window. 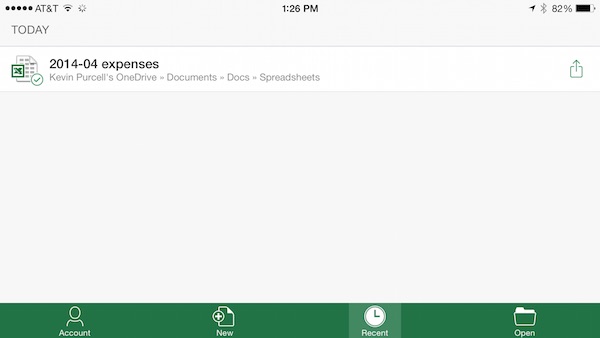 Windows users can save their files and then go to the iPhone and open the Office app. For example, open Excel and tap on the Recent tab at the bottom of the screen. The app lists all the files that the iPhone app or the desktop program recently opened and edited. Find a recent file and tap it to open it and start editing it.

Share files using the same steps above to show recent files. Instead of tapping the file name, tap on the Share icon at the right end next to the file name. It looks like a box with an up arrow. A menu appears with a bunch of options. Tap the second one that reads Share with the arrow pointing to the right. 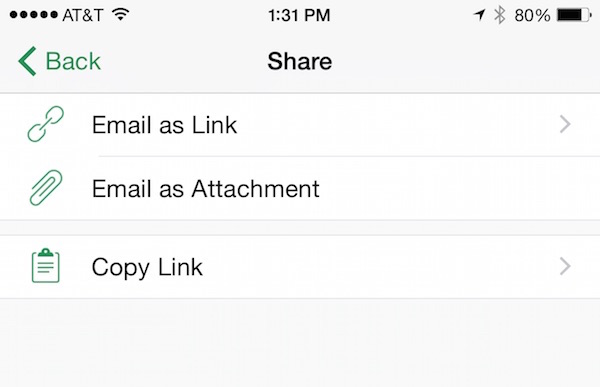 To share files tap the share button to the right of the file and choose the sharing option.

Office for iPhone apps will share the file using one of three options. The user can email a link to the file, the best option for large files like big PowerPoint or Excel files or for Word files with a lot of media. The second option attaches the file to an email and sends it directly. Use this for smaller files. Third, copy a link to the file. Use this to share it using something other than email, like Facebook or posting a link in a blog post.

Use Word Ribbons to Work with Documents

Tap on the formatting icon which looks like a pen on top of the letter A.

One might expect that a document created on the iPhone could only include simple text in paragraphs, but that’s not true. Open a document or create a new one, and then tap on the formatting button in the toolbar. It looks like a pen resting on top of the letter A (see above). This shows  the formatting screen at the bottom of the screen (see below). 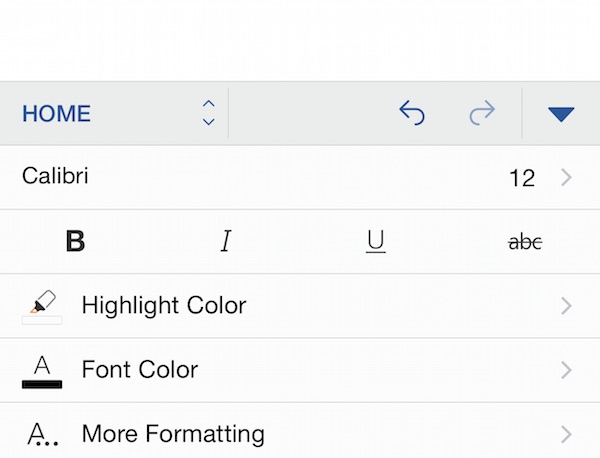 The formatting screen includes a button that shows the different ribbons that we’re used to seeing on the desktop. Tap on HOME with the up/down arrow at the top left of the formatting window which appears at the bottom of the screen. We also get undo and redo buttons and the down arrow, which hides the window.

Each Ribbon screen handles the same kinds of the things that those ribbon tabs handle on the computer version of Word. There’s Home, Insert, Layout, Review and View tabs. After first installing Word, play around with the various functions of each ribbon to test them out. Some of the best functions include …