7-Inch Galaxy Tab Plus Headed to T-Mobile, But What's New?

T-Mobile USA may be getting a refreshed version of the Galaxy Tab 7-inch that was launched last year. The mobile tablet–which fits inside a jacket pocket or purse–will get a ‘Plus’ moniker added to its Tab name, and according to TmoNews, while being able to support T-Mobile’s 4G HSPA+ wireless network. It’s unclear if the late-launching Galaxy Tab Plus this year will support the carrier’s 21 Mbps HSPA+ 4G or the faster 42 Mbps 4G download speeds, however.

Early leaked screenshots suggest that Samsung’s new Tab effort would utilize the tablet build of Android in the form of Android 3.2 Honeycomb, which would be optimized for the smaller resolution of 7-inch screens. Exact resolution is unconfirmed, but the original 7-inch Tab launched with a display resolution of 1,024 X 600 pixels; Samsung’s larger 10.1-inch Tab has a pixel count of 1,280 X 800 pixels, for comparison.

In addition to Android 3.2 Honeycomb, it appears that the Tab Plus will also come with Sasmung’s TouchWiz UI overlay. 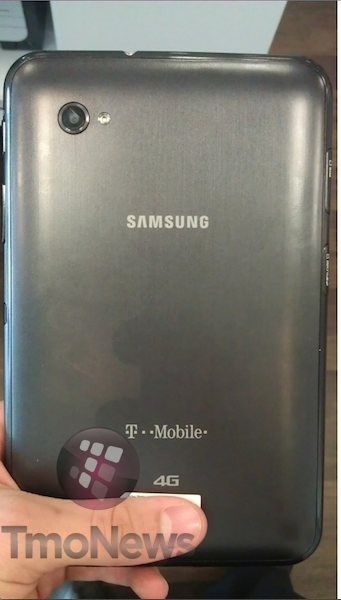 The design of the Tab Plus appears slightly different than the Galaxy Tab 7.7 that was first introduced at the German IFA trade show. That model was subsequently yanked from the show floor following court orders in the ongoing legal dispute between Samsung and Apple. It’s unclear if the Tab Plus was re-tooled following that incident.

In the U.S., T-Mobile has been rumored to be bringing a Samsung tablet product to its lineup, and the Galaxy Tab Plus may be that product.