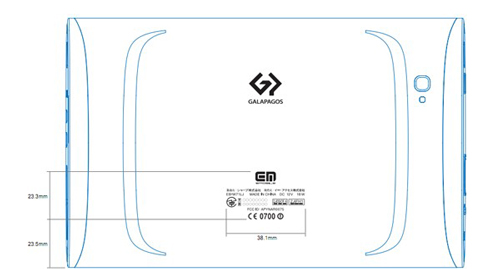 It looks like Sharp may be readying a 7-inch Android tablet under its Galapagos brand name. The 7-inch model would sit in the middle of Sharp’s other tablets with a 5.5- and 10.8-inch displays. Not a lot of information is available at the FCC at this time, but it is now known that the Sharp 7-inch Android slate will come with a WiFi-radio.

As 3G/4G radio(s) are not mentioned at this stage, it seems unlikely that the Galapagos 7-inch would come with built-in mobile broadband, though Sharp can deliver such a model at a future launch. Launching initially with a WiFi-only model may be advantageous as it could keep costs low for more budget-conscious users in a competitive tablet ecosystem where the iPad is now dictating the price of the slate market. For comparison, when Android Honeycomb first debuted, it launched first on a 3G version of the Motorola Xoom, which is hardware-upgradable to 4G LTE at a later point for free, that costs $799. Though a cheaper WiFi-only version was later made available, an $800 tablet was seen as too expensive given the $500 entry point for the base 16 GB WiFi-only iPad.

The slate could potentially launch with Android 2.4, according to Electronista.

At CES, when I had taken a look at Sharp’s tablet range, it seems the company was positioning much of its tablets as e-readers, with access to content stores for newspapers, magazines, books, and journals. It’s unclear if the 7-inch model will launch in the U.S. market as FCC certification does not guarantee a product’s debut, but Sharp has in the past assured me that it will slowly begin to introduce some of its mobile products to the U.S., beginning with a 3D smartphone. However, to date, Sharp’s 3D phone still has not made it to U.S. soil yet.