Samsung announced the Samsung Galaxy Tab S to rejuvenate the Samsung tablet business and compete with the iPad. The press event focused on their updated Super AMOLED display technology. The Samsung tablets will come with 10.5-inch and 8.4-inch Super AMOLED displays and high resolutions that should make for bright, crisp images and text. Samsung also bragged about their media partnerships with Netflix, Flipboard and Condé Nast publishers.

The Tab S isn’t an iPad killer, but it looks like an attractive device that will compete with whatever Apple offers this fall. Here are eight ways the Samsung Galaxy Tab S might potentially attract would-be iPad buyers.

The two base configuration models of the Samsung Galaxy Tab S will cost the same as Apple’s tablets. Samsung’s 10.5-inch Wi-Fi model with 16GB of internal storage costs $500, the same as an iPad Air. The 8.4-inch Tab S with 16GB comes in at the same $400 price buyers pay for the iPad mini with Retina.

While it seems like both brands cost the same, an Android tablet offers something for that price that we don’t get on an iPad. Galaxy Tab S owners can add a micro-SD card with up to 128GB of space. The base models offer the same internal storage as iPad, but an iPad can’t add storage. Consider:

Samsung hit the sweet spot in screen sizes. Adding half an inch of screen size gives the user more room, but without making the Samsung much biggerr, or changing the way the user holds the device. With a 16×9 form factor, people will usually hold the Galaxy Tab S in widescreen mode anyways.

The 8.4-inch size on the smaller Tab S slims the width a little and gets taller, again for added benefit to the user. While those of us with big hands can hold an iPad mini with one hand between the thumb and finger tips, it’s not comfortable. Take half an inch off the size of the form like the smaller Samsung does, and it seems like it is going to fit better. 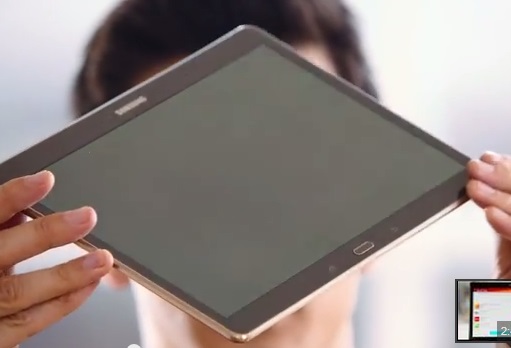 The Samsung Galaxy Tab S is thin and light making it a nice alternative to the iPad Air.

Samsung made a big deal over the display quality, spending a large part of their time on the color and brightness as well as the adaptive nature of the screen in different situations. They call it the “best mobile display” and we’ll see next month when they finally ship. However, with a 2560×1600 resolution, it seems likely to offer an extremely crisp display, making text and images really pop.

An incredibly high-resolution Super AMOLED Display may give Samsung a slight benefit over the iPad’s Retina Display. Active matrix optical light emitting diode (or AMOLED) technology takes less power to create the same picture. AMOLED screens typically suffer from a lack of brightness in direct light, but the Super AMOLED version from Samsung fixes this problem: it’s less reflective due to a narrower difference between the screen’s layer of glass above the LEDs. 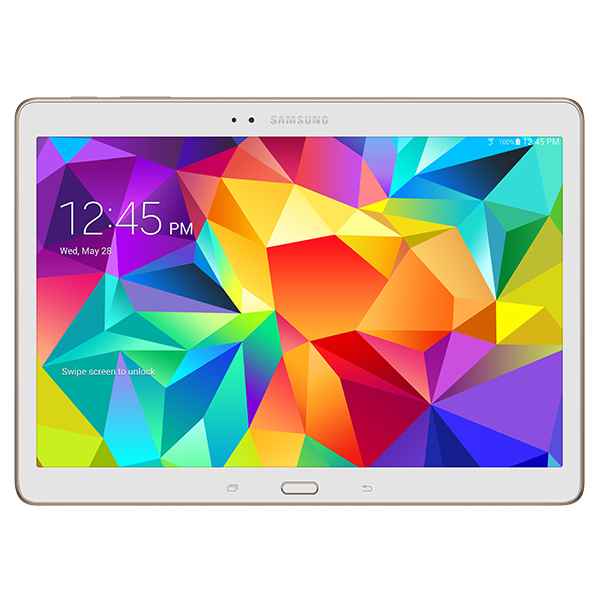 The Samsung Galaxy Tab S 10.5-inch gives just enough extra size to make it useful without being too big.

During the announcement, Samsung promised that the latest version of their Super AMOLED would work even better, as it adapts to the brightness of the user’s environment. For example, using a Samsung Galaxy Tab S at night in a darker room will use less light, saving more battery life. Viewing the display outdoors in direct sun will increase the brightness automatically to make it easier to see. If Samsung delivers on this promise, this could solve one of the primary problems with reflective tablet screens, again giving Samsung a nice advantage.

Here’s the announcement event in its entirety:

One of Apple’s big advantages came in the form of their iTunes store with its huge selection of apps, music, movies, TV shows and interactive periodicals. 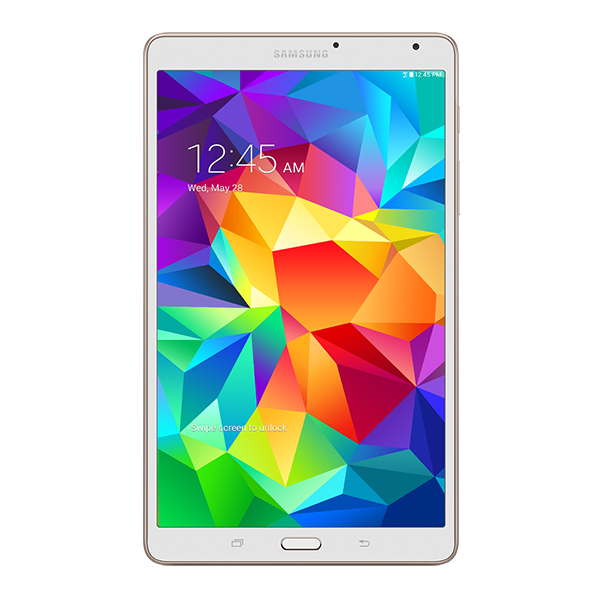 Thanks to Galaxy Gifts, Samsung will give away some free content and reduced price content. They promise over 30 providers at launch. This will include Marvel Comics with a 3-month subscription for free. Readers can get a few books each month from Amazon through Kindle for Samsung. If the selection doesn’t improve over what they offer, don’t get too excited about this freebie. 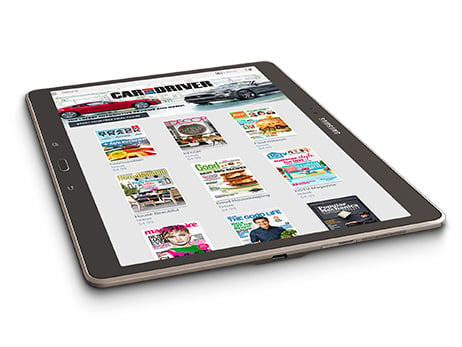 The partnership with Conde Nast will add some options for magazine lovers.

Samsung will partner with Google to offer some free Google Play content, including movies like Gravity and free books or magazines. They also partnered with Netflix to get high-definition movies streamed to the Tab S. 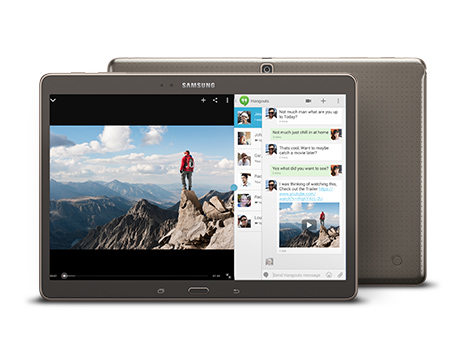 Samsung pioneered the idea of multitasking on Galaxy tablets with the ability to open two apps at once. Apple plans to offer a similar feature in iOS 8 when it shows up this fall. Until it does, the Tab S will have an advantage for a few months. 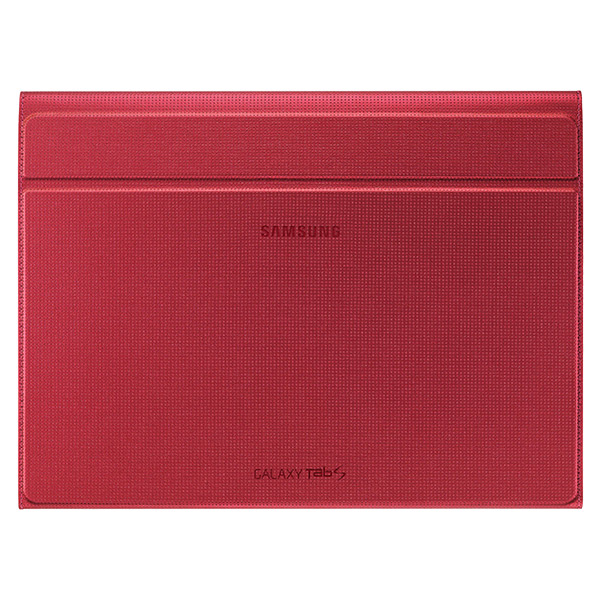 The Book Cover will come in a six colors with three viewing angles.

Because of the iPad’s popularity, the accessory market iPad will still enjoy an advantage. Samsung does plan to narrow the gap with their Book Cover cases for the two Tab S sizes. The Book Cover will come in a form-fitting design and gives users three different viewing angles thanks to the folding front flap.

Samsung will also sell a Bluetooth keyboard designed for each tablet that looks similar to Zagg keyboards for the iPad.

This doesn’t give Samsung an advantage, but it lessens Apple’s lead. Available accessories shouldn’t determine someone’s choice of which tablet to buy. It does make it more interesting if a buyer knows they can still find quality tools to use along their device.

Apple made a big deal of their “continuity” features with the ability to make calls through an iPhone on an iPad. This will also work on the global version of the Galaxy Tab S. Sorry US buyers. We can’t enjoy this feature, likely due to the stringent wireless carriers and their control. It’s sad, because this was one of the most interesting features discussed in the announcement.

The Tab S lets a user take and make calls thanks to their SideSync 3.0 app that runs on a Galaxy S5 and the new Tab S. When someone calls the phone the user can connect to the phone from their tablet and talk through the tablet.

Because this will only work outside the US, it doesn’t offer much of an advantage for domestic users. However, international owners can enjoy the feature, and it makes the Tab S a compelling device.

Samsung promised the Tab S will come June 26th, with LTE versions running on the various carries coming at a later date. Tab S buyers can enjoy their tablet months before they can get their hands on a new iPad. It’s not a good idea to buy an iPad Air this close to the fall when Apple will announce something with more features and better hardware in just a few months.

Buyers can pre-order the LTE versions now at Samsung or at Amazon.