A new basketball from InfoMotion Sports will help players improve their skills, thanks to a number of sensors inside the basketball and apps for iOS and Android.

The new 94Fifty basketball includes a number of sensors that will help quantify a player’s game. The sensors can measure the force of a player’s dribbling, the angle of their shots, the speed of a shot, backspin and more. That data is then transmitted to an iPhone or Android device via Bluetooth.

With the 94Fifty companion app for iOS and Android users can see all of the data the ball collects for them. The app can help players improve parts of their game through customized workouts. That way players who already have their dribbling where they want it can work on their backspin, or the angle of their shots, with the help of the smart basketball and the app. 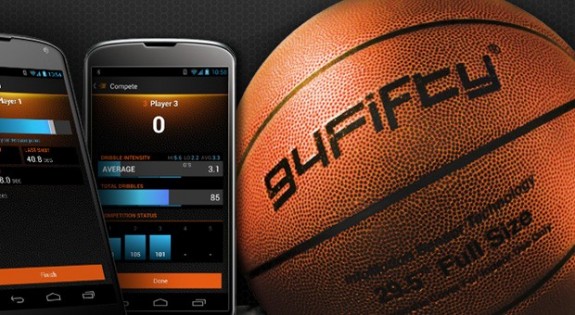 The 94Fifty is the same size and shape as a standard basketball, despite all the extra electronics and sensors inside. To charge the equipment inside the ball, users just drop the ball on its Qi wireless charging station. Wireless charging means the ball doesn’t have any ports that can mess with its shape.

InfoMotion Sports plans to bring the 94Fifty smart basketball to stores sometime in the third quarter of 2013. The ball will sell for $295, which is quite a lot for a basketball, though the sensors may make the price worth it for those who want to make it as a pro player eventually.