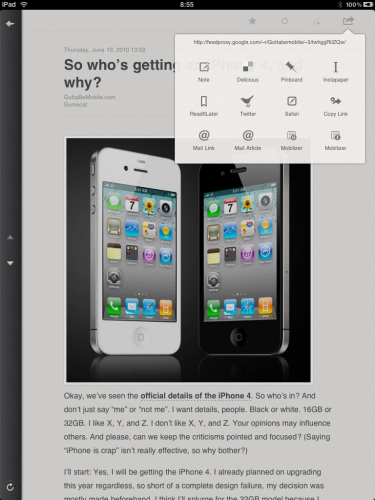 There are two tasks, among many, that I use my iPad for throughout the day that I’m still searching for Apps that make those tasks easier and more enjoyable. One is reading feeds, the other is using Twitter. Two new Apps popped up the end of this past week that, while not perfect, have quickly become my first choices when I perform those tasks.

Osfoora means little bird or female bird and it is a Twitter App. Twitter Apps on the iPad (or any platform for that matter) are a matter of taste depending on what you want to do with Twitter. On the iPhone I’ve been a big fan of the former Tweetie, now Twitter for the iPhone, renamed after it was bought by Twitter. I alternate between that and Seesmic on that device. I use Tweedeck on my laptops and desktop. On the iPad, it has been a frustrating search or wait for a good Twitter App. I try most of them and for one reason or the other they end up getting deleted. Prior to Osfoora HD being released I was using Twitterific and really have no complaints about that App, but you know how the search for something better can get you in trouble. Osfoora HD is probably going to replace it as my iPad Twitter App of choice because of two reasons. One it brings in Twitter feeds faster. Two, I just like the UI more, and so far find it more enjoyable to use.

Feed readers have been getting a lot of attention lately because of the issues with Pulse and the New York Times. I like Pulse quite a bit. It has a great visual UI. But it has its limitations. You can only pull in 20 RSS feeds, and I read quite a few more than that in a day. Reeder is new and its single big advantage over Pulse, NewsRack, NetNewsWire, and others that interface with Google Reader is that it pulls my large number of feeds in much faster. When I want or need to grab a quick look at my feeds, I don’t want to wait for things to load any longer than I have to as my time is often limited these days. The UI is also well done, although some may find it bland. I find it perfect for getting the task of reading feeds quickly. In Reeder you feeds are arranged on the screens as small stacks or icons that represent each folder or feed. You can tap to enlarge each stack and see your feeds (or you can use the pinch gesture to open them up.) From there you can tap on an individual feed to read it. A next and previous button quickly let you go to the next item in the feed. As it works with Google Reader, you can star, share, or do any of the functions that you can do in the Google Reader interface and that syncs across. You can also quickly send an item you’re interested in reading later to Instapaper, another App I use quite a bit. I like Reeder quite a bit and am enjoying getting to know it. Reeder existed as an iPhone App earlier, but I never gave it a look because I used Google Reader instead.

Speaking of Google Reader. I’m speculating here, but any further development on that applications seems to have stalled. I don’t know if it is a casualty of the Google/Apple wars (anyone with an Android device let me know if the experience is any different on that platform), or if there just isn’t interest in moving it forward. It’s a shame really as the mobile interface on the iPhone still works well, but that same mobile interface on the iPad is just not that great and intriguingly the web interface just doesn’t work well with the iPad at all. Google Reader was (and probably still is) a web app used by many, but Google’s lack of development on it lately has left the door open for Apps like Reeder, so I’m guessing it is all a good thing in the end. 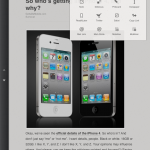 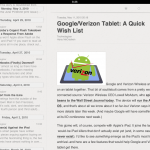 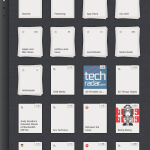 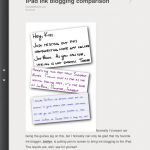 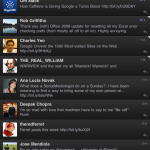 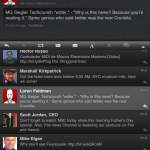 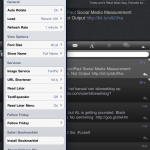 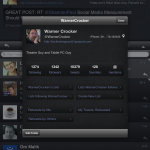 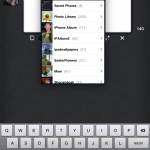 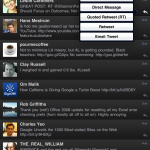 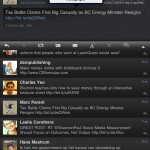