A new report says that Google is watching on its own version of a smart watch, a form factor that’s picking up momentum with rumors of Apple and Samsung developing their own wrist companion to the popular smartphone market. A Google-branded Nexus watch comes as Google is already venturing out in bold new wearable computing form factors with its Google Glass project and a new Google shoes concept that was recently on display at South by Southwest, an interactive conference in Austin, TX. 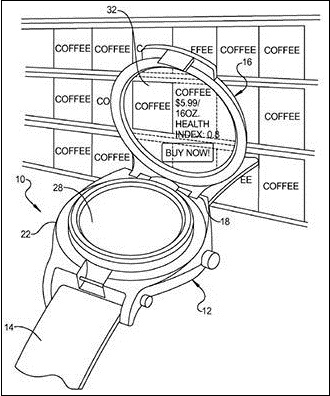 A Nexus watch idea would not only compete against big players like Apple’s and Samsung’s much anticipated and highly rumored forthcoming projects, but would also eat into smaller markets of fitness-inspired wristbands, such as the Nike+ Fuelband, the Jawbone Up, and Fitbit, along with popular companions such as the Pebble smart watch.

According to a report on the Financial Times, the Google-branded smart watch is currently being developed by its Android arm, which may suggest Nexus branding. This is different than its more ambitious projects, such as Google Glass, which will ship to developers at a $1,500 cost. As the watch is being developed by the consumer-centric Android arm, it should be more affordable.

It’s unclear what special innovations or functionality Google’s wrist-strapped Nexus accessory may debut with, but a patent filing from the Android-maker in 2011 shows a design with a flip-up display and a tactile user interface along with cameras.

“A variety of portable user devices provide wireless network connectivity. Various features of a device often require a user to access the device at inconvenient times to perform a desired function. As a result, a user may simply not employ the device to its full capabilities.”

One major challenge that Google, Apple, and Samsung will have when pursuing the smart watch category would be battery life. Pebble is attempting to overcome battery life with its watch by using an e-ink display, which is more conservative on power drain. Pebble, however, is still facing supply shortages and isn’t widely available despite a successful Kickstarter campaign that resulted in overwhelming demand.

Still, with recent technological innovations, having a small 1- or 2-inch display may be feasible more today than it was a few years ago. Thanks to voice-controls, more sensitive capacitive touchscreens, and cheaper sensors and components, a smart watch would be easier to use and package in more functionality. Google could allow users to have some control over the watch with their voice through voice control access that’s found on Google Now.

Google’s partner Samsung, which is increasingly becoming a threat to the Android empire, is rumored to debut its own smart watch. The company’s Altius UI was recently uncovered and it’s unclear if Altius will be a separate OS from the Android operating system that powers the company’s Galaxy lineup of products, or if it will be an overlay, similar to TouchWiz.

In recent months, there’s been speculations of increasing tension between Google and Samsung. Google’s acquisition of Motorola Mobility may have been the cause of some of that tension, though the Android OS-maker is now feeling threaten that Samsung, the largest Android OEM, may wield too much power in the ecosystem. Samsung’s move to release smartphones with the competing Tizen OS may not be cooling matters much either.